Average score from 2 reviews and 18 ratings 86 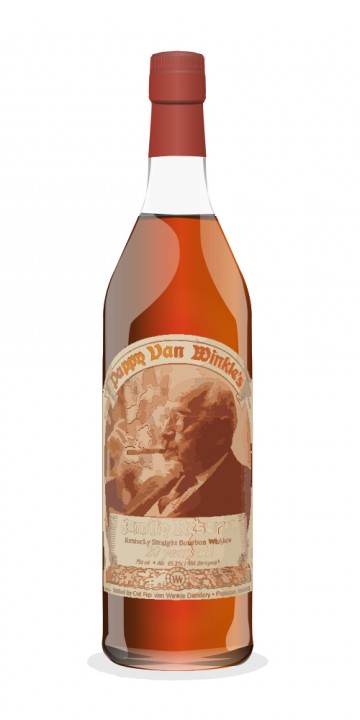 Pappy Van Winkle 20 yo Bourbon is, like all of the Van Winkle Bourbons, one of the 5% or so of bourbons which are made with wheat instead of rye as the "flavoring grain". This bottle was distilled at the old Stitzel-Weller distillery which closed about 20 years ago. Sometime in the near future Pappy Van Winkle 20 yo Family Reserve bourbon will be distilled at the Buffalo Trace distillery. The Pappy 15 is already as of the Fall 2011 release completely distillate from Buffalo Trace

The reviewed bottle has been open for 9 months

Nose: fragrant wheat combined with old oak. There is a unique and remarkable way which oak blends in with the flavours of wheated bourbons. The idea that oak 'gets in the way' of the grain flavours has to be completely modified in the case of wheated bourbons. Wheat and oak are synergistic in a way in which oak is not synergistic with any other grain commonly used to make whiskey. The oak flavours here are spicy and rather cinnamon/cassia-like. In the nose, as in the palate, this Pappy 20 is a mellow rather than an aggressive bourbon. This is a beautiful nose

Taste: oak, maple, wheat, and sweet maple sugar blend together on the tongue for a mellow, delightful, and mild-mannered relaxing experience. The flavours are adequately strong, but mellowness is the by-word. Delicious

Finish: moderate-to-long, with all the flavours remaining throughout. This whiskey is all about mellow reflectiveness

Balance: the bottle from which this came has unfortunately shown signs of adverse deteriouration after only 9 months open. This surprised me greatly, because I have found the younger 15 yo version of Stitzel-Weller produced Pappy Van Winkle to hold up with virtually no change to its flavours for 18+ months after the bottles have been opened. In the case of this review, I had decanted a separate sample which showed no signs of the deteriouration which the main bottle is now showing. I am reviewing from this sample. I have had previous samples from restaurants of PVW20 which I did not enjoy as much as I have enjoyed this bottle prior to the onset of oxidative deteriouration. I am well aware of the spotty reception that Pappy 20 has received in various quarters. This bottle for me was wonderful. I have had samples in the past that I did not think equal to this bottle. I also think that the character of all of the Van Winkle bourbons, and particularly the lower proof Van Winkle bourbons, such as Pappy Van Winkle 20, is such that sampling is easily thrown off if any strongly flavoured foods or beverages are consumed closely before them. If you want to get the true and most enjoyable picture of any Van Winkle bourbon, sample it on a very empty stomach, first in your queue, and spend a little time with it. Then you will understand why there is a cult following for this brand

Nose: expressive. Immediately mentholated. Slightly bubblegummy / cotton candy, some darker sugar, very big notes of varnish. Tobacco and old leather. Vanilla and other more powerful spices (white pepper). Much more oak than commonly found in bourbon, but still within the limits. Slightly dusty. Mouth: hmm interestingly weird. Not very complex, pretty much on burnt caramel and liquid wood extract (does that exist?). A bit too much oak I’m afraid. Pine trees with pepper and big hints of herbal cough syrup. Unique but rather flat, lacking richness that I do find in other bourbons. Finish: not very long, woody and resinous.

I had this bourbon only once, and it did not draw me strongly. The Pappy Van Winkle 15 yr old, on the other hand, is absolutely exquisite, provided that you understand what you are getting, a wheated bourbon with no rye which provides high and middle notes, with no real base notes. It does not really matter, though, in this case, for what you have is what I call "the champagne of bourbons". The 20 yr old by contrast is to the best of my memory more weighted down by the oak aging. A batch of this comes out each year in the USA in October, and within a few days to a few weeks it is bought out and then unavailable until the next year. My Austrian brother-in-law who hates wheat in his beers and hates all other wheated bourbons loved the Pappy 15 yr.