Average score from 2 reviews and 6 ratings 75 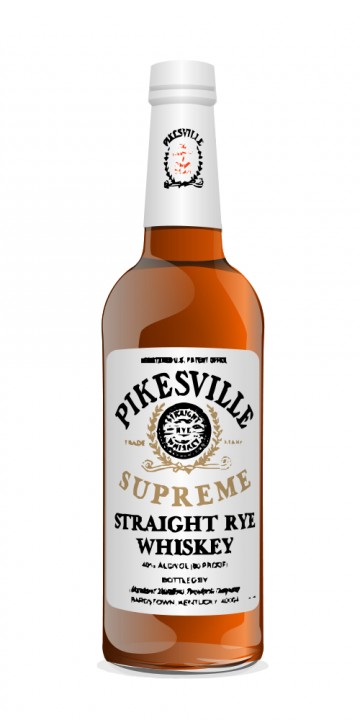 Pikesville is a Straight Rye Whiskey, from the stables of Heaven Hill from Bardstown, Kentucky. Originally this distillery was founded in 1890, but perished during the Noble Experiment from 1920 until 1923. In 1934 the Shapira family reopened it and runs it until this day. The mashbill for Pikesville consists of 65% rye. In the States it is mostly used for cocktails and is dirt cheap.

The nose is light, but also somewhat bitter. That luckily disappears quickly to make room for vanilla, coconut and lavender. Mildly spiced on ginger and nutmeg. It remains grainy though. Leave it for ten minutes and nothing will be left. Carton creeps in.

On the palate is balances between watery and oily. The rye now speaks louder with a voice of pepper, nutmeg and even some chili. Vanilla and coconut again, but also very grainy. Too much so to be good. A hint of raisins.

The finish is medium long and soft, but the bitterness is much louder than the sweetness.

This one is on par with Heaven Hill’s Cabin Still bourbon. Mix or miss, for this is bottom shelf stuff.

Taste: very clear, very clean, crisp rye flavours. The wood flavours are also surprisingly strong for only 3 years of aging. This is a bright rye. The big shortcoming is that the body is light and thin. This is more dilute than I would like.

Finish: fairly long, keeping the spice and wood flavours until the end.

Balance: the flavours here are excellent and clear. It is unfortunate that they are not more concentrated. This whiskey is good as it is, but would be fantastic at barrel proof or at 53.5% ABV/107 proof.

Baltimore word is that standard 3 yo Pikesville Supreme 40% ABV rye is being discontinued. Too bad. Batch by batch this one could be just ok, or it could be very good indeed. A good bottle well opened up could well be an 87-88 point whiskey. The current and presumably last almost 700 bottles of it in my county are still being sold for $ 12.95 per 750 ml., up from $ 8.65 per 750 ml four years ago. Maybe there will even be a closeout price now?

There isn't much incentive anymore for Heaven Hill to sell an inexpensive young Pikesville rye, now that they know that their 6 yo product is popular.