@OdysseusUnbound Me too. They do sherry really well.

@BlueNote My B-I-L an did a Tomatin series with a miniature set. I have to say I was less than impressed. But that was a long time ago and palates evolve... So does whisky...

oops...meant this comment for this thread, not the other one...

My wife and I attended a virtual Michter's tasting with the Seattle Whiskey Collective. Michter's Master Distiller Dan McKee presented the following;

Kentucky Straight Rye - All of their Rye's are single barrel. This is a low rye mash bill (they don't release percentages). More Bourbon-like on the nose. The rye comes through in the finish. Also notes of cherry and oak. This was probably my favorite of night, but the 10 year Bourbon was a very close second.

Kentucky Straight Bourbon - Dan said this approximately 5-7 years old. Not as sweet as the rye, surprisingly. It had a "smoky" note on the nose which I liked. There were also notes of caramel and vanilla. It was good, but was number 4 out of the 5.

Unblended American Whiskey - This was even more bourbon-like on the nose. With also corn and vanilla. The palate had caramel and vanilla with dried fruit. This was my least favorite.

Original Sour Mash - Cinnamon, butter and almond with a pepper finish. To me, this one had the most bourbon-like profile of the night and it was #3 out of the 5.

10 year Kentucky Straight Bourbon - This is the 202o release and per Dan, it is much older than the stated 10 years. It was definitely the most complex of the night. Nose was red licorice, waxy and some grass notes. The palate was toffee, maple syrup, caramel and vanilla. This could easily have been my favorite of the night. It was a very close 2nd to the rye.

After the tasting, started playing on-line poker with my Brother-in-law and some of his friends. Continued with the American whiskey theme.

@bwmccoy Shame they did not include the Michter's Barrel Strength Rye, it is as good as a barely legal Straight Rye as there is, IMO.

@BlueNote I adore the Tomatin 14 Port Casks. The wine doesn’t overwhelm the malt, which is far too often the case. I reviewed it here. connosr.com/tomatin-14-year-old-port-wood-…

I’m currently at my mother-in-law’s celebrating her 65th birthday. I finished my Tomatin 12 and brought a Bowmore 12 as a replacement. I often forget how much I enjoy Bowmore, despite it being the bête noire of many an Islay enthusiast. Yes, the 12 year old is only bottled at 40% abv, but while I’m sitting with family drinking “casually”, that’s totally fine.

Enjoying a dram of this special edition of the Compass Box Great King Street Glasgow Blend. Really very nice. A good blend done right is as good as anything. 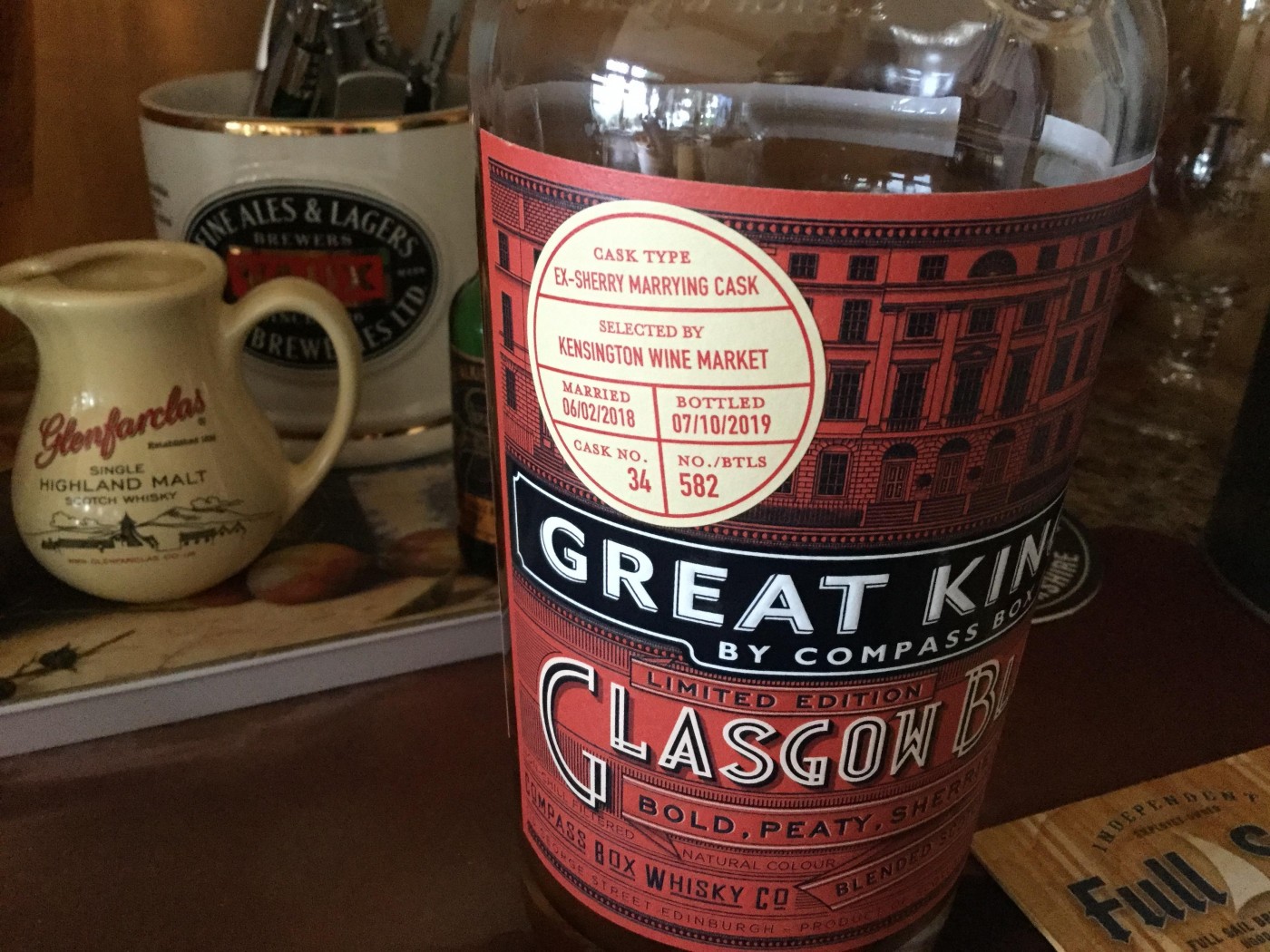 @OdysseusUnbound Great review, I just re-read it. Must try and find that Tomatin.

@Nozinan I think you have to be a bit choosey with Tomatin. They are certainly not all good, but when they’re good they’re very good. They had a couple of distillery only casks in their visitor centre when we were there that were stunningly good. You could fill your own bottle, and I would have, should have, but I was already loaded up for the trip home. And you’ll relate to this @OdysseusUnbound, my wife was saying “I think you’ve got enough, don’t you?”

@Astroke - I would have preferred more rye options, but it was still fun to go through the lineup that we did! 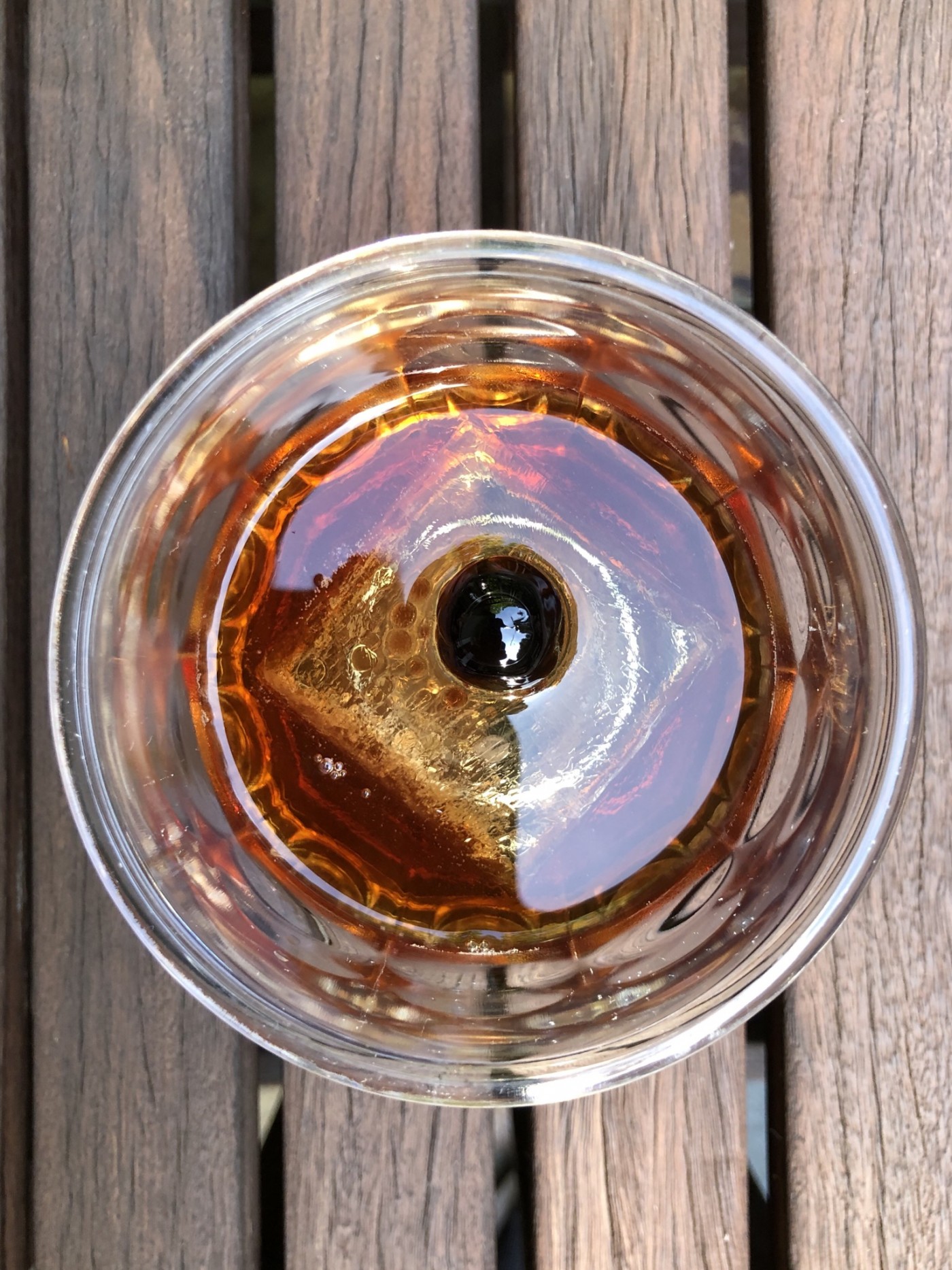 Impromptu zoom get together I was invited to. I had to choose between watching the Raptors rally to beat Lebron's Lakers or spend time online with Connosr friends. No question there. The basketball games are much too stressful to watch

While we chatted I had a small pour of Amrut Cask Strength special 2007 edition. This is my favourite batch of the cask strength. I'm glad I have same as backup. My collection is too big but I hear there are still a few of these in some stores in Calgary and if I ever saw one I would probably grab it.

Tonight's pre-dinner cocktail for my wife and I; Jerry Thomas Manhattan's.

Later, rated the last two of my unrated open bottles;

9 days ago 1Who liked this?

Last night's (Sunday) pre-dinner cocktail for my wife and I was the “Gunpowder and Smoke” cocktail. The drink is dry gin, egg white, lemon juice and homemade gunpowder liqueur.

After that, was still in the mood for gin, so made my wife and I Gin & Tonic's.

@bwmccoy Another one of those obscure distilleries I have had no experience with. It sounds interesting. What did you thInk?

@BlueNote - Braeval holds a special place for me. (Braeval was originally named Braes of Glenlivet, but changed their name in 1994 to avoid confusion with the Glenlivet distillery. The two distilleries are not related. Another fun fact, Braeval is the 2nd highest distillery in Scotland. It is 2nd only to Dalwhinnie by a mere 4 feet.)

Anyway, when I joined the Society in 2007, the price of your 1st year membership included a bottle of Society whisky, but you didn't get to pick the bottle. The Society sent a random bottle with your welcome kit. My first bottle was SMWS 113.14 which was the 14th cask from distillery 113; Braes of Glenlivet. Fast forward to January 2019 and the Society released SMWS 113.15. Which means in the 12 years that I had been a member at that point, the Society had not released another cask of distillery 113 until then. I had to have it for that reason alone.

Earlier this year, at one of the tastings that I was leading for the Society, one of the bottles was 113.24. I still have some of that one open, left over from the event, but it is getting pretty low. I wanted to try 113.24 head-to head with 113.15, so I opened that one last month.

Probably more background than you wanted, but getting to what you asked about; When I opened 113.24 at the event, I was blown away by the nose. The name of that bottle is "Attack of the killer florists" and it is appropriately named. It was like smelling a flower bouquet. It is only 7 years old, but everyone at the tasting was surprised how complex it was for its age. Unfortunately, with the bottle being open several months, some of the nose and complexity have diminished, but it is still a fine dram, especially in summer time.

The one that I had last night (113.15) is called "An apricot jamboree" and it too was very appropriately named. Apricot on steroids. It is 9 years old. When I drank them head-to-head, I was impressed with how different they were; floral versus fruit, however, they were from the same distillery and from the same cask type (ex-bourbon barrels), even though the floral one was from a 1st-fill and apricot was from a refill. Like the killer florist bottle, the apricot is also a lighter whisky style than what I would normally prefer, but they are both quality drams with some complexity that I don't normally attribute to lighter spirits. Would I have purchased them if I didn't have the emotional connection to the distillery? Probably not. Well, except for the killer florist one because I got to try it. All of that to say, both bottles are very good, quality whisky that are perfect summer time drams.

Here are the tasting notes from the bottle label; "Vibrant fruit combined apricot jam with apple sauce and ripe plums while the palate released ginger snap biscuits and creamy vanilla".

Sorry. I didn't mean to write a novel, but as you can tell, I could chat about whisky all day.

@BlueNote - Guess I will now need to cut you in on the royalties when it is released.

@bwmccoy, excellent post, thanks for sharing....and @bluenote, thanks for asking him about (distillery) 113.

No idea what I'm drinking. @Fiddich1980 dropped it off yesterday and I was looking at getting a preliminary taste. It smells like a whisky but not so sure of the taste. This will be an interesting blind and twisted tasting.

5 days ago 2Who liked this?

5 days ago 1Who liked this? 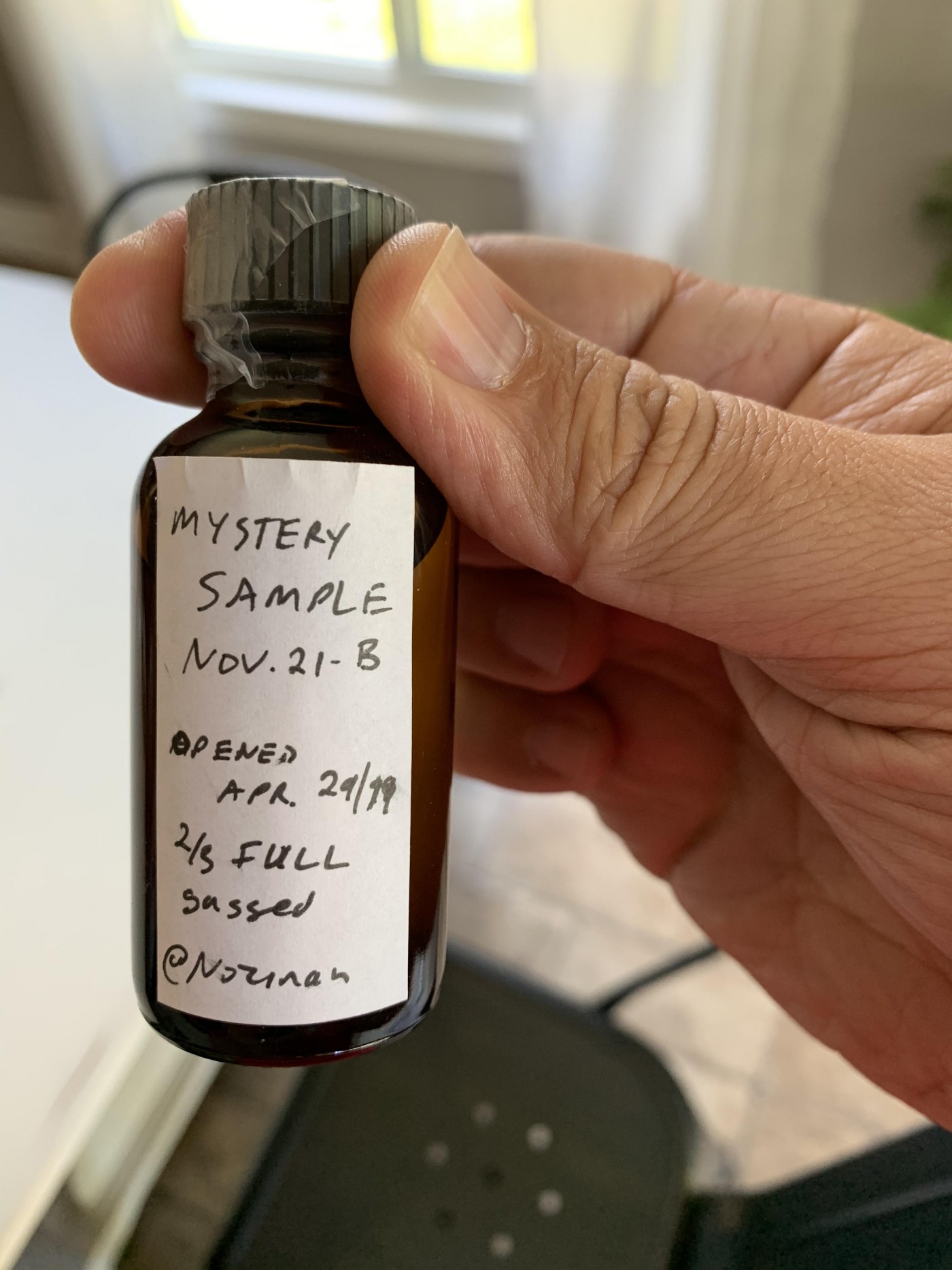 I had a nice lunch today at my non-Connosr sister's house. To go with the food, I had a taste of a few things in my brother-in-law's cabinet:

4) Ten High Blended Bourbon, a Barton distillery product. This bottom shelfer I have never had the pleasure of having tasted. I was a bit scared and thought that it might be pretty horrible, but you know what, this extremely simplistic and sweet beverage was actually quite charming, despite being blended bourbon-- meaning probably 49% grain neutral spirits. In the right mood, or if someone were hopelessly addicted to alcohol I could see a person sucking on this from morning to night. $ 17.43 buys you 1.75 Litres of this stuff in my neighbourhood, or $ 9.80 for a 1 litre bottle. .

5) Gilbey's Gin. Better than I expected. Quite serviceable, really.

6) Don Julio Reposado Tequila. This old bottle seems to have milded out over time. Still nice, but oh so sedate.

Lunch with my two sisters and a brother-in-law. Good times!

4 days ago 6Who liked this?

We had some friends over in our backyard. Rare is the opportunity to drink with someone in person. He wanted something peated. I served (and had some) Octomore 10.1

Maker’s Mark Cask Strength. This one is almost gone and tonight it had a buttery note that I don’t remember tasting before, but it was lovely.

Ardbeg 5 year Wee Beastie. This one just keeps getting better.

@bwmccoy, Ahhh, the buttery note found in a Maker’s Mark. Sometimes hand-warming helps to bring it out, but usually it occurs after the bottle mellows. I had my best Maker’s experience a few years ago in an airport lounge. I’ve yet to find another as buttery, bright, rounded, and well balanced.