@Nock I'm so pleased that you've opened the Deanston and that you're enjoying it. The standard Deanston 12 is now a staple on my shelf as a casual sipper and palate warmer upper. I've been so impressed with what they are doing - I'd love to be able to try some of their special releases. Enjoy, @Nock

Tonight, started off with a Jerry Thomas Manhattan.

@paddockjudge I am a fan of Pikesville 110, Kentucky Owl and Michters Barrel Strength Rye are my 2 American Rye favorites though.

@Astroke, @Nozinan, @MRick Day Three on Lot No.40 Dark Oak 100% Rye. I’m finding it a bit friendlier. One thing is for sure, Hiram Walker Star Special Rye has a lot of character. It won’t let the new oak dominate.... clash of the titans!!

There is definitely some Motown Muscle in Lot No.40 Dark Oak Rye!

2 months ago 7Who liked this?

Last night, I did a head to head tasting of both Jameson standard release and Jameson Cold Brew in order to rate the cold brew. I have previously rated standard Jameson at 75. The cold brew is better, but is also very unique, so I rated it a 79.

I finished the night with a dram of 2Bar Spirits (Seattle, WA) Straight Bourbon Whiskey - 50% ABV.

The last of my Jameson Caskmates: Beau's Edition in a Dubliner, which is another Manhattan variant using Irish Whiskey, Rosso Vermouth, and Cointreau... 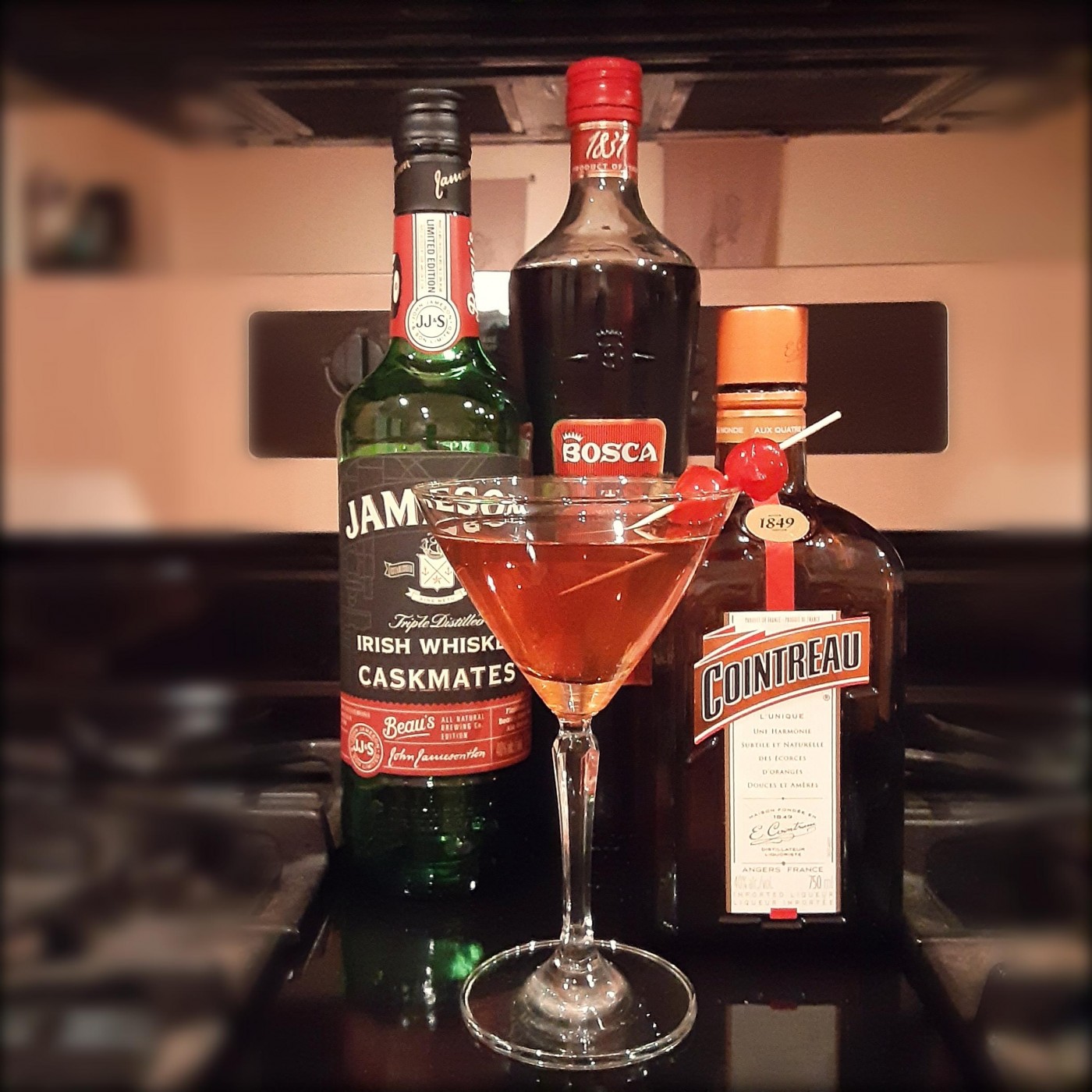 @OdysseusUnbound Love the sound of that Cairdeas. Haven't been able to get one out here for love or money.

Tonight, started off with a Black Manhattan.

@BlueNote When the Cairdeas Fino was first released, I was only able to get one...but I guess the speculators thought it would skyrocket in value overnight, and when it didn't I was able to get a few more for the original price. Right place, right time I suppose. If we ever get the pandemic under control and we can meet up for a Connosr tasting, I'd be happy to share some with you.

@OdysseusUnbound That’s one I would have happily bought if I had ever set eyes upon it. I was only able to get the Madeira version.

Beam Blended Whiskey in honour our American friends and their bizarrely timed Thanksgiving. The sample was provided by a friend...but seriously, 72.5% of the blend is grain neutral spirits?!? 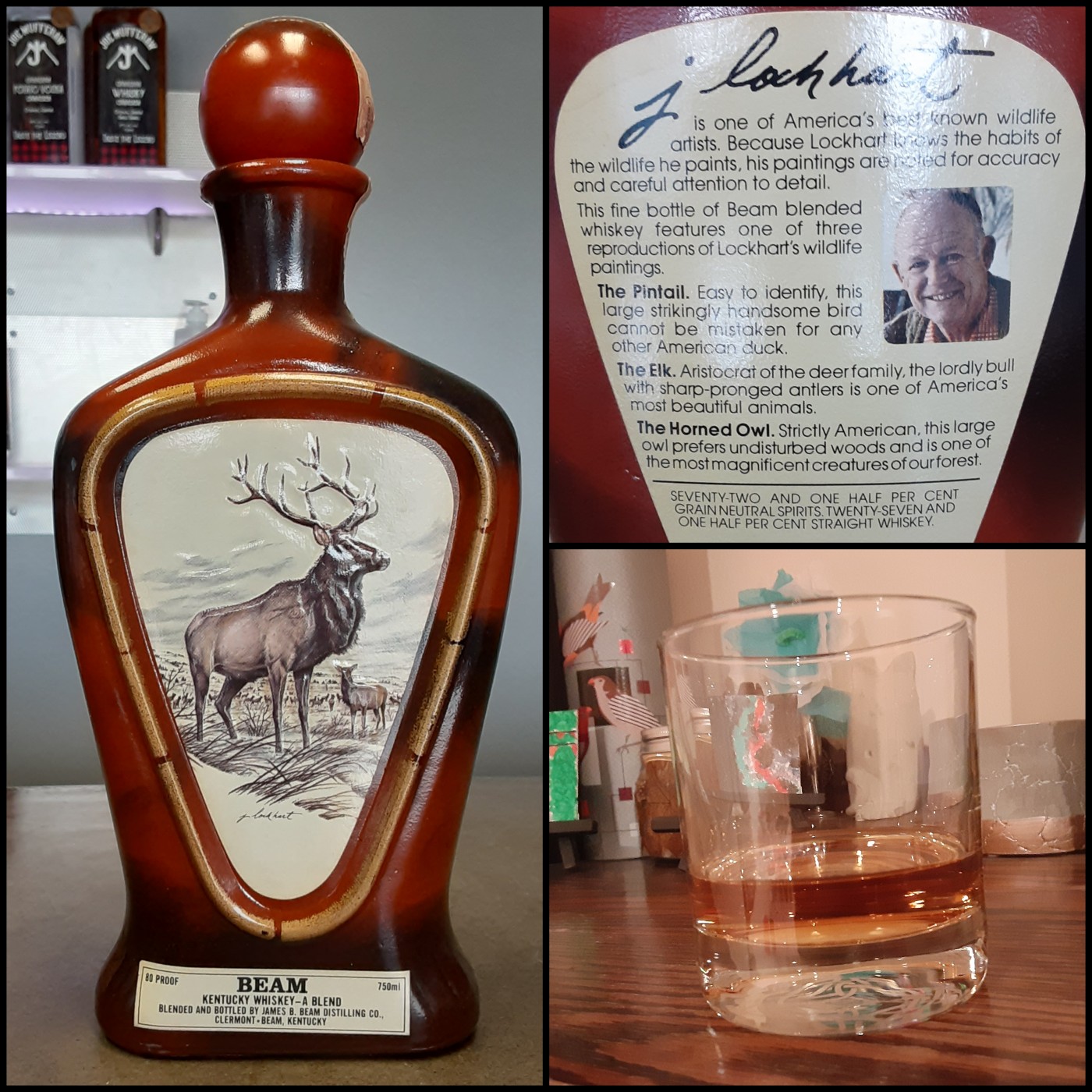 @cricklewood This is delicious ... thanks for picking it up. 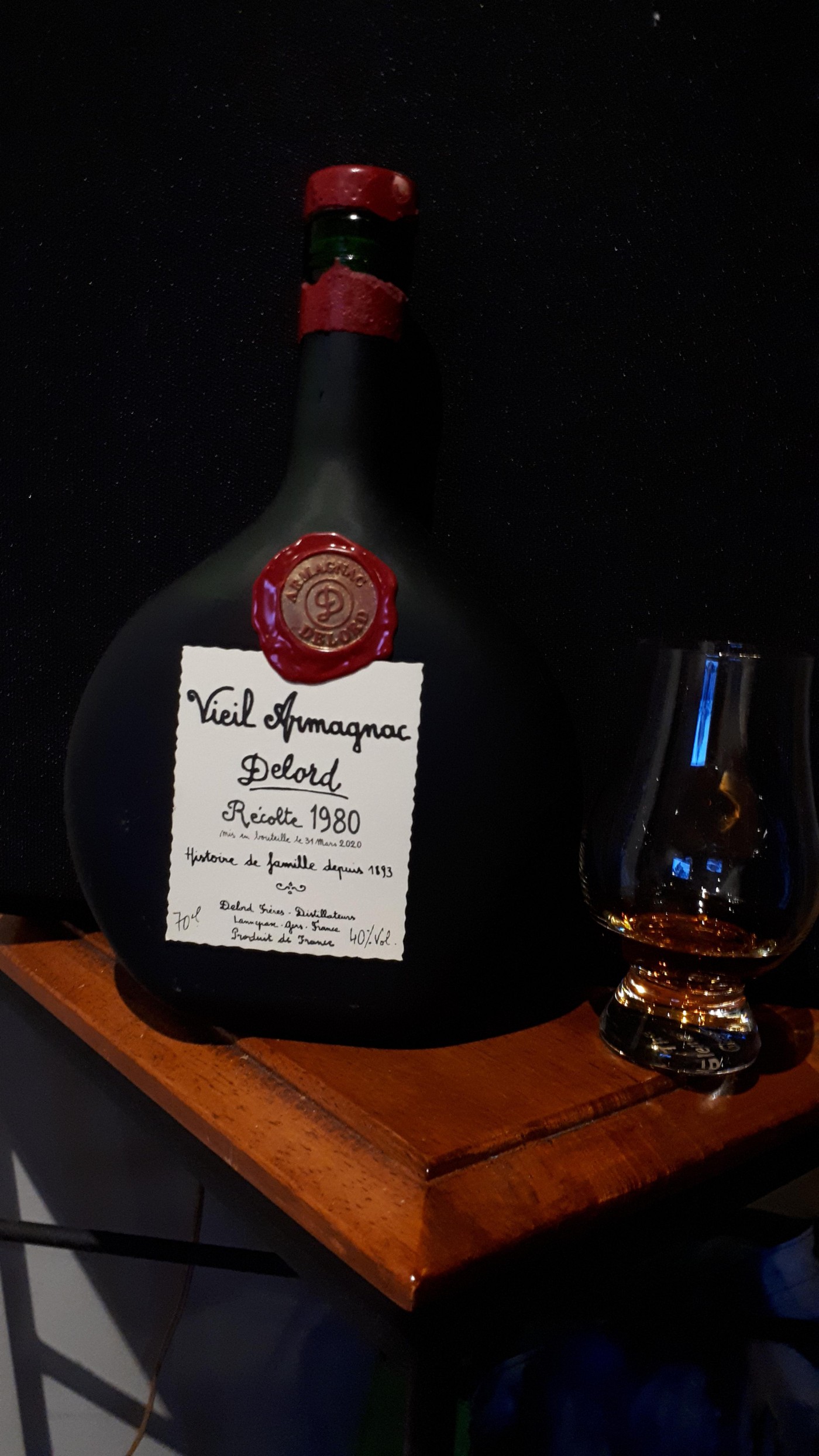 I’m having a pour of St Lucia Chairman’s Reserve “The Forgotten Casks”. After much searching, I’ve found that it contains no additives (except E150a). Hurrah for that ! It’s got a lot of things I enjoy in a rum. It’s sweet but not cloying, it’s got plenty of darker notes like dates, blackstrap molasses, toasted oak, nuttiness, with just a touch of fruitiness. Now if only it was bottled at 46% abv or higher. Oh well, can’t win them all.

@OdysseusUnbound That’s a very kind offer. I would love to meet up with my eastern malt mates sometime.

@fiddich1980 I appreciate the opportunity to have sampled it. As @paddockjudge has said in the past, the nose on a really good Armagnac can surpass that of many malts. This one is totally in line with that but also has a great palate/finish.

This has also convinced me that my plan to venture more into rum & Armagnac next year is a good one.

After the Forgotten Casks, I moved on to Foursquare Premise. This one has gotten much better with time. The offensive aromas (sulphur?) have all but faded and what’s left is a fruity and lovely rum.

While throwing together some Lima beans+smoked chicken leg in the pressure cooker for my supper I put together a little rum blend 4/1/1 Appleton 8, Smith & Cross & Plantation Xaymaca. I put some away to mellow and drank the rest while prepping. The Smith & Cross really dominated, I think I should use less, even on the palate it's got an acidic edge that can easily push things in one direction.

This blend idea came about when I was doing a head to head of Appleton 8 & Xaymaca last week end blended both together. That result was quite good.

Finishing things off with a tiny pour of Kilkerran 8 CS recharred Sherry, I figured it would stand up after the rum.

@OdysseusUnbound I haven't had a Chairman's Reserve in a while, I remember liking it and it reminded me a bit of Mount-Gay at the time but I'm sure I wouldn't see it that way now. St-Lucia can produce some interesting rums, I was recently reading some info about their distillery site on cocktail Wonk cocktailwonk.com/2019/08/…

I was led there because I was researching Trinidad Distillers and their short lived use of a pot still, which they ended up shipping to St-Lucia (they were owned by the same company at the time). These last few weeks I think I've delved a bit deeply in the world on pot-stills and distillation techniques.

This evening I'm working on the last few precious drops of a couple of favourites. First longrow RED 11 port. A twofer as I had the first pour in a cup if glüwhein and the second one straight. Currently sipping in some Amrut peated CS.

I know many of you are in America, are you familiar with glüwhein?

A very tasty Old Fashioned made with Bulleit 10 with the first part of dinner (we're having a 'date night' when the kids have gone to bed). Used syrup for the first time and preferred it.

2 months ago 5Who liked this?

Yesterday, before Thanksgiving dinner, I split firewood all afternoon. As a reward, I poured myself a 2017 release of Firestone Walker's (California) Velvet Merkin; a barrel aged Oatmeal Stout. I do not like most barrel aged beers, but this one is amazing. At 8.5%, it is not boozy at all, but has wonderful notes of chocolate, vanilla and caramel on top of standard stout notes. This beer is aged for a year in ex-bourbon barrels from Heaven Hill, Woodford Reserve and others.

With our traditional Turkey dinner, we opened a bottle of 2016 Bergstrom Gregory Ranch (Oregon) Pinot Noir. This is our favorite winery from this region.

At the end of the night, opened up a couple of Society bottles that I've had in the cabinet for a few months;

Allt-A-Bhainne SMWS 108.14 (7 year - Nov 2011) "An enjoyable curiosity" - 2nd-fill ex-bourbon barrel - 66.2% ABV. This is a lightly peated Speyside dram. The nose has very little hint of smoke, but does have notes of vanilla, candy, cocoa and some pepper. The palate reveals gentle smoke, embers and ash, gummi bears, chocolate and licorice. With water, the nose had lime, toasted marshmallows, seasoned wood and leather. The palate is now nutty with cereal and honey sweetness balanced by smoke, burnt sticks and ash.

Caol Ila SMWS 53.325 (7 year - Mar. 2012) "When two powerful pearls meet". After six years in an ex-bourbon hogshead, finished in a refill ex-Madeira hogshead - 61.2% ABV. This one has it all, as far as I'm concerned; a peated Coal Ila finished in a Maderia cask; sweet, balanced smoke. The nose has notes of grilled shrimp, smoked salmon and prosciutto ham. The seafood notes continued on the palate with smoked tuna, but it also has a Mediterranean feel to it. With water, the nose is aromatic peat smoke, ocean spray, seafood and tar – quintessential Islay! The palate is now sweet smoke; smoked scallops and a hint of Maderia wine with dessert in the finish.

2 months ago 9Who liked this?

@ajjarrett Have you tasted the new version of the Glendronach (oloroso & PX) side by side with the old (oloroso only)? Also, if my arithmetic is correct, the 2020 version should be the post-shutdown version of the 18.

Unfortunately, I coudn't compare the two 15yos side by side. I gifted what was left of the 15yo Revival Oloroso before returning to the US, since a friend of mine thoroughly enjoyed as much as I did. I will say that 'Re-Revival' is quite enjoyable and although it doesn't hit all of the 'right buttons' for me compared with the other, I am still glad I have a bottle of it. I am not sure I will be eager to get another any time soon.

As for the 18yo, yes, you are correct the release of the 18yo I have was bottle this year, back in June. Thus, it would have been (I believe with some confidence) that the 18yo whisky in this bottle was made from spirit that was distilled and then put in casks once it re-opened. However, without know all of the details, like other whisky out there there could be older whisky in the bottle, but in this case just much less than previous releases of the 18yo.

If you go on Youtube, many reviewers talk about the old stock that went in the 18yo and the 15yo and other bottlings. They also talk about how Glendronach has a huge fan base, but maybe not as big as the likes of Ardbeg, but because of this and other marketing schemes are selling their stuff at inflated prices. What do I make of this? Not much. As long as I can justify a a bottle or even a couple, in my budget, with the fact that I enjoy what is inside, I will get it. I never owned a bottle that was released before 2020, and only had a sample of one when I was in Tokyo a while back, I am not too worried about what is falling short with the current release compared with the bottlings that came before.

In short, watching and reading too many 'opinions' online (and taking them too seriously) can be damaging to my drinking. HA!

If someone asked me if I would recommend it, I would say what many of us say, "Try before you buy" and then I would pour a dram so that could be possible.

A comment related to the topic of this thread:

I didn't have anything to drink last night except for water. I was planning to pour myself something, but I got caught up re-watching Foyle's War and forgot. I am glad I don't have a drinking problem. I might have a problme remembering to drink, which is almost worst.

65+ whisk(e)ys, rums and fruit brandies over 3 days at my sister's house and at my niece's house. I needed to hang out 3 nights with my sister to catch up on my sampling. My sister's spirits collection makes mine look small. Good times!

Very encouraging was that multiple years after-bottle-opened air exposure has led to at least 3 bottles in my sister's cabinet going from "meh" to fully good.

Over time I have developed a huge affection for plum brandy/Slivovitz.