@Victor, I too embrace the long daylight period as well as the long nights of late December and January, in fact, I book more than half of my annual vacation at these times. Tomorrow I begin a thirteen day stretch away from work and in December an 18 day stretch. Each session allows for plenty of research into one of my favourite subjects

@paddockjudge it was right around the winter solstice of 2012 when I first met YOU in Toronto.

It was the day before the winter solstice in 1985 when I married Julie. We honeymooned in Canada, of course, Vieux Quebec.

My wife and I, despite the extremely hot temps, are enjoying a dram of Laphroaig 10 CS batch 13, because nothing will stop her from her Islay whiskies. I’m honestly pretty impressed. I’ve been sticking to beer and ice cold sangria recently. This is a delicious whisky though!

Is the batch 13 a good batch? I have a batch 5 open and a 7 in the bunker and decided to pull the trigger when the 13 came to Ontario (first time for a Laphroaig C in my memory). But the price tag was a bit rich. And I declined to buy the 14 when it was released less than a month later.

@casualtorture there is something delectable about CS Laphroaig on a hot day. I have always been a fan of that indulgence. It's therapeutic, in the style of tropical cultures loving extremely spicy food, or of doing a sweat lodge.

I've not had a bad batch of it, batch 9 was my favorite if memory serves me. This batch is a little less umami and a little more citrusy, and I prefer the more umami ones. But glad I got it. I generally get 1 per year, whichever batch is floating around at the time.

@casualtorture You’re lucky to have it floating around so often…

@Nozinan I have heard that the 13 is better than the 14, that coming from a couple Laphroaig lovers. FWIW

A very large pour of Springbank 10 and it is slipping down a treat! The industrial notes in it made me think of a famous old Steeplejack from my home town, Fred Dibnah. It smells like I imagine he would have done after a Friday night down the pub.

For those that have no idea who I'm on about, I'll add a link. Skip to 14 mins in to see him at work. The phrase balls of steel comes to mind

@RianC. Nice dram and a fitting reference to a legend mate. Cheers.

Russell's Reserve and a slice of peach pie... 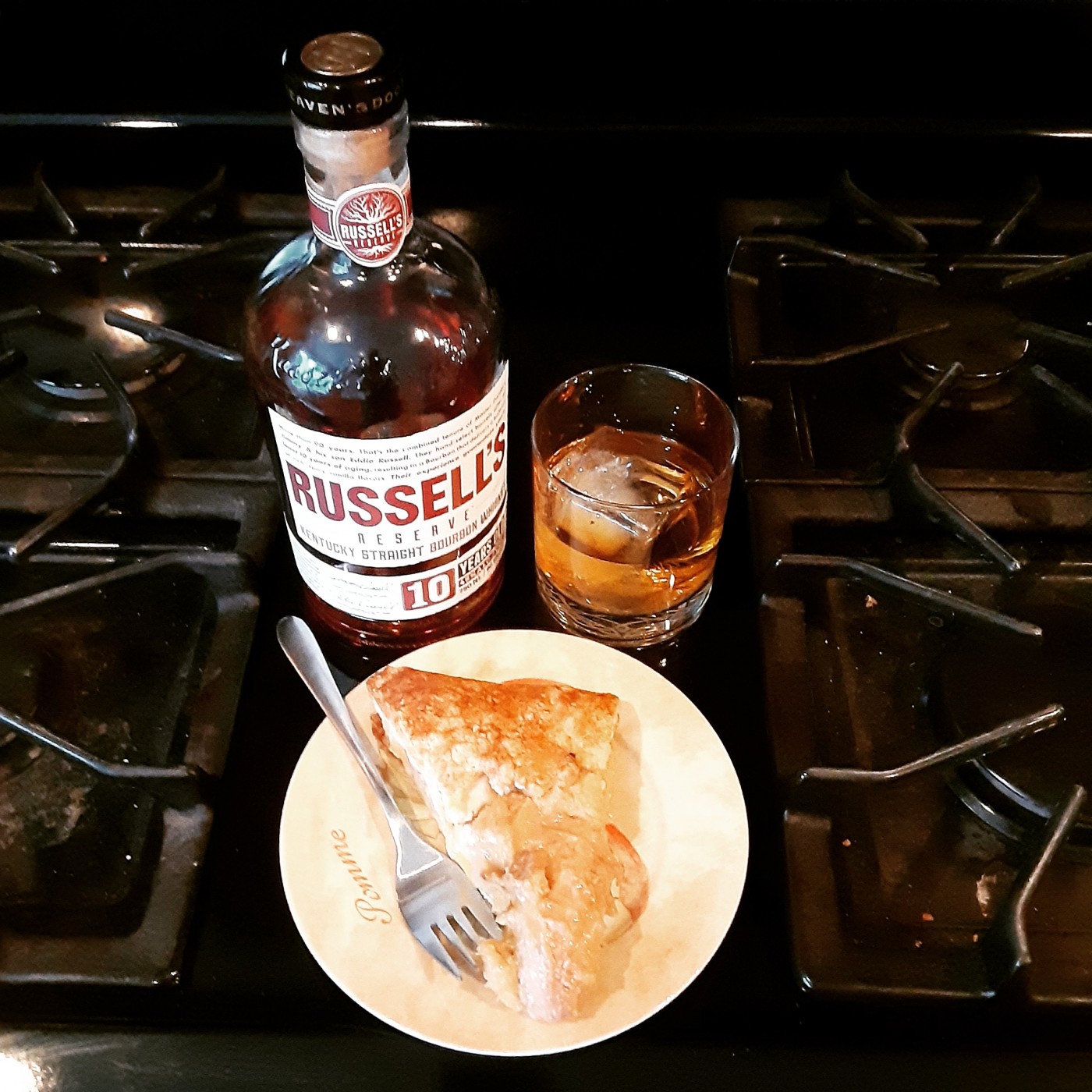 @YakLord, A great pairing!...mmmm peach pie. I had Booker's and shortbreads.

I tried to have a dram tonight. A’Bunadh batch 53. I can smell and taste that it is a Sherry-matured CS whisky. I might guess it is Aberlour, but certainly not as flavourful as the tastes I had before my infection.

As Lucien Bouchard said “On continue”… or something like that.

Attended the Whiskey Thieves Exclusive Barrel Pick Night at Sagamore Spirits Distillery last evening with my wife. Got to taste 4 different cask strength rye whiskeys and then vote for our favorite. I picked #156 as my favorite and #179 as the runner up. My wife picked #179. At the end of the evening the votes were tallied and #156 won so it will be bottled and sold in July. 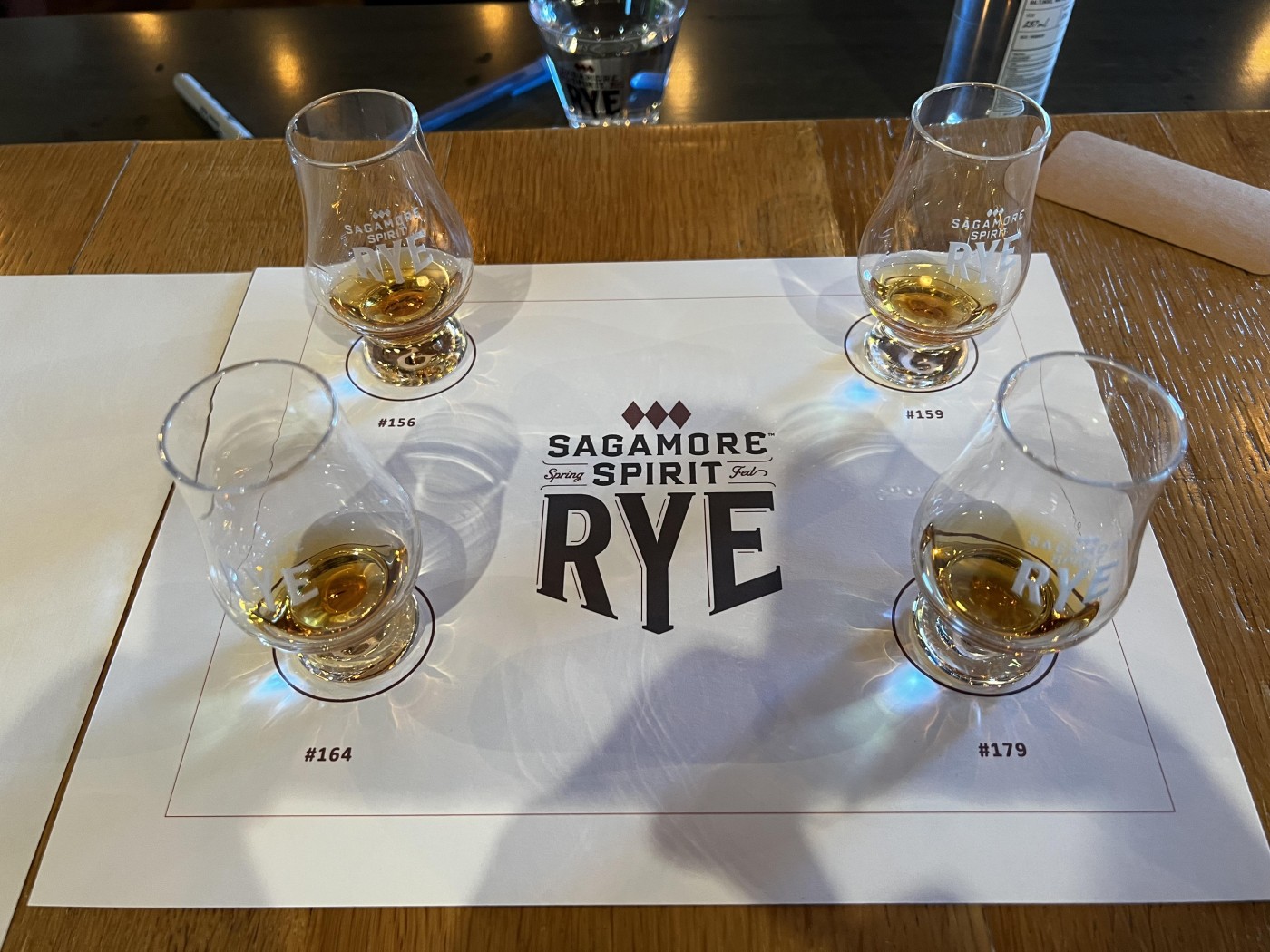 @TracerBullet so, 5 years after the Sagamore Spirit Distillery opening I am guessing that these are actually barrels from their own distillate which you sampled. Did they confirm that?

I've tasted several Sagamore Spirit labeled ryes to date, but so far have not had the experience to see what their actual aged distillate tastes like. It is impossible for me to have an opinion of this distillery until I can taste what THEY themselves actually made. I have known for 10+ years that MGPI products are of high quality. I am looking forward to seeing what the quality of this latter-day Maryland producer will be.

I see that 91% of Trip Adviser reviews give the Sagamore Spirit distillery tour 5 stars, and an additional 8 % give it 4 stars. That is certainly an excellent sign.

@Victor I asked that question while I had the chance last night. They expect to be completely switched over from MGPI to their own juice by 2025. What we tasted last night was still MGPI juice. I have the tasting packs from all 3 of the Penny’s Proof events and have been impressed with their progress. At the final event we had the opportunity to purchase their limited release of a BiB that was juice produced in Maryland by them. Again, I was impressed. I have had better rye whiskey from other distilleries and I have definitely had worse. I am optimistic that Sagamore will be producing a rye that will be pleasing to many. BTW, I also talked to them about the tours as well. They have a pretty good standard tour but I told them I was hoping for a tour similar to those I have had in Scotland where you could pull samples directly from casks. He said they were looking into making that happen but the laws in Maryland have prevented them from doing some things like that. I know that is a problem in Kentucky too. Sagamore is working toward offering different levels of tours. They just need to sort out the legal side. 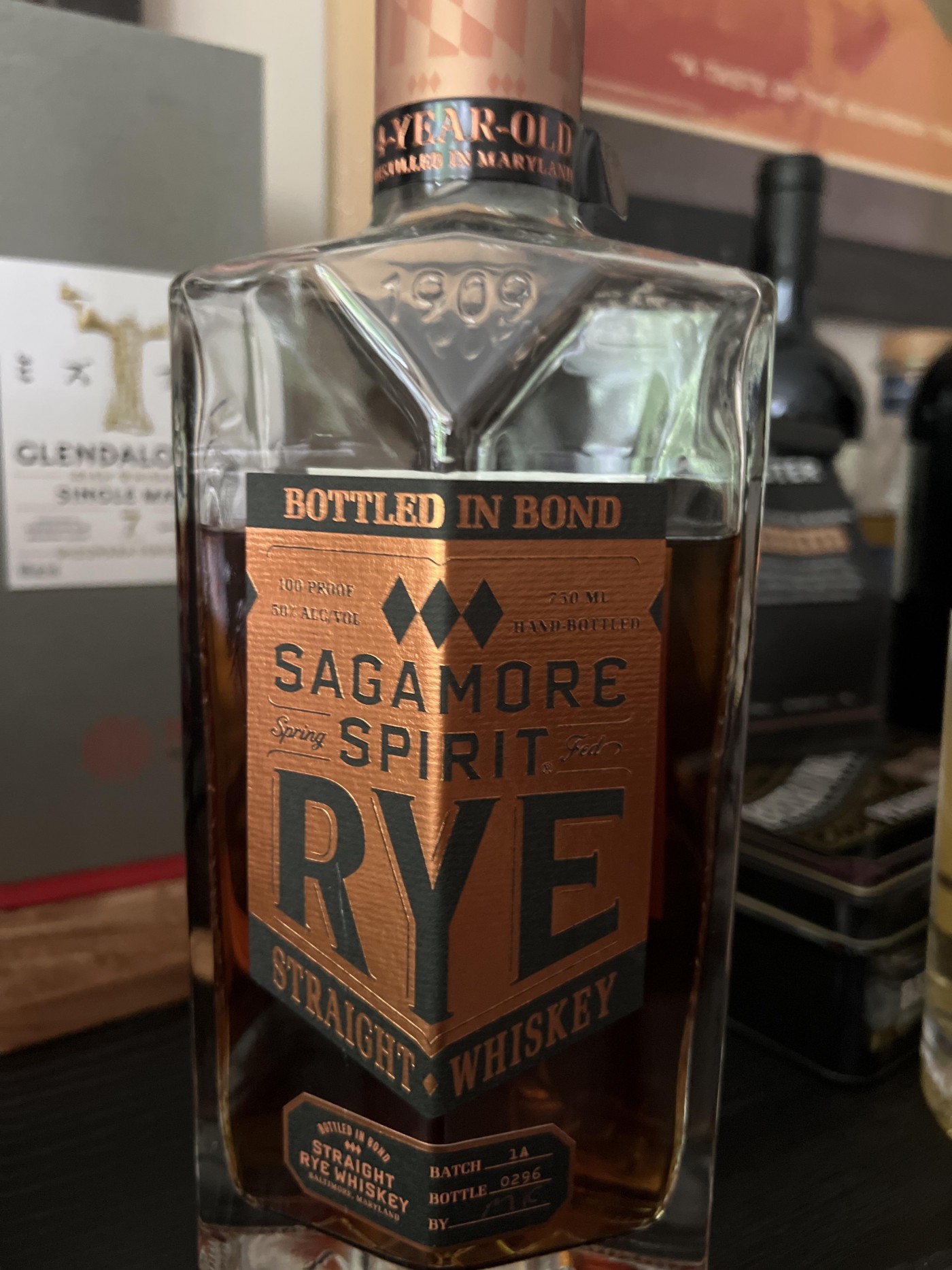 @TracerBullet thank you very much for your very prompt and thorough response!

You have told me what I wanted and "needed" to know.

@TracerBullet is that the Glendalough 7 finished in Mizunara Oak? How is does it compare to the 13 years version?

So far we have tried the 13 (which we love) and the 17 (which is good but lacks the Mizunara influence found in the 13).

Not sure when she is going to crack that one open but when she does, I will report back.

A sample courtesy of @paddockjudge, "Tomatin 1988 Batch 2, 46%". A solid 90/100 - perfect balance of fruit/berries, spice, and oak. Some would consider it boring but, the nuances are enhanced with time and subjective focus. This is tuning fork balanced, and clean distillate.

7 days ago 6Who liked this?

I am enjoying a dram of Glen Scotia 15 years old. Yes, a dram from the other distillery on Campbell Town. I like it very much. It is fruity ( apricot, oranges), sweet and salty. I taste some vanilla as well. Cheers.

@Victor, I find most distillery releases of Balvenie to contain too much water, Tun 1401 being an exception. The 17 YO Doublewood is a nice whisky. I’m pleased to have it in my cabinet, but I’ve not purchased more than this one bottle. The Caribbean is also a fine example, but again, too much water for me. Tun 1401 Batch 9 is, as you put it, “polite and mild-mannered”; however, it does make a loud statement… top shelf, well balanced, considerable complexity. When Batch 9 walks into the room, everyone notices.

When I purchased this whisky, it was at that time the most expensive whisky I had ever bought, $359. Found, discovered, unearthed in Jupiter Florida (while visiting Tiger Woods lol) while reviewing whisky-porn photos taken by my vacationing son. There were desirable dusties on the shelf, old Springbanks and Macallans which had been neglected, most likely because they were expensive, and now had some appeal as (the original price tags were drastically underpriced) this shit is difficult to find. I was drawn to these and placed an order for one of each. A couple of days later I noticed a bottle of Tun 1401 hiding amongst the rows of tins, tubes, and boxes… and then another in a different section of the store. I immediately sent a message to my son, drop the original order, buy both bottles of batch 9 AND ASK IF THERE ARE ANY MORE!!

There were only two, I gladly paid the asking price and opened one of the bottles at his wedding six years later.

I’m sipping on Batch 9 while preparing this response. It is every bit as good today as when it was opened nearly two years ago. It is unfortunate the Covid lockdown and travel restrictions prevented us from tasting this bottle together at the wedding… it wouldn’t have stood a chance!

I recall numen’s review at whiskybase, he scored it 91. I scored it 92. I must say our interpretations align almost perfectly.

Having recently acquired some cask strength bourbon cask Balvenies (Teaspooned), I can now better appreciate the mix of “Traditional casks”, which are ex-bourbon and bourbon refill I presume, and Sherry butts. Perhaps a nearly impossible task, marrying both styles and producing a stunning result.

A beautiful and elegant whisky is Balvenie, regardless of the style of cask employed. Port, Sherry, Bourbon, and Rum casks have provided me with highly enjoyable experiences.

Cheers!…. with a Balvenie !

@paddockjudge My first taste of Balvenie was near the beginning of my whisky journey, maybe 2011. After a Ralfy video I bought a 15 YO single cask for my uncle. We really liked it and I bought one for myself (I "think" it was the same batch) and it is buried deep in the bunker. I then had a taste of another batch at a family event in the US.

I was disappointed when they switched to the 12 YO version. Same ABV (so likely more water added). In my opinion it should have been CS.

@Nozinan How I miss that 15 year old. One of those that I berate myself for not stocking up on at the time.

Last night I had Compass Box artists blend and then a Laphroaig 10 to follow. Lovely batch of this one tbh. Cheers all..

Balvenie 10 yo Founder's Reserve, 43% ABV. @paddockjudge yes, I certainly do like Balvenie, which is why I have bought 8 different types of it, the 6 recently mentioned plus 12 Doublewood and 14 Caribbean Cask.

This little Founder's Reserve is quite a honey. When it was discontinued 10 years ago there were howls of protest from its many fans, I among them, that it was superior to both the 12 Doublewood and the 12 Signature. I made a point of buying extra bottles of this one when I had the chance, back in 2012 and 2013. I do not regret that decision.

The Balvenie 10 yo Founder's Reserve is now a collector's item, currently averaging $ 307 worldwide asking price. It was a $ 45 bottle back in 2011.

3 days ago 7Who liked this?

@Victor I miss the days of finding random returns of that Balvenie on the shelves of the LCBO. Can’t recall the exact discounted price, but I did pick up a few at under 30$ CAD….

The days of picking up dusties or returns at the LCBO are sadly long gone. I did snag a Bowmore Devil’s cask (III) once. I called and they held it. They said the phone was off the hook since I had called.

Even discounts for discontinued expressions are snapped up so quickly now they are almost a non-entity. The fact that I remember when you alerted me to the discounted Amrut single casks, and the time Wiser’s 23 CS went from about $150 to $105 suddenly and inexplicably, making it accessible for some and stock-upable for others, speaks to how rare those occurrences are. Some places like Alberta have occasional dusties but they are become rarer than Hens’ teeth.

2 days ago 6Who liked this?