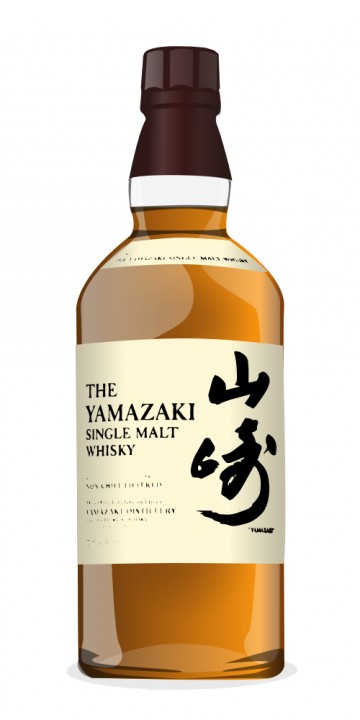 This Yamazaki Puncheon is almost legendary. Especially if you can believe the price evolution of this NAS whisky. When it was launched in 2013, the bottle cost around 125 EUR. Today you need to fork over 1,500 EUR! A puncheon is larger than an ordinary hogshead, because it’s a cask of about 480 liters. In it, this Japanese single malt was matured and then bottled in 2013 at 48%. I consider myself lucky that I got a sample of this, because unfortunately I can no longer afford a bottle. Fresh and lively, I have to say. The nose is bursting with white fruit with pears in the lead, followed by some peach and banana. Juicy pineapple. All typical notes for a bourbon barrel, but at the same time all very light. This is a real spring whisky. The mouthfeel is good. Very lively. It dances on the tongue on vanilla, peach and pears. Now also a touch of orange. Make that bergamot. A little floral. Potpourri? Coconut and mirabelles join in. All very fresh, though. Very pleasant, but it has to be said: not exactly earth-shattering. Just very tasty and completely flawless and a textbook example of maturation on a bourbon barrel. The finish is medium length, on licorice and ginger. Don't get me wrong: this is very tasty. But the price was actually already on the high side at the time; today, that's ridiculous for what you get. And the title: that's just Puncheon in Japanese.

Before we begin with this review, I would like to direct your attention to the Whiskypod video review I did for this whisky back at The Whisky Show in October 2010, which can be found here: www.connosr.com/whiskypod/video/tws251

I have always been a fan of the Yamazaki whiskies, from the 10yr through the 12 and 18yr expressions, so when I found the Suntory stand displaying another expression it was going to be tough to keep me away!

This is a special edition from Suntory, aged in a huge Puncheon cask rather than the standard one, and lacks any age statement. To smell it you get a stronger kick compared to the other Yamazaki malts, there is a lot more going on within the glass compared to the relative simple nature of the others.

As noted in the video review, I have always found the Yamazaki malts extremely smooth and easy to drink, however this one has an extra dimension to it, more body and a stronger taste to it. Not that it’s a bad thing, it’s refreshing to see the Suntory guys make such a change (at least in my eyes) to what they are putting out under the Yamazaki name.

It has a long and powerful finish, which hammers home the fact that it isnt your typical Japanese malt. Worth a try for something different, but its not my favourite from them.