Tonight a few of us (members of Connosr and others) had a video tasting hosted by @JasonHambrey.

This is in the context of an initiative to purchase some casks from a small micro-distillery near Ottawa called North of 7. I had not heard of it before this idea came up, and I don't know much about the distillery. This was my first time participating in a cask selection.

There 10 samples from 10 different casks. One cask was 100% malted barley spirit, one was 95% rye, and the rest were either 3 or 4 grain with different proportions of each grain. Char and toasting levels varied, and the ages of the spirits were between 3.3 and 5.5 years.

We tasted (mostly from youngest to oldest), first at a dilution of 1:2 whisky:water (about 20%), then 2:1 (about 40%), and then we tasted them at cask strength. Then we sent our rankings to our host, who will let us know which cask will be bottled, and which cask will be selected for further aging (with future tastings to determine when it is time to bottle).

While I acknowledge I am a bit player when it comes to purchasing bottles, I'm grateful to have been invited on the journey... 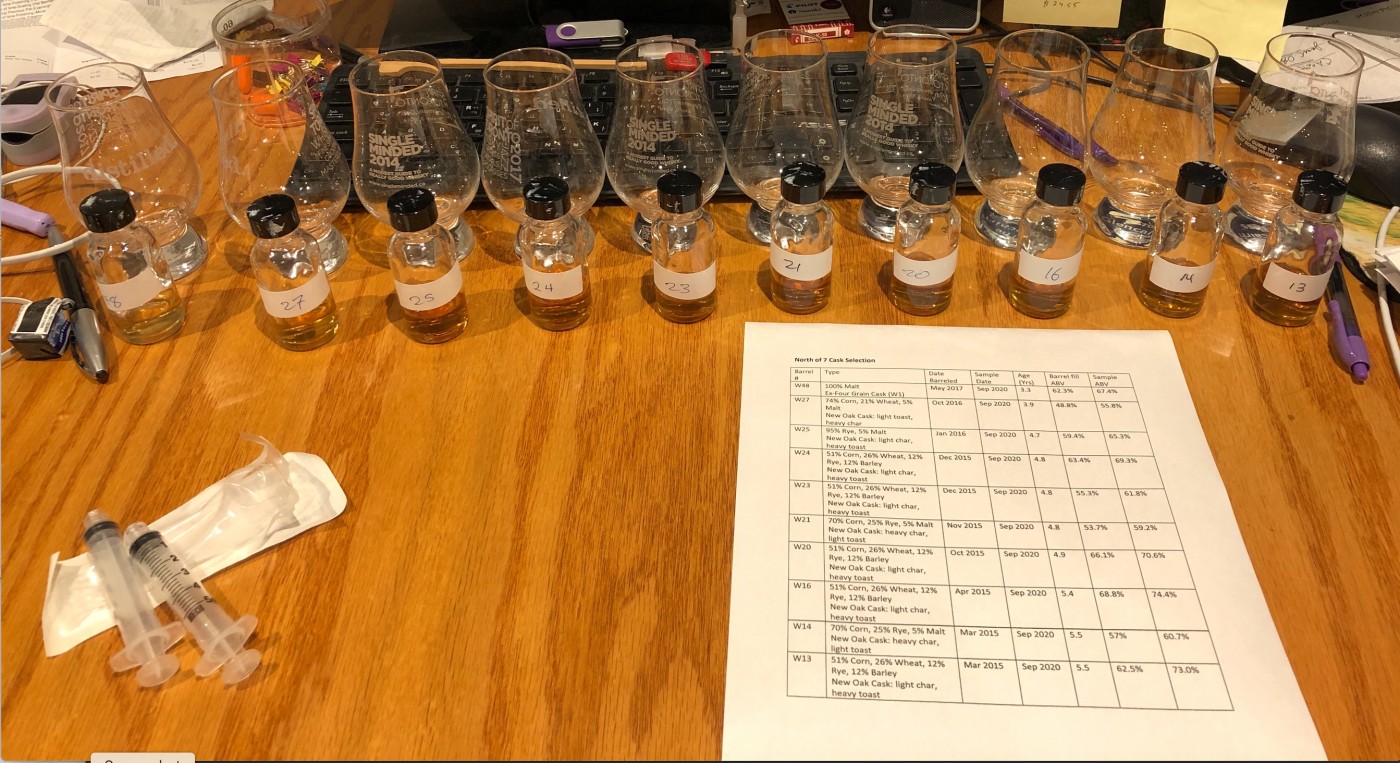 @Nozinan I'd call that epic.

@Nozinan North of 7 are good people. They also own the rock gym where we climb (the gym came first). Jason had brought up the cask thing with me a few months ago, but it wasn't something I was interested in as my cabinet rarely has the same bottle in it twice and I wasn't sure where I'd store that many bottles...was there a definite favourite out of the samples?

@YakLord, I too was in attendance for the virtual barrel pick.

A BIG THANK YOU to **North of 7 Distillery for making this possible.... and a tip of the hat

to Jason Hambrey (www.insearchofelegance.net) for putting this together. Jason, you are an excellent web host!

The Goal was to select two barrels; one for bottling now, and one for further aging to be bottled later. The process took three hours to get through 30 evaluations, 3 flights x the same 10 barrels at different abv.

My two top selections were both sweet mash (bourbon-style) four grains. They ticked the boxes at each of the three abv levels. I found only three of ten barrels hitting the mark at each of the differing strengths.

Here is a pic of my before (highlighted) and after notes..... looks a lot like my pre-race analysis sheets when I was a rail bird. 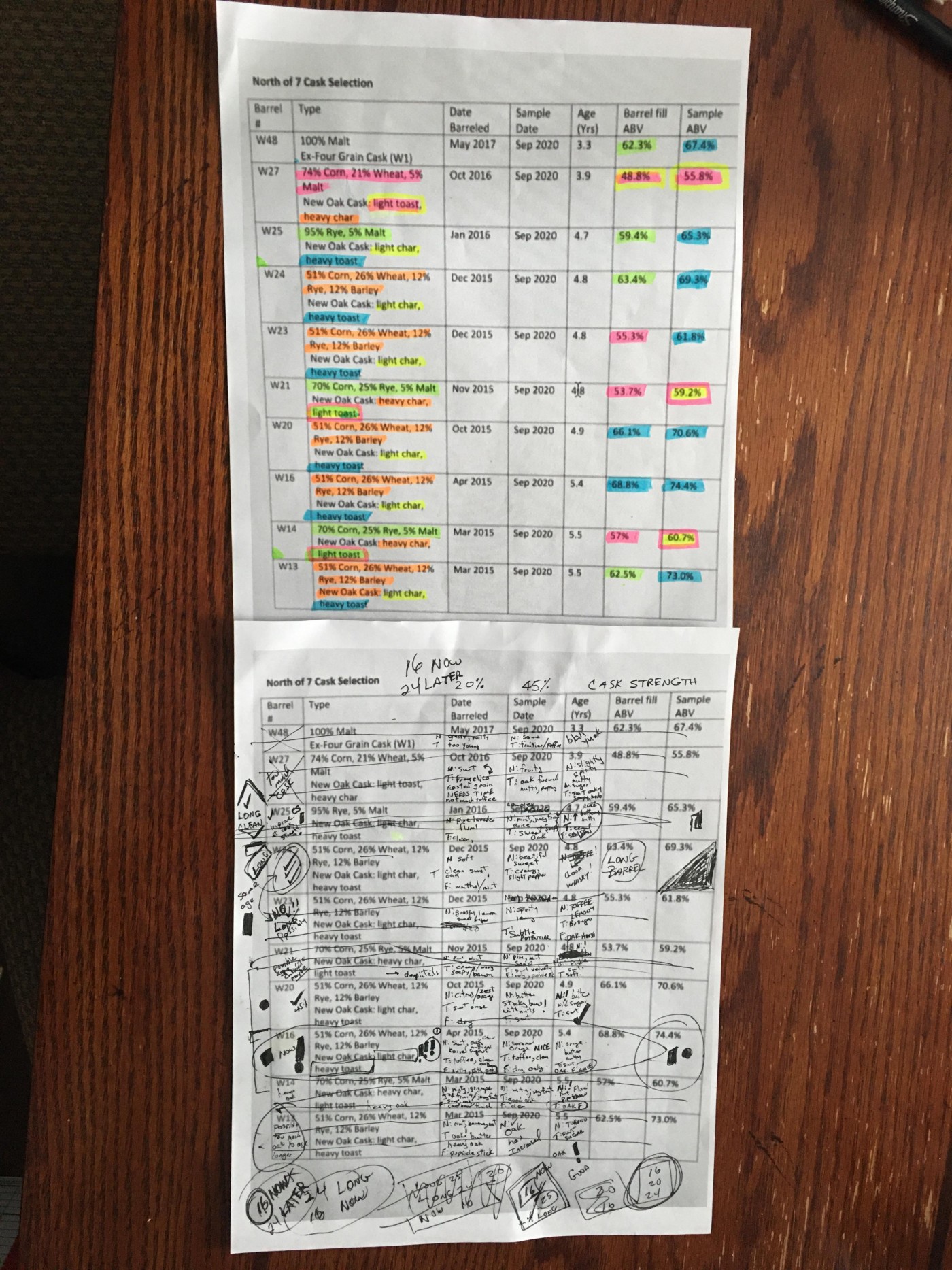 @paddockjudge Unfortunately, I couldn’t “attend”, and a few members here might attest to my spotty record in terms of attendance.... but I’ve let Jason know I’m definitely interested in purchasing bottle(s) of what the group decides on.

Tonight was the much anticipated Milk and Honey tasting.

I brought home 2 expressions in December 2019 and since then was able to accumulate another 4, some thanks to my late brother in law @Nosebleed.

It took a while to sample them all up and send them out but I finally got myself in gear and early this months the last of the bottles arrived where they needed to.

We started with the Newmake spirit, which anchors all of the expressions (the gin is made from the same base spirit). Then we moved to the Young Malt, described on the label as the last one (before a 3 YO was released in 2020). Then we tried the 3 year old classic malt. This one tasted years older than its age.

We then switched gears to the unaged and wine cask STR aged gins. I believe theirs is the only gin with za’atar as a botanical. The consensus, I think, was that the unaged gin was the favourite.

Finally, we ended with the distillery cask bottling. The oldest of the expressions at 3.5 years, it was matured in an ex-Islay cask. A fitting end to a great tasting.

Thanks to @paddockjudge, @JasonHambrey, @fiddich1980, @cricklewood, @talexander and @astroke for participating. We also had guest appearances from my brother, and a very young future connosr.

5 months ago 9Who liked this? 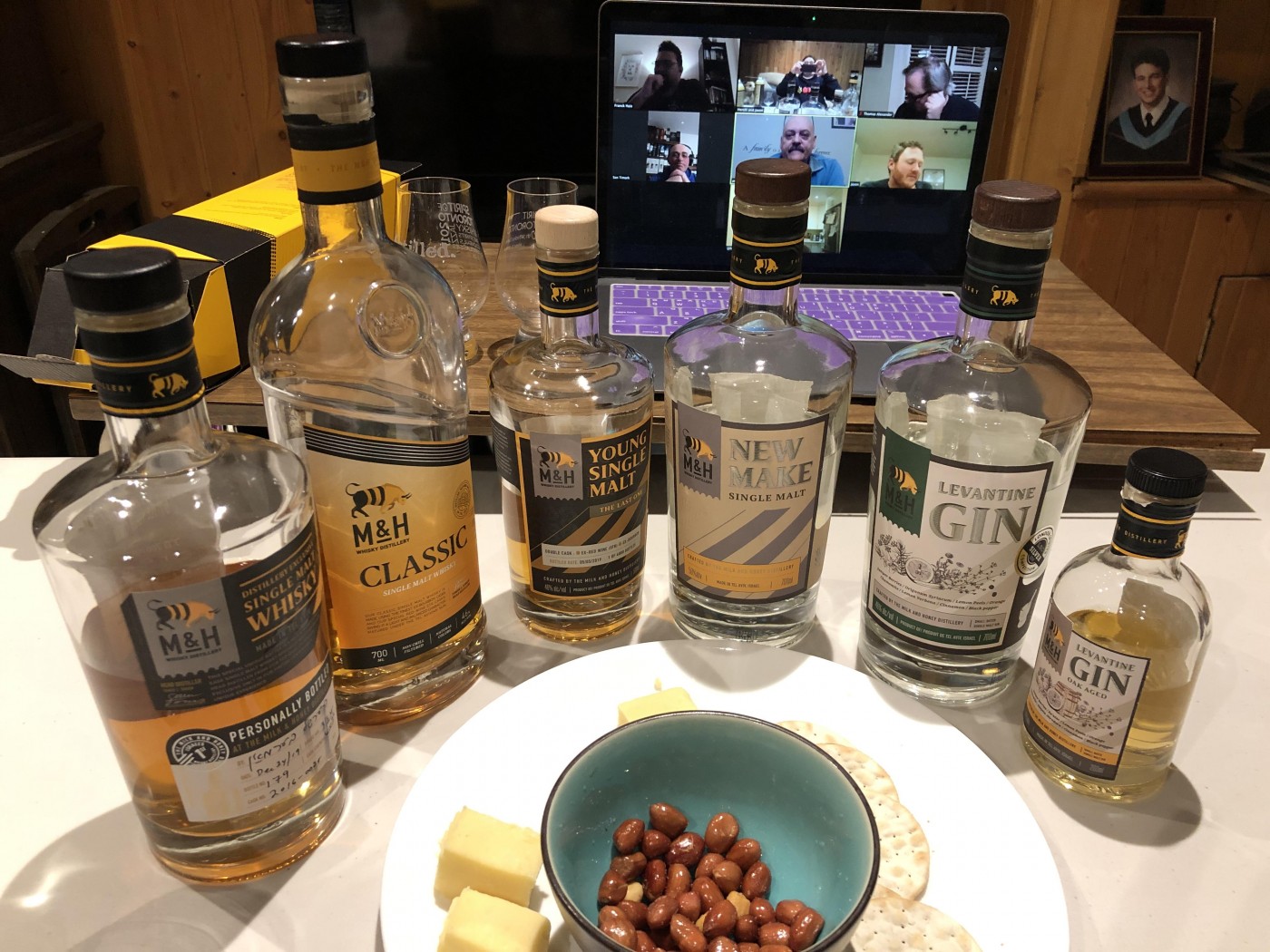 @Nozinan, a great tasting session indeed! It was nice to have the band back together. Thank you @Nozinan for making this possible. Cheers!

Every couple of weeks I get a text: "anyone want to do an impromptu zoom session?"

More often than not, my answer is yes. So when @cricklewood suggested it last night, I was all for it. Also joining us were @paddockjudge and @fiddich1980.

And the fact that I got to taste all of these expressions while consuming less than 50 cc of spirit in total was also a good thing...

@Nozinan Nice diverse lineup. I noticed the same thing with the JW Green. I don't think it likes to hang around too long after opening. Which one is the 200th Anniversary blend. Is that the Celebratory Blend at 51% ABV?

@BlueNote that’s the one. Yes

Passover is officially over!

This evening my daughter did the ceremonial unsealing of my cabinet and to celebrate I hosted an impromptu video tasting.

We all had different line-ups but here was mine:

Thanks guys for helping me end the dry spell...

@Nozinan I haven't met anyone who doesn't rave about the Caol Ila unpeated 15 and 17. I've got the 17 on my list for next time KWM or Craft Cellars has a decent sale. It's expensive, but I'm trying to stick to my buy less, buy better policy.

@BlueNote I have not yet tried the 15YO unpeated CS CI. I have three different batches that I got at different times. I’ve never. Paid full price for any of them.

The first was on sale in Calgary for $100 at a Liquor Depot in 2017. The other 2 I got in 2019. One was on a trade in of unwanted bottles I received as a gift for turning 50, and the other was on sale at Zyn. Once I’ve cleared some space in my cabinet, one of those will be my ling shortlist of things to open.

Tonight a small few of us got together to share a dram and some discussion over zoom.

Initially it was just me and @cricklewood so we got through a tasting that we had talked about doing probably a about 2 years now. We had exchanged some samples of different releases of Bruichladdich. Specifically, 2 of the Classic Laddie (18/427 and 16/004), as well as the first (46%) and second (50%) editions of the 10 year old.

All solid whiskies, I preferred the 18/427 of the classic laddies, and found the two 10 year olds to be very different, but both tasty. All four are on my (long) to review list.

As the conversation took some twists and turns, I poured 5 cc of Lemon Hart 151 run to finish things off. And it was a nice finish.