@Victor Actually it was the Don Julio that I thought was the 1942. I did end up getting the right one eventually. I'll do a more thorough search next year for the Jose Cuervo. Thanks for the info.

@BlueNote yes, 1942 was the year of the founding of the Don Julio distillery, and they memorialized it by naming a product after the founding. Don Julio 1942 is a 2 1/2 year old Anejo, which makes it almost an Extra-Anejo (3 year minimum). Don Julio 1942 is light in style and not woody. By contrast Jose Cuervo Reserva de la Familia Extra-Anejo is one of the woodiest tequilas you will encounter. @bwmccoy, upon tasting it said, "This tastes like whisky!" which to him is a compliment.

I am a fan of both Don Julio 1942 (really I like all of Don Julio's products) and Cuervo Reserva de la Familia Extra-Anejo. They both tend to be expensive bottles.

11 months ago 3Who liked this?

@Victor Many thanks. As has been said before, your encyclopedic knowledge and generosity is a much valued asset to this site.

@BlueNote - my tasting with @Victor last September was my first exposure to Tequila and Mezcal, other than in mixed drinks, but that doesn’t count. Of course, now I will forever be spoiled having started off with the best of the best. :-)

I really enjoyed the Don Julio 1942 a lot. I would happily own a bottle / drink that one any time. However, I was so blown away by the Jose Cuervo Reserva de la Familia Extra-Anejo that the 1942 got over shadowed, but not due to any lack of quality; just personal preference.

@Victor was very generous and sent me home with a sample of the Jose Cuervo Reserva de la Familia Extra-Anejo. After spending some more time with it, I would clarify my comment to @Victor that “this tastes like whisky” to more accurately state that “the extra time in the cask gave it some very nice whisky-like qualities”. Either way, it is a special spirit and I really appreciate @Victor’s guidance and education in all things Tequila and Mezcal. Couldn’t ask for a better teacher!

@bwmccoy I absolutely agree:@victor is an amazing resource. I’m seriously on the hunt for the Jose Cuervo now.

Bought a bottle of Loch Lomond 12 for my brother's birthday, it landed recently at the SAQ and I know the re-vamped line-up has garnered a lot of praise. I was able to try it that night as well, it's definitely interesting, at times it's a bit spritely & reminded me a bit of Edradour 10 or some Benriness IB's I have tried. At the price it retails for in UK/EU I can see why it's gaining a following, here the price of 69$ puts it in competition with a lot of other solid values.

@BlueNote If I can chime in on the Cuervo Reserva, I was able to try it at the tasting bar at the LCBO and it's all that's been discussed and more, the Cuervo had a great mouthfeel and lasting finish which I find other aged Tequila's are often lacking, please note I am by no means a Tequila or Mezcal expert but felt that this was notable.

@cricklewood Thanks, good to have another positive opinion and recommendation.

Amrut Peated Cask Strength....it was either that or Balvenie 15 Single Sherry Cask. I bought into all the superlatives on Connosr and am glad I did. After an Irish Wishky seminar, I opened it up on the spot for a bunch of friends and everyone loved it as well. I've tasted the Balvenie already and will probably buy it at a future date. It's also really great; along with the Port, it's probably the best Balvenie I have had.

11 months ago 6Who liked this?

@KRB80 Don't forget the Ashok Manoeuvre. Covering with one hand and warming with the other for 10 minutes will take it to heights you could never dream of...

@KRB80, you busted out the CS peater after an Irish whiskey seminar?

Sounds like popping in a Metallica album on your way home from the symphony!

@MadSingleMalt More like after a folk gathering, no? Although, they ended with Redbreast 12CS and, as a twist of luck would have it, some Monkey 47 gin which was amazing. Surely fit to my eclectic tastes in music!

I'm eager to see how this Amrut develops with a bit of air, not to mention with proper attention applied.

Why would I do this when I could have purchased another bottle of Ardbeg Uigeadail for the exact same price? Good question. I wonder myself.

I feel confident that I won’t enjoy this bottle as much as an Ardbeg or Laphroaig 10yo CS. Valknut is 46.8% ABV and has no age statement.

However, I was curious when Highland Park came out with their Valkyrie calling it more peated than the typical HP12. They use some of the own malted barley peated to 20ppm mixed with unmalted barley from the mainland. The typical HP ends up around 4-6ppm according to their literature. The Vulknut supposedly has the highest proportion of their Tartan barley malted to 20ppm. I am curious to see if I notice much difference in peat or barley with their standard line.

Part of the issue is that Highland Park holds a special (if tarnished) place in my heart. It was my gateway drug to peat back in 2004. The HP12 was a regular in my cabinet for a few years. Then when they dropped the old round bottle and moved to the flat style in 2006 I caught two really bad bottles in a row. It put me off PH12 for over a decade. Just this past year with the new stylized design I decided to give it another go. And it was good again . . . maybe not brilliant, but very good. Maybe Highland Park has turned a corner with me?

Further, I am hoping to learn to read some different whisky reviewers:

11 months ago 5Who liked this?

A friend brought me an Old Forester Rye, 100 proof from. 1 Liter bottle for $40 Canadian, all in. An amazing Rye for the money. Would grab a couple more of these if given the chance.

11 months ago 7Who liked this? 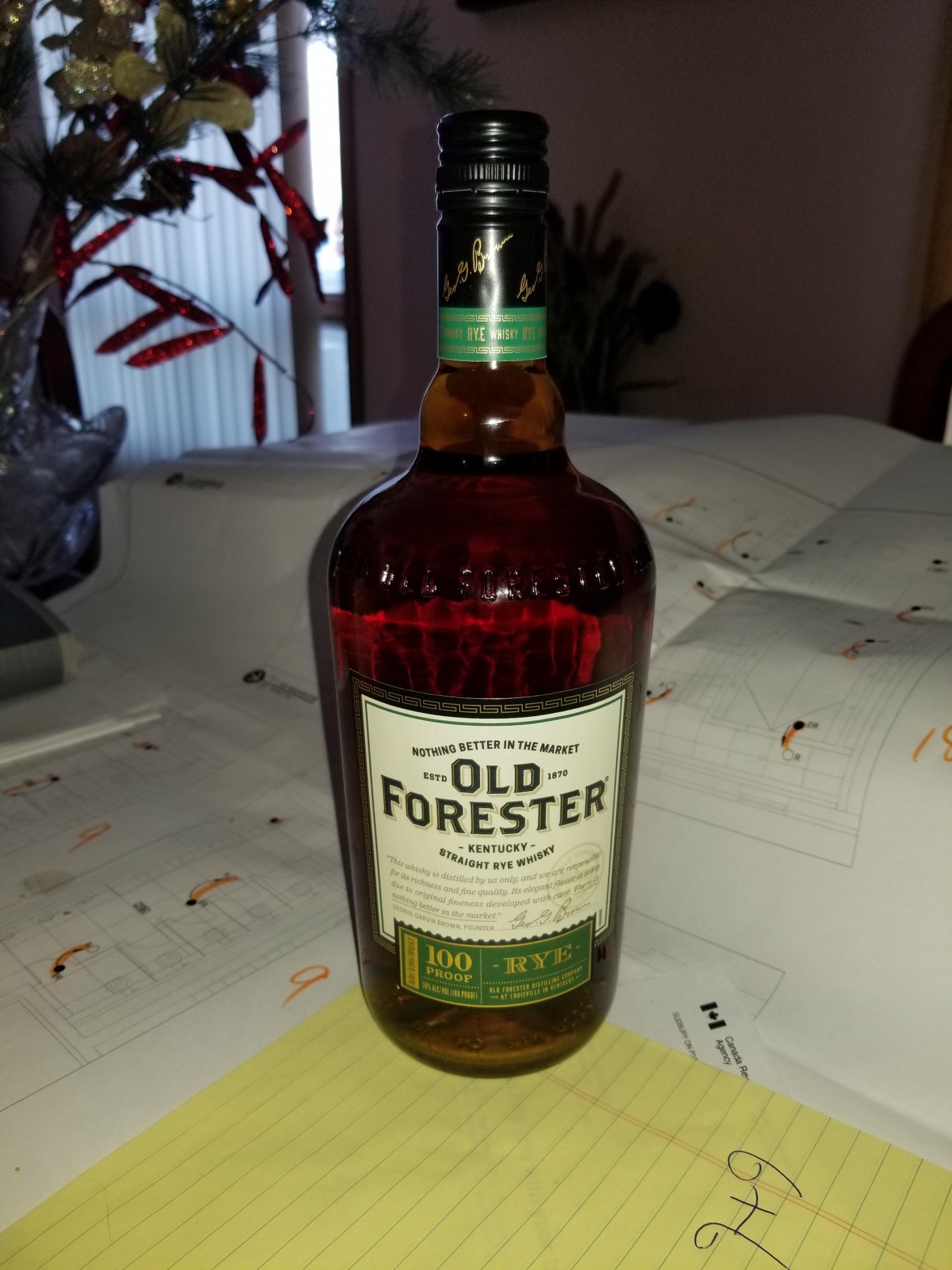 @Astroke it is good to hear an endorsement from you. I haven't tasted Old Forester Rye and would like to. 50% ABV is a righteous number. Sufficient to sink one's teeth into.

@Victor I have taken it down to the shoulder and will wait a month or so, very good for the age but does have a little acetone burn that should settle down. Would like to try it side by side with WT 101 Rye but sadly that is only a rumor in Canada.

11 months ago 3Who liked this?

Just picked up this Arran 16 special edition to match my 18 special edition. Now just to find the 17 and complete the trio and try them all side by side.

11 months ago 9Who liked this? 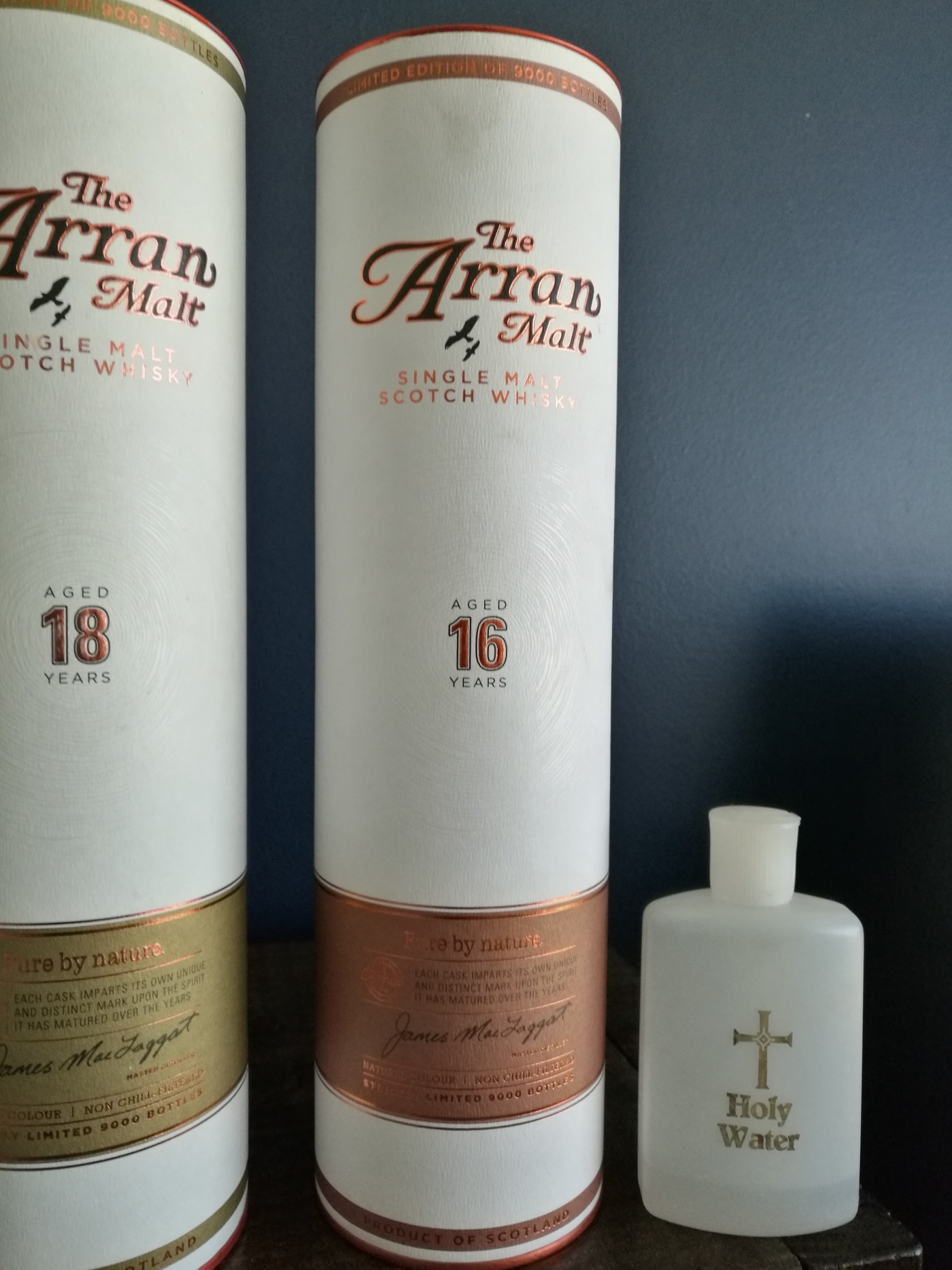 @Astroke nice catch on the OF Rye, I have been looking forward to that release, I like how they brought it out at this ABV as well. It's been getting good reviews, I wonder if we will see any in the available hunting grounds.

@casualtorture those Arran limited editions are a great catch, have you tried any of them before?

@cricklewood I have not. I'm trying to wait and get all 3 before I open them.

@casualtorture Nice I thought perhaps you might have tried one prior to this. I know the make-up of the 18 in this series is slightly different than the one they eventually released to mass market. I think the edition you have is all sherry casks.

@casualtorture They look interesting, but I'm sure anything diluted with Holy Water will taste divine. Is that to return the share that the angels took?

@Hewie My brother brought that back from Rome, figured it could gaurd my whisky.

This could also fall under the How Fucked up is the LCBO, these showed up with 6 available online, 6 at Summerhill and 4 at Cooper St. That's it, no more. 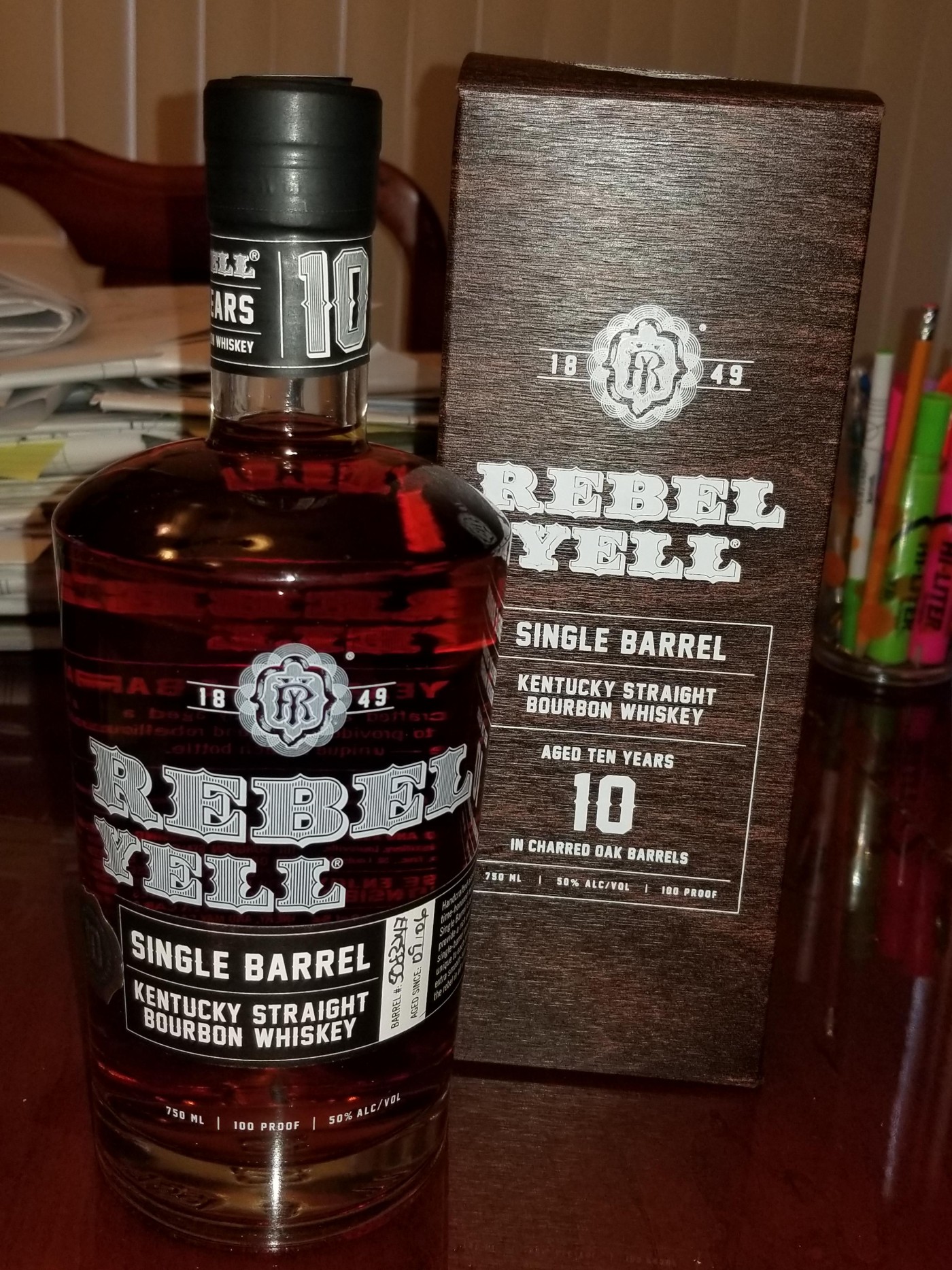 I just picked my order from the SAQ 3 bottles of Jack Daniels Single Barrel, Barrel Proof (that's a mouthful), there were 3 casks purchased by the SAQ (yielding less than 150 bottles each) and they sold out within a week. 2 of the bottles are destined for Connosrs in Fordlandia, I wonder if the LCBO will release any of this down the line.

I also picked up a Balblair 91, 2018 release on the recommendation of @Astroke and @fiddich1980, 230$ is a good price for a 27 yr old whisky in the current climate but a bit more than I normally spend. Thankfully I had 130$ in SAQ points I was saving for a rainy day (actually for a bottle of Lagavulin 12 but that's now sold out), with the current changes at Balblair its a good time to get this as well.

@cricklewood A friend brought in 3 bottles of the JD SiB BP and offered 1 to me but I already had 1/2 bottle and was not as big a fan of these as most are. I thought the SAQ price of $80 was more than fair for these.

@Astroke yeah not everyone is a fan of the JD profile, I've really enjoyed the regular single barrels I've had lately and as you mention 80$ is fair in comparison with other barrel proof whisky like Stagg and Bookers (which sell for 85-100$ now).

I wish I could get my hands on one of those JD heritage barrels but my US connections are ka-put for now. It's ok its probably saving me from buying too much I suppose.

Yeah the price on that Balblair is quite a steal and I've enjoyed some of their other releases a 99 and 00 that we're quite good. There's a 20yr single barrel (cask strength) at the SAQ but I don't know much about it.

@cricklewood I've had very little exposure to the JD SBBP, but I remember @TAlexander opening one at my place about a year ago, and being blown away by it. Flavours I had not previously tasted together in a single spirit. Cherry that I LIKED. That's one of my many samples I still have to get to to review...

@cricklewood That Balblair 1997 (20 year CS) is a Bourbon cask only. I was given a heel and it is a tropical fruit bomb, very nice but a little hot.

I just got a bottle of Kilchoman Single Cask from a Private Bottling. A friend who spends a lot of time in the UK for his business picked up a few of these for some members of a private Facebook page. It’s an 11 Year ex-bourbon Cask, bottled at 55.9% abv, and the tasting notes read “nom, nom, nom”. 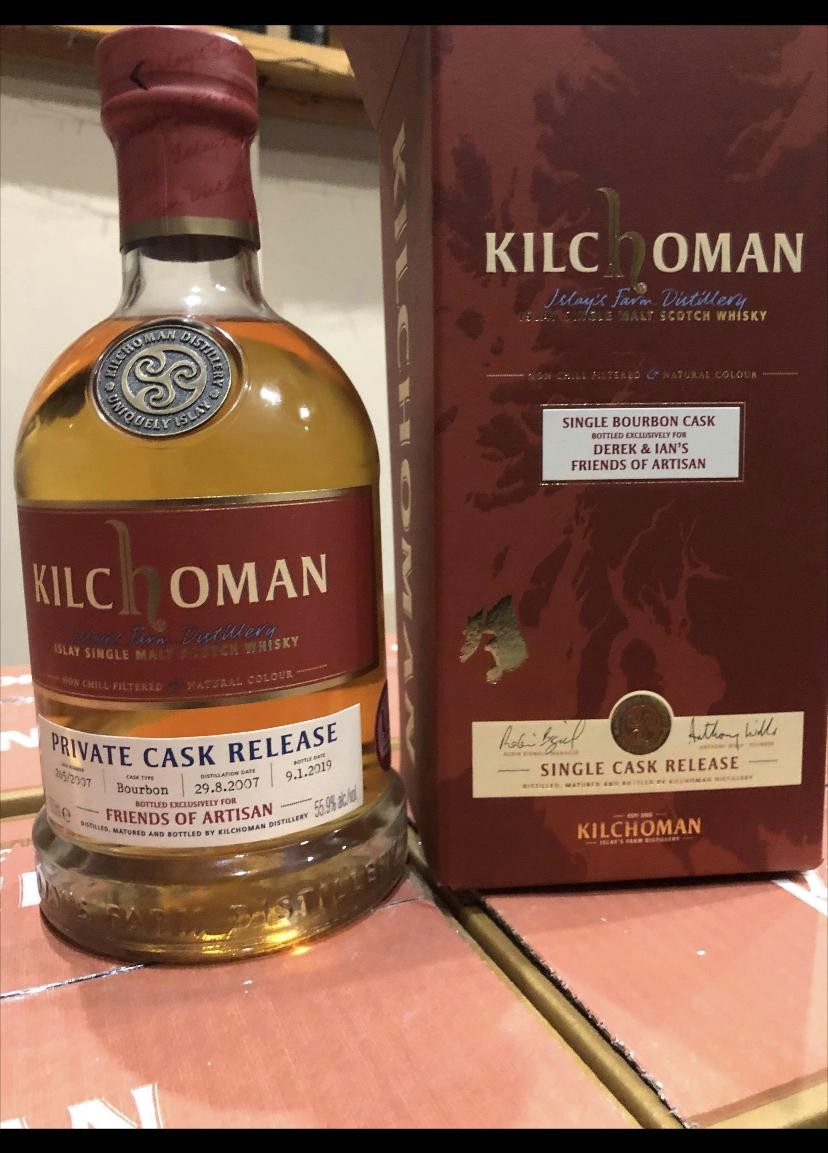 Excellent choice. A lot of those can be excellent. 11 years old Kilchoman? It seems like only yesterday on Connosr when the oldest thing Kilchoman sold was 3 or 4 years old. Tempus fugit.