Happy Father's Day! I'll be cracking open the Bunna soon as I polish off the last of my Laph 10 CS. 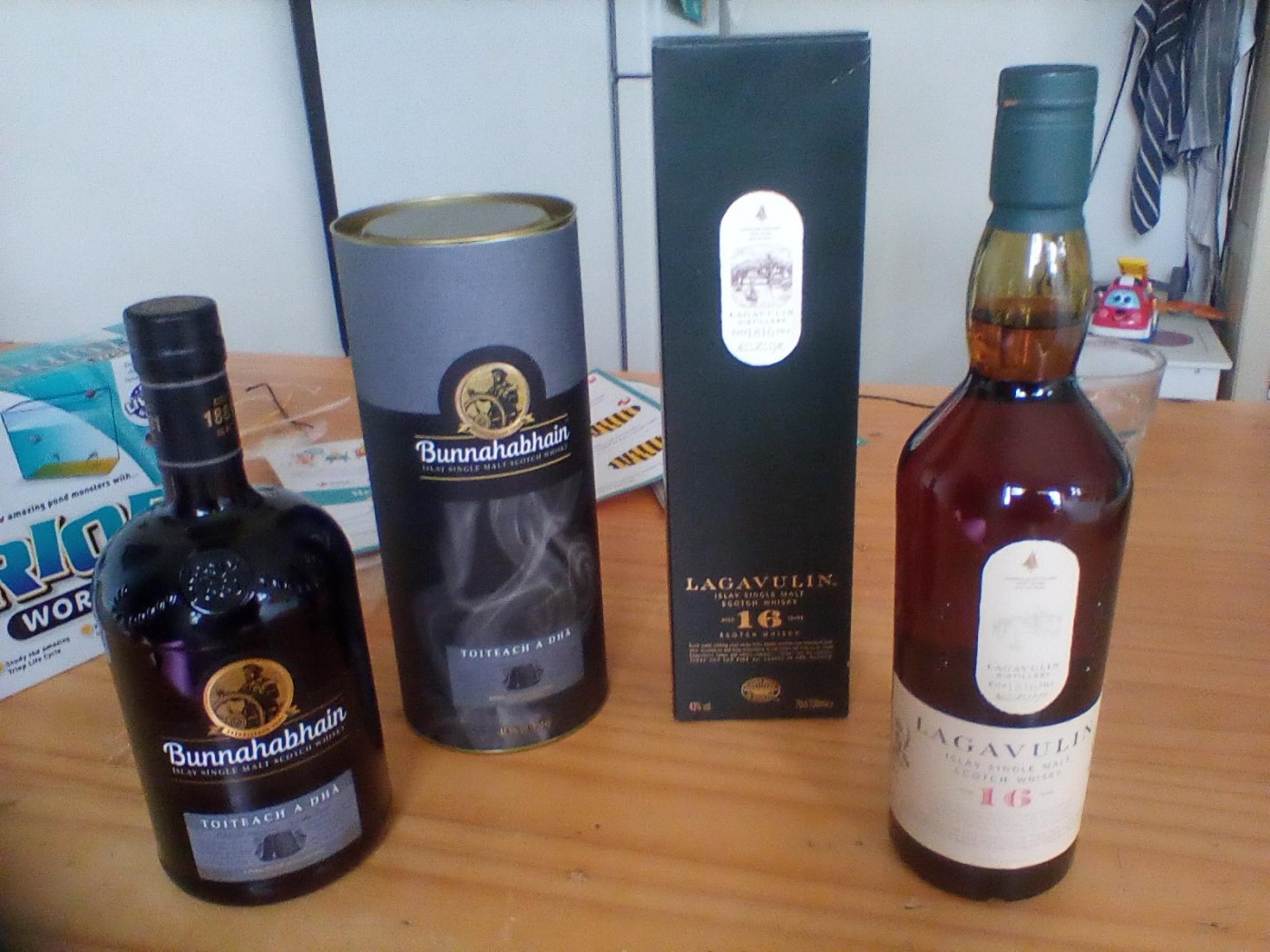 @Hewie Nice find. Doing a quick conversion looks like you got a good deal even without the discount, especially considering how much it might cost here in Canada IF you could find it.

Enjoy it in good health!

I purchased the following bottles for the bar at the cottage:

@talexander I agree, the Dolin is better than Martini Rosso but not as good as Antica although it depends on the cocktail. There are those that I do not like Antica in and prefer the Dolin or Punt E Mes.

@talexander Well-a-tee, well-a-tee, well-a-tee. Looks like you convinced me. I had to go into work today and I was curious so I stopped into the LCBO on Bayfield Street in Barrie and got a Dolin Sweet and a Dolin Dry vermouth. I’ll keep those at home and bring the Martini Rosso up to the cottage. I hope you’re happy.

Well, I decided to splash out a few dollars, so I went to a local warehouse liquor store, which isn't too far from the house. Anyway, I was planning to buy one bottle because that is all I thought they had. When I got there, they had two, so yes, I bought both.

Why? Because I succomed to the 'online rumors' (maybe they are or maybe they aren't true) that this particular whisky had been discontinued.

Now I must admit, I am pretty much over being influenced by the folk dong reviews on Youtube. With a few exceptions. And this purchase I do give credit to Whisky Whistle, Mark, up in the Great White North (Yes, a SCTV reference). I had also watched a couple of other reviews and thought it sounded like a whisky I would want to have. So, I will say this also fall under the category of 'buy before I try.' At this time wearing masks and caring around wipes everywhere I go, I guess I need to take a risk on something. So I do.

I do hope I am not repeating a post. haha. I did try to go back to make sure I wasn't. 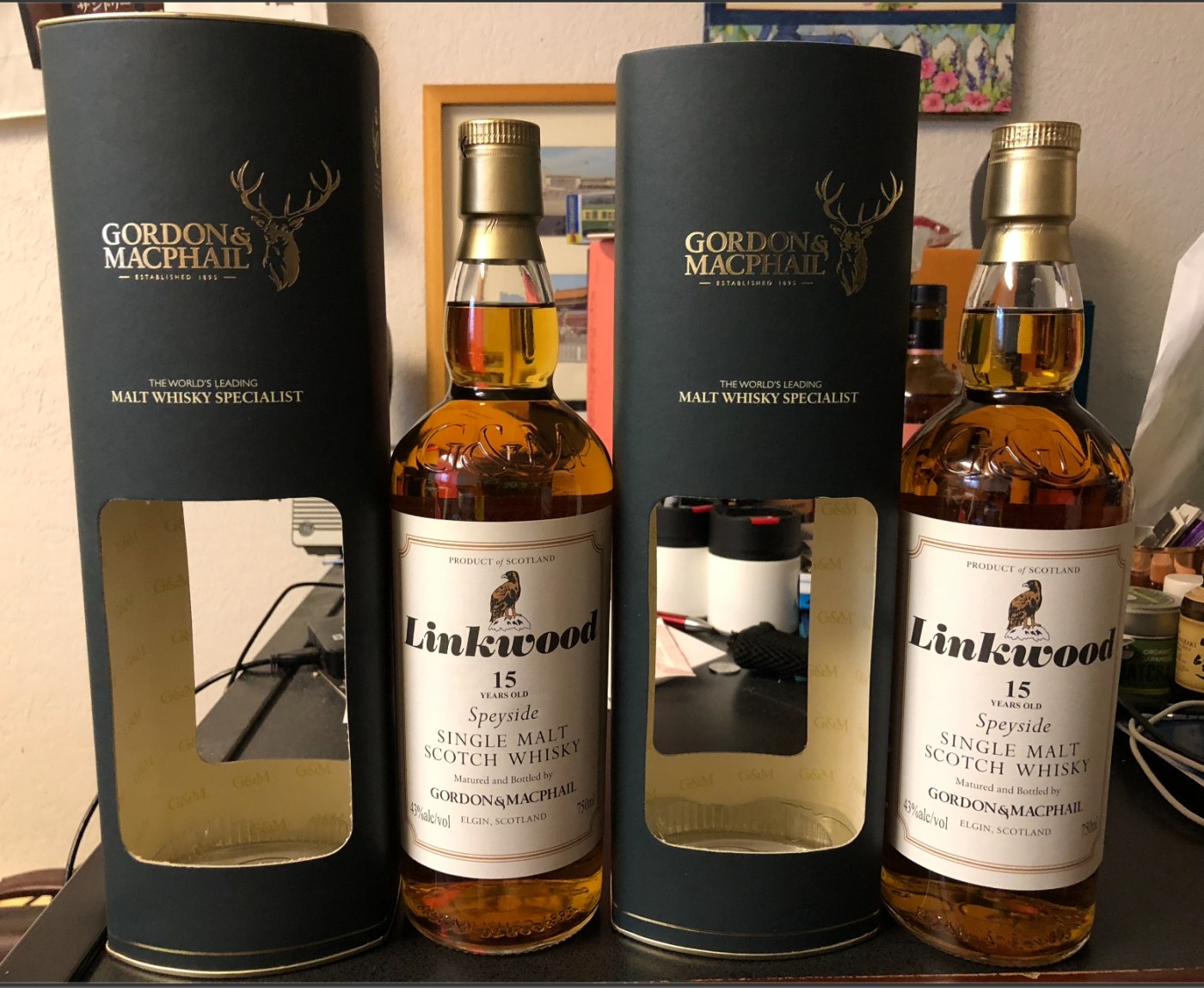 @ajjarrett - in my humble opinion, you WILL NOT be disappointed in getting this and even more so, two bottles. I wish I had another one or two.

This is good to know. Once I open them, which might be some time from now, I will report on my impressions. I still haven't opened one of my bottles of the 15yo Glencadam. I did, however, open one of my bottles of the 21yo Glengoyne. Truly delicious, and I do not mind at all it is 'only' a mere 43% ABV. Luckily, I am not too much of an ABV snob, as I was once was. haha.

@ajjarrett - I drink mostly single cask, cask strength whisky and I did not notice the 43% ABV on the Linkwood 15. It drinks above its ABV!

@ajjarrett What @bwmccoy said. It drinks way better than its ABV would suggest. You can't go wrong.

I am sorry, I better clarify, my 43% ABV comment in my earlier post was referring to the Glengoyne 21yo.

I tried to focus on specific characterstics for whisky, but I found two major drawbacks:

I am glad I got out of the Ralfy whisk(e)y mantra. Don't get me wrong, I do have preferences when I look for whisk(e)y, but I learned not to let that prevent me from trying and buying whiskies that don't meet the criteria.

I remember back in the day 43% abv was the baseline to hope for from the distilleries, now it seems to be the trend for people (Youtube reviewers) want to advocate 46%. haha. Of course I have to remind myself the old expression, "Opinions are like assh*les, everyone has one." In the end, buy and drink what you enjoy.

@ajjarrett Ralfy, a legend in his own mind. I've never tried Aberfeldy 12, but after watching Ralfy heap scorn on it for 10 minutes, I just have to try it.

By the way @ajjarrett, I'm sipping on the G & M Linkwood 15 right now. I just needed to confirm that it is an outstanding dram, notwithstanding the 43% ABV. I doubt it would be any better at 46% or 56% ABV. I look forward to your impressions once you crack it.

Well, I hope you didn't have to confirm it just to put a post on the forum. As if any of us needed an excuse to have a dram? Hmmm. Not.

@ajjarrett Haha, quite right. I just wanted to refresh my own memory. The conclusion: I need to get another one.

@BlueNote Then I hope it hasn't been discontinued, or if it has, that you find it available at an uninflated price.

I just got the Ledaig to keep its sibling from Mull company. Both very good, especially the Ledaig. 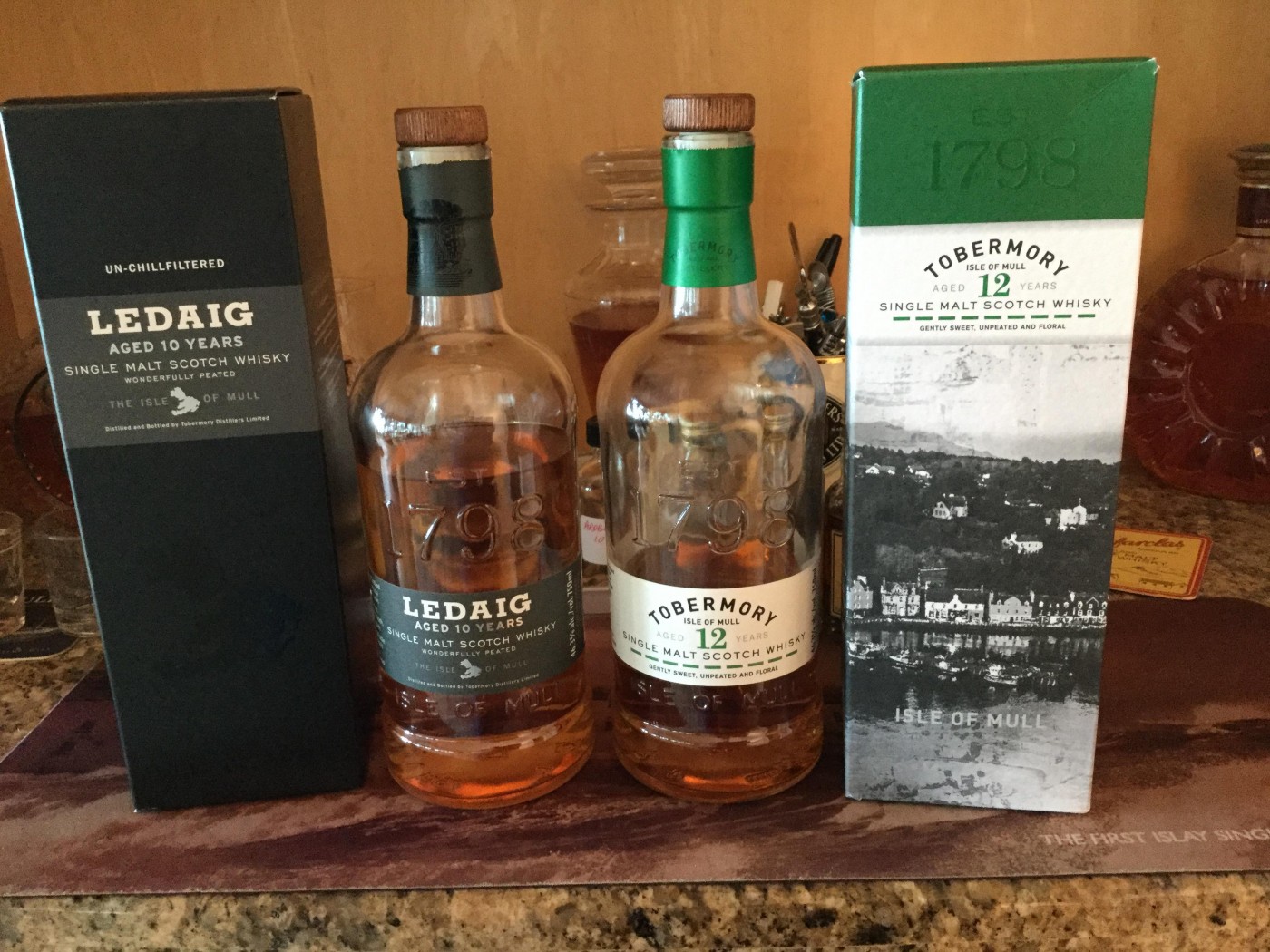 @BlueNote A perfect reason, no one, not even a bottle should drink along.

This little is pack. Why? I'm yet to try Bowmore and have had a bottle of the 12 in the stash for a while but I never seen to get round to opening it. This way I can try the range (albeit the older version of the 15) and keep the full bottle to gift or trade, if I'm not so keen, or open it knowing I'll enjoy it. Not bad for £15 really. 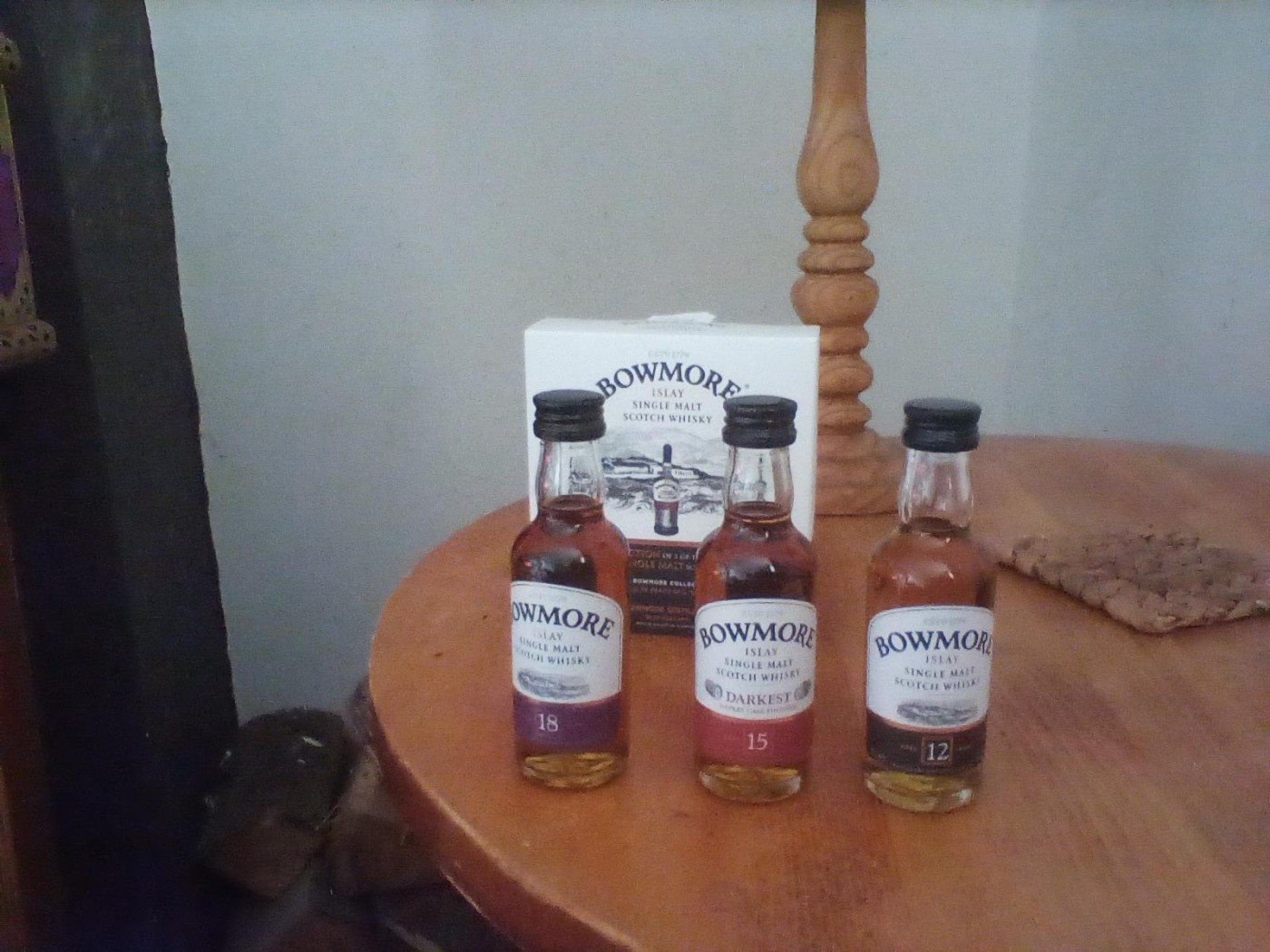 @RianC It's always good to try before you buy. I bought a similar little set to orient myself to Bowmore before trying the original Laimrig which was waiting for me in Calgary.

It almost backfired though. I disliked the three so much, good thing I didn't trade the Laimrig...

Ardbeg 5 (for the bunker), an Uigeadail of a batch I like, and a Longrow, which I guess NAS, I was so thrilled to see any Longrow again that I picked it up. I was also in a hurry, wearing a mask, and not wanting to obstruct other shoppers.

They had some new Springbanks and a Killeran. I love the Springbank 12 CS but haven't tried the 10. I like the Kilkerran 8 CS, but I'm thinking of going back to get a bottle of the 12 while it's still around. Maybe Friday.

@Jonathan, you like the Kilkerran 8 CS? I gather you like some punch and some edge to your drams. In that case, I would easily recommend the Springbank 10 over the Kilkerran 12. They're broadly similar, but the Springer has much more of a fun edge to it.

I like all the Kilkerrans I've had (many), but the 12 is easily the most mild-mannered of the bunch. It's fine, but it's not what I'm looking for in a Kilkerran or Springbank.

I bought another Talisker 10, because it continues to be the best $37 you can spend on whisky.

7 days ago 3Who liked this?

Picked up a bottle of Sagamore Calvados Finish Rye, Starward Nova single malt and a couple of bottles of Hibiki Harmony.

@MadSingleMalt I was also underwhelmed with the Kilkerran 12. It would not add anything to my cabinet. Luckily I tried a sample so I did not buy a whole bottle that would have languished in my cabinet for years.

I don't doubt that Talisker 10 is a great buy for $37, but I would suggest that OGD 114 might be had a little cheaper and also packs a lot of flavour.

I've been looking at other brown spirit. The urge to explore got the better of me. After scanning our spirit monopoly I located older releases of these which were actually decently priced. A rum which is the competitor to Foursquare and a Single Barrel 2006 vintage 10 year old "terrior" Cognac. 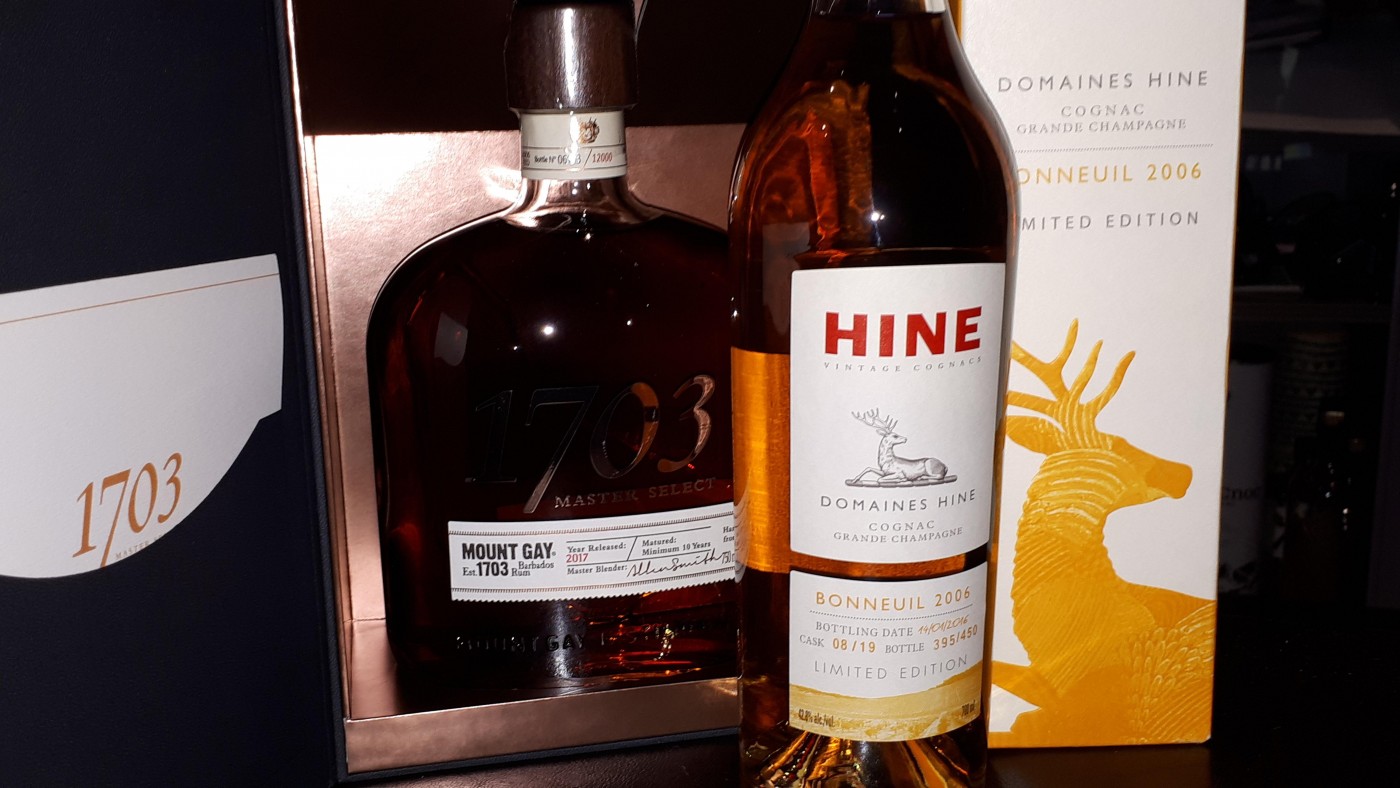 I just bought a bottle of Maker’s Mark and Havana Club 7 Year Old Cuban rum, both for the cottage. I had a hard time adding Maker’s to my cabinet...maybe the website is a bit glitchy??

@OdysseusUnbound - Nice! Let us know how the rum is

I think the site has been a bit temperamental for a little while. I picked up a Clynelish 14 (for £35!) and it wouldn't find the bottle on the drop down menu. Same thing happened when I did some reviews recently.

And, by the way, that's not a site critique (ha!) more just looking for confirmation I wasn't a total tech 'tard!

@RianC I’ve had the Havana Club 7 before. It’s inexpensive and quite easy to sip. It’s not as bold or funky as some other rums, but there’s some molasses, vanilla, brown sugar, a touch of smoke, and a little banana.