Nothing wrong with using a crystal sherry glass to drink a sherried whisky. What do you think of this craze to finish whisky in wine, sherry, champagne and rum casks? I love Pedro Ximinez finishes, GlenDronachs are awesome. 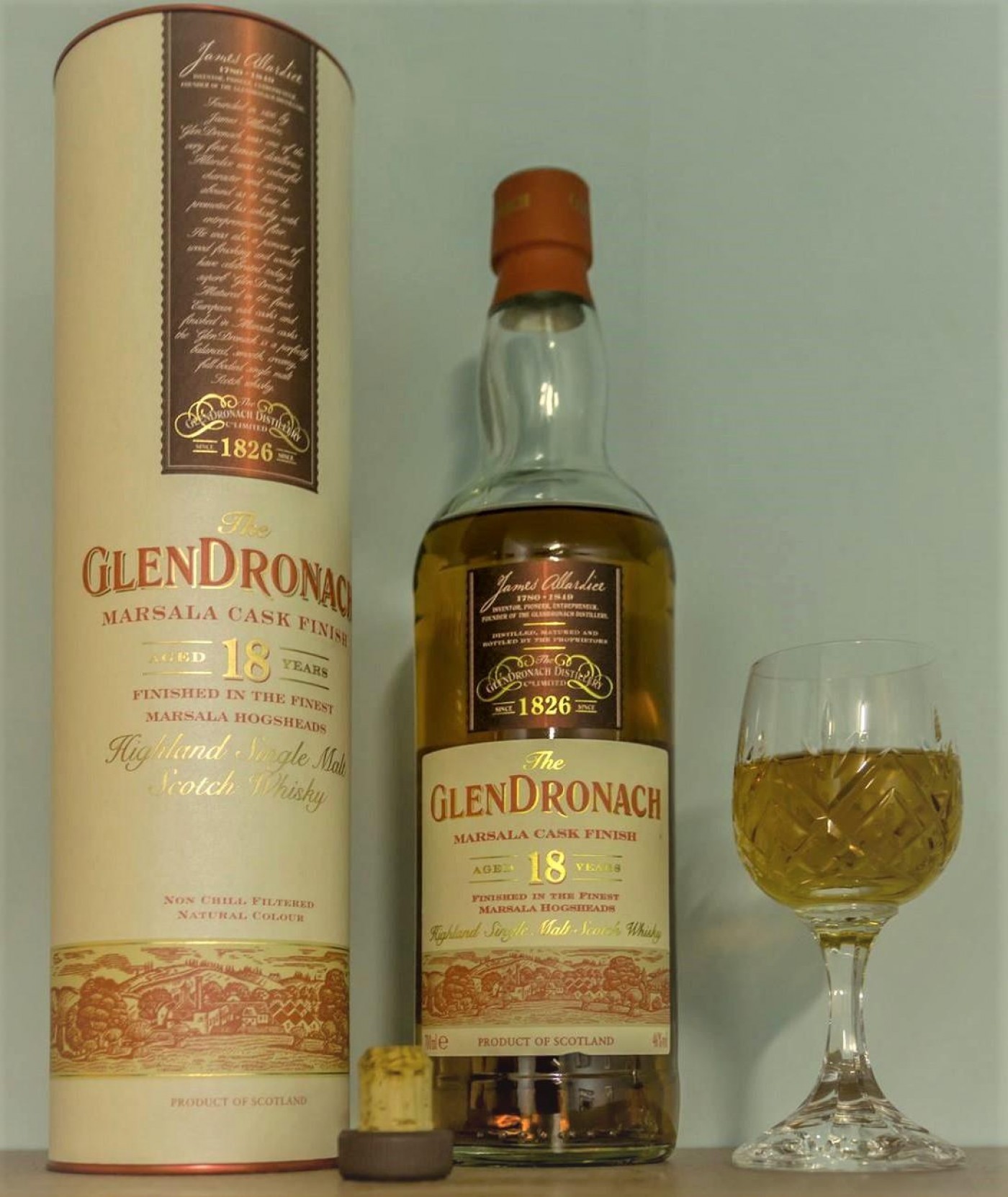 I think it goes without saying that casks from fortified or sweet wines work very well - that includes Sherry, Port, Madeira, Marsala & Sauternes (putting sulphur issues around Sherry aside).

Arran Grand Cru Champagne Cask Finish Single Cask was released in 2005. Probably the start of the craze for Champagne finishes.

Champagne finished Scotch Whisky sounds like an idea that was dreamt up in the marketing offices of LVMH, not in the warehouses of Scottish distillery.

My experiences with Springbank Claret Wood finish and Longrow Burgundy Wood has been more than positive.

3 years ago 6Who liked this?

Arran Amarone Cask finish was nice, if a little pink. Not sure you can get it any more though.

Nice topic! What matters to me most is: was it intended to be a wine finish or is it a coverup of a lesser whisky cask they have in stock? Pimp it up with some fancy finish and sell it! Glenmorangie for sure intends this. They are the pioneers in this area. Quinta Ruban, Nectar d'Or, private cask range. All good stuff!

@jeanluc I tend to agree that a touch of added sweetness is a boon. But for me, a few NON-fortified wine influences have stood out: Octomore 7.2, Glenmorangie's Artein, and especially Kavalan Solist Vinho Barrique. In the more budget-category, Glen Moray 10 Chardonnay was a surprise success.

I agree with @DutchGaelisch, if it's a well thought out finish or aging that betters the whisky I like it. It makes for some extra personality.

However if it's just to mask an inferior product it's bull.

I tried a 20 month ex red wine cask malt spirit from The Cotswolds Distillery recently and found it be quite nice! Apparently they'll be using it in their first proper whisky release later this year so I can look forward to that!

Had a taste of Glenfiddich Age of Discovery Red Wine finish at the weekend and was pleasantly surprised.

One of the worst bottle Ii had was with wine finish. When the whisky becomes sour and acid, you know you are over the top, but with the right dosage, it can bring fruits and opened the spirit. Sometime, it also gives life to the wood notes. I usually find that it works better with a sweet whisky.

This is a three year old thread:

Today we see more distilleries using wine barrels of various types being used to finish, mature, or blends, single malts. Deanston's 2008 Red Wine Bordeaux being fully matured in red wine cask. Glenmorangie using Sauternes barrels for finishing whiskies. Finally, Bruichladdich Black Art which is a blend of single malts from various wine barrels. This practise is pretty much the norm with most distilleries. Bourbon is no longer immune to this practise. What are your opinions regarding whisk(e)y and ageing in wine barrels? Recently, I passed a sample of Deanston Red Wine Bordeaux to a co-worker. He is a bottom to mid-shelf drinker, sticking to the standard entry malt, Glenfiddich 12, Dewars, and others. The feed back was pretty much a resolute dislike and repudiation such practises. I believe that much of what is considered good comes down to the talent of the master blender. Which wine incorporated whiskies and bourbons would you recommend or not recommend? I know that some would vouch for the Longrow Red. A few tasting note would be useful since, I have yet to try any. @Victor please refresh my memory on why you do not like wine finished Bourbon (if my memory is correct).

@fiddich1980 a good subject to revive.

I fear that we may be stuck with wine finishes for the foreseeable future regardless of what folks think of then. That is until they stop being the affordable alternative to sherry/fortified wine casks.

I'm not against the use of wine casks, I think it's the same with any type of cask, the quality of the wood and the previous content are important.

That said some of my thoughts...

-sulphur, tainted & spoiled casks...this overlaps with some of the issues in Sherry casks but the low abv & PH differences in non-fortified wines bring along their own set of issues and the fact that the industry is likely to sweep those under the rug like they have so conveniently with Sherry. (shout out to Maggie Campbell head distiller of Privateer who's one of the few who's been talking about this openly)

-STR wine casks, Jim Swan's secret weapon, I think this type of approach can lead to more nuanced wine influence and has had success with Kavalan, Kilchoman & others.

-Peat...some wine+peat combos can sometimes clash, the acidic or astringent elements clashing with the heavy peat. Kilchoman wine cask & some Longrow come to mind. Then I've seen it done with great success with Bruichlladich & Caol Ila (Gordon & Macphail) so what's the key?

-the heavyhand syndrome...in relation to the last point. I'd like to see more wine casks used as ingredients rather than the sauce. When blended in as part of a vatting I feel that the results are more nuanced (yes I can contradict myself by pointing to Deanston 2008).

I suppose with the recent shift by the SWA to allow alternative casks like Calvados and Tequila we'll go through similar discussions or issues.

@fiddich1980 - When it comes to using wine casks I suppose all that really matters is, did it work? I admit I'm generally suspicious of finishes as I suspect they are used most often in an attempt to improve sub par juice. It can work very well though, Quinta Ruben, Balvenie rum cask and Ledaig Amontillado being good e.g.s.

I wish more distilleries would, after their experiments, settle on a style that works (as above) and then stick to it. Those that have a new finish every other week set the warning light flashing. It's nice to drink distillate more often than not over the taste of fresh cask content juice but peat and sherry can be especially exquisite when it works.

I'd be interested to try bourbon in different casks but then it wouldn't be bourbon, would it?!

Man, I really want more of that Ledaig Amontillado now

@cricklewood I love the Kilchoman STR, and Highland Park's 16 year old Twisted Tattoo (ex Bourbon cask finished in Spanish Rioja casks 46% ABV) is one of the best things they have done recently IMHO. I've only had a sample so far, but I'll be buying a bottle.

@BlueNote I sadly haven't tried the Kilchoman STR I really wanted to do a H2H with the Kilchoman red wine cask to see the difference of the cask influence but I didn't end up buying it.

Curious about that Twisted Tattoo now, I haven't had any official HP in a while.

@MRick I forgot about the Benromach wine cask finishes, they we're pretty good, I preferred the Hermitage over the Sassicaia

I've had many of the Longrow Reds, and they range from solid to outstanding.

I think I may have posted this elsewhere, but we did a wine and whisky tasting a couple of years ago - whiskies side-by-side with wine from the type of cask they were finished in, and paired with appetizers designed to go with the wines. It was an interesting experiment to say the least. We weren't able to get out hands on any white wine finishes, though, so it was all red wine: Red Blend for the Gretzky Red Cask, Californian Cab-Sauv. for the Crown Royal Wine Barrel, Prince Edward County Pinot Noir for the Crimson Rye, Amarone for the Arran Amarone Cask, and PX Sherry for the BenRiach 12yr Sherry Matured. Finished the evening off with a bourbon barrel aged red blend... 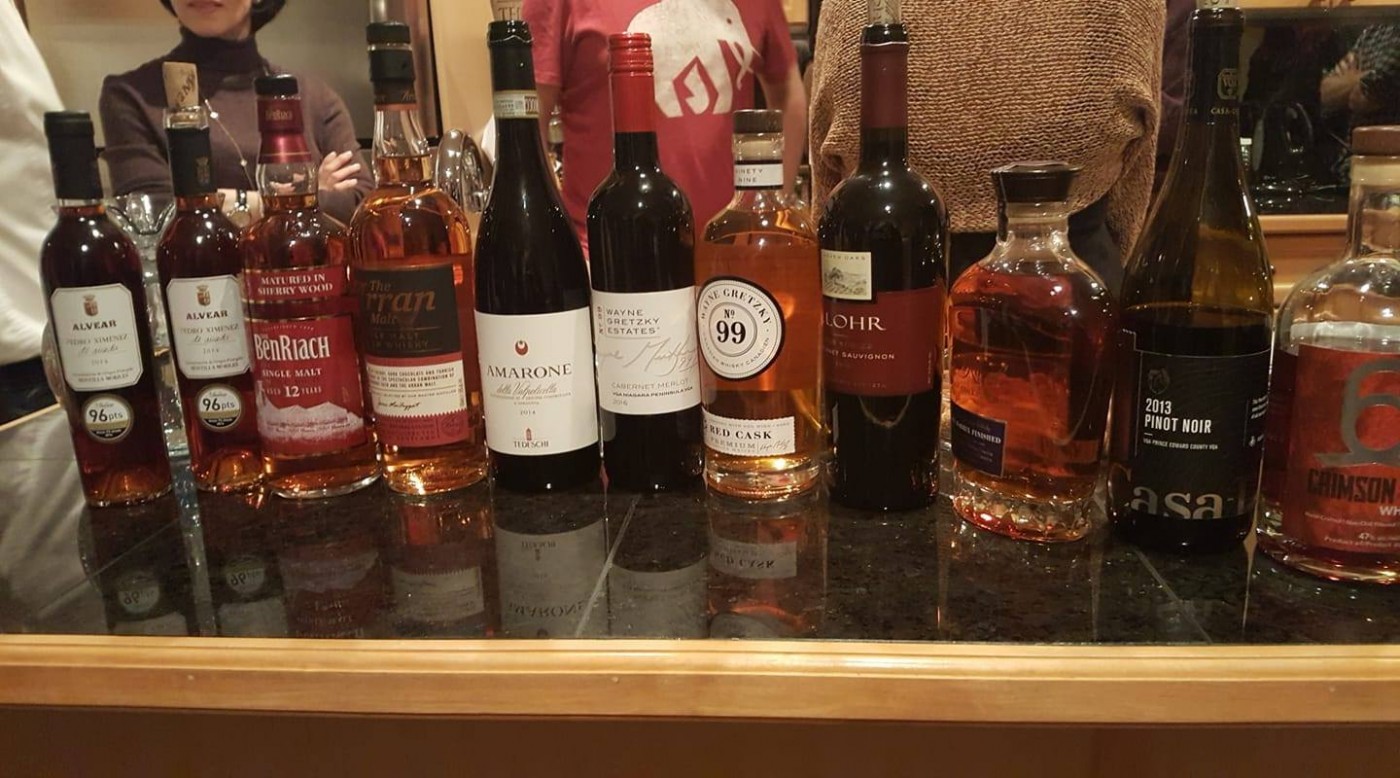 @YakLord, that’s a crazy-good tasting theme! A big challenge going back and forth, but a lot of fun for me. Thanks for sharing.

@paddockjudge Thanks! I had a lot of fun chasing down both the wines and the whiskies (one involved texting my wife, who was on a business trip to Montreal, and asking her to walk to the SAQ across the road from her hotel to grab a bottle of the Arran Amarone Cask), and preparing the menu for the evening.

@YakLord very cool tasting theme, what were your impressions from the that evening?

I had a sherry and whisky evening with @Robert99 and a few guests a couple of years ago. It was very enlightening to try the different sherry types and try and understand their influence on whisky.

I'd love to do that, but every time I drink whisky and red wine I end up with a banging headache.

@cricklewood I learned that as much as I love sherry matured whisky, PX sherry is way too sweet for my tastes...on the other hand, I like Port, but don't like Port finished whisky. The real surprise was the Gretzky Red Cask Whisky. It was a lot nicer than I was expecting, but I didn't really taste the wine influence. With the Crimson Rye, Crown Royal, and Arran, on the other hand, you could really see and taste the wine.

@BlueNote 1/2oz samples of each (except for the bourbon barrel aged wine at the end, which was a 1oz pour), so over the course of the evening it was 2.5oz of whisky and 3.5oz of wine.

@YakLord I could probably handle that.

@BlueNote An old fellah I used to work with when I was a lot younger told me when I had a banging hangover from mixing wine and beer 'never mix the grape and the grain'.

It's good advice. I don't always heed it.

@Wierdo Haha, yes, I’ve heard that one before, but apparently I’m a slow learner.

Got this email today. Anyone interested to try it? I'd be game! 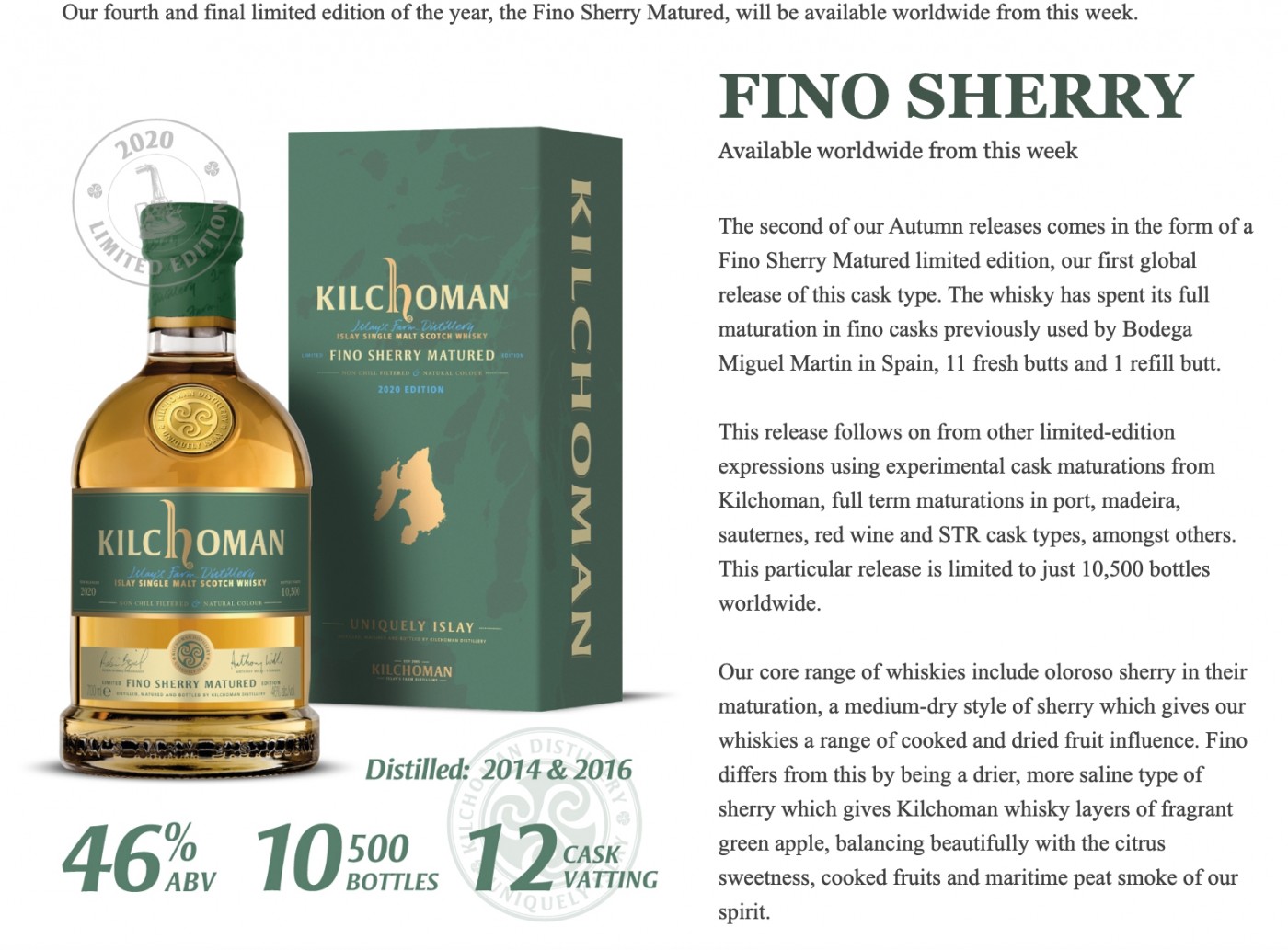 Sherry, Islay, what's not to like? You're stoking my FOMO. I'll pass because I need to stop trying to get one one of everything that looks good.

I'm so grateful to the small group of Connosr friends in and near Ontario who are generous with what they have and are willing to share with me. On the other hand, if it were not for them, I would have less or no FORO and FOMO and much more room in my basement.