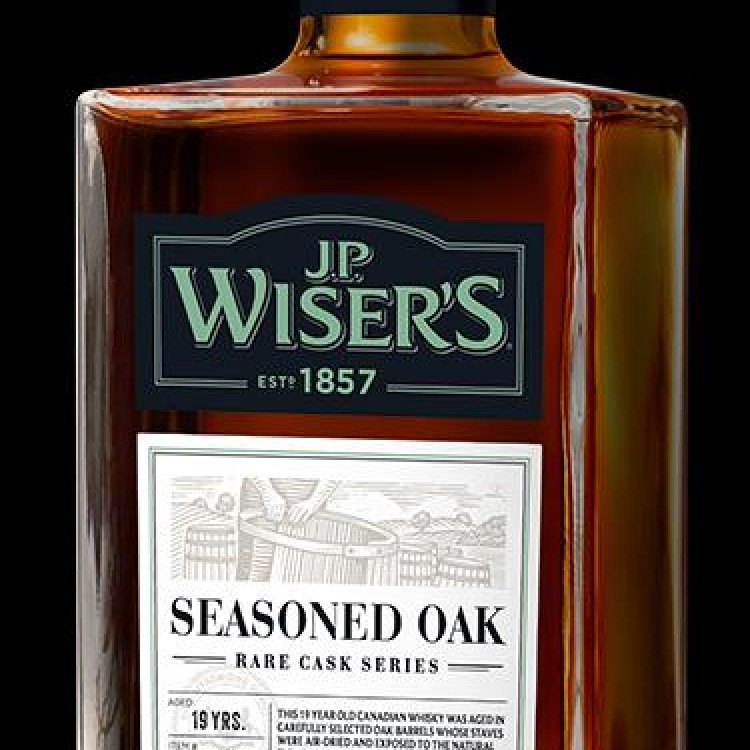 On May 5th I was at Spirit of Toronto with @Nozinan and @Paddockjudge, we attended the Wiser's Masterclass that was given by Dr. Don Livermore. We were presented with the 6 new expressions that would be released by the distillery in 2018.

Ok so this was one of two whiskys that we're an unexpected addition to our tasting, this is going to be an LCBO exclusive that will be released for father's day (much like Dissertation was last year).This is an 19 year old whisky that was aged in barrels made from staves that were traditionally air dried for 48 months. I seem to remember that there might be a proportion of European oak in there too and that these barrels we're toasted and not charred...I could be wrong.

Nose: Oak, vanilla, candied apples, a little allspice. It's in many ways a traditional Canadian whisky on the nose, it does have a touch of warm bread and fennel.

It's the first time I get actual maple syrup in a Canadian whisky, I know many people use that as a tasting note but I never quite get that complex sweetness and underlying minerality of maple syrup in most Canadian whiskys, this one though...round, warm and solidly crafted, the oak wasn't out of hand, I would like to try this in a blind line-up with other American and Canadian whiskys.

They are also displaying the actual age on the label (from what I can see on the Wiser's website) which is refreshing since most of the other rare cask series did not...perhaps this is to help in selling it at the price point they are looking for (70$ I believe)

END_OF_DOCUMENT_TOKEN_TO_BE_REPLACED

@cricklewood For me, Maple is a common note of Canadian whisky that I usually dislike but I come to realize that there is an higher quality of maple note than can be good. Of course that better, and more natural, maple note can only be found in higher quality whisky. I think that it is in Pike 10 yo that I encounter that better note for the first time. By the way you are describing that maple note, it seems you had the good one (the bad one can be quite chemical) which was to be expected from a product of this quality.

Doc L. Said in fact that the staves were from wood that was seasoned outdoors for 48 months, and suggested they were exposed to the elements. It may have been more than just air drying. Of course that was 19 years ago, and that would mean the wood was cut 23 years ago, so who really knows.

If you can get this (it's an Ontario only release) for $70, grab it! Because according to the marketing guy it will be $99 just like all the others...

Bottles at 48%, and compared to other genres of whisky, it's not a bad price for that age. Still, a bit higher than they usually sell for.

@Robert99 I just find it's an oft used descriptor for Canadian whisky it never quite hit me like during this tasting.

@Nozinan my bad, I meant to convey they were just stacked outside to dry and cure. Indeed they are at the mercy of the elements in this situation. Same tning with the price. I honestly thought this was in the 70$ range, at a 100$ its technically a good value for an 19 yr old whisky at 48%. I just don't get that much of a thrill from it. I'd rather buy two bottles of Legacy.

@cricklewood If you can FIND 2 bottles of Legacy...

Rumour has it that Legacy will make a return....with a slightly different name and "slightly" different price.

@Nozinan, Louder, you must make a fuss.

I started that rumor! LoudeR! LOUDER!!

The Toronto boys pestered Corby's until they began to listen to the noise Canadian whisky lovers were making about a cask strength Lot No 40.

I tried Wiser's 35 YO a couple of years before it was released. It was magnificent and would have languished in warehouses without discussion. Make some noise

BRING LEGACY BACK for $50

4 years ago 6Who liked this?

@Nozinan there was still a good amount in Orleans and Ottawa in January. I could only take one bottle, as I was in the middle of rescuing 3 bottles of Lot 40 CS...I wonder if they have any left.

@paddockjudge, a return of Legacy would be great, people would need to taste it in order to know what they are missing.

I would really like to organize a blind tasting to see how well Legacy, Dissertation and Lot 40 CS stand-up against some bourbons and American Rye.

@cricklewood No bottles of Lagacy are listed in Ontario. There have been sightings in Alberta.

The bottkes I saw in January were after they pulled them from the LCBO listing,. Im not sure why they removed the listing online but sime shops still have em.

Trudeau airport duty free has 1L bottles of Wiser's Legacy 65$ if I remember correctly. This was just a little over a month ago

Just an update... The seasoned wood was seasoned for 4 years. Total maturation 19 years, but only 1 year in the seasoned oak barrels.

@Nozinan Just coming back to re-fresh my memory on this review. The bottle label implies - as you wrote in your first comment - the whisky was matured the whole time (19yrs) in this "seasoned oak". However, upon checking canadianwhisky.org, the guru of Canadian whisky wrote - as per your 2nd comment - that it was aged 18yrs in regular used/tired oak and FINISHED 1 yr in this oak. I love Wisers and was about to buy a bottle today but IMO this is disingenuous, and same old, same old shit Canadian whisky industry BS!!! Think I'll spend my 100 bucks on a bottle of Glenfarclas 15yo instead....

@65glenfarclas The second comment was based on information I got directly from the doctor himself. I just checked my bottle and the situation is actually worse than you describe. The label says what you say, but the little add on that goes around the neck simply says aged 19 years, seasoned 48 months. That implies the whisky was seasoned for 48 months. What does that mean? someone sprinkled salt over it for 4 years?

I've only had it once in the last 3-4 months. I opened it in June hoping to get enough exposure to decide if I want to stock up, and to do a review. So I don't remember it too well.

I do like it. It's a high quality release inside the bottle regardless of what is on the outside. Whether it is worth $100 is a very individual decision. 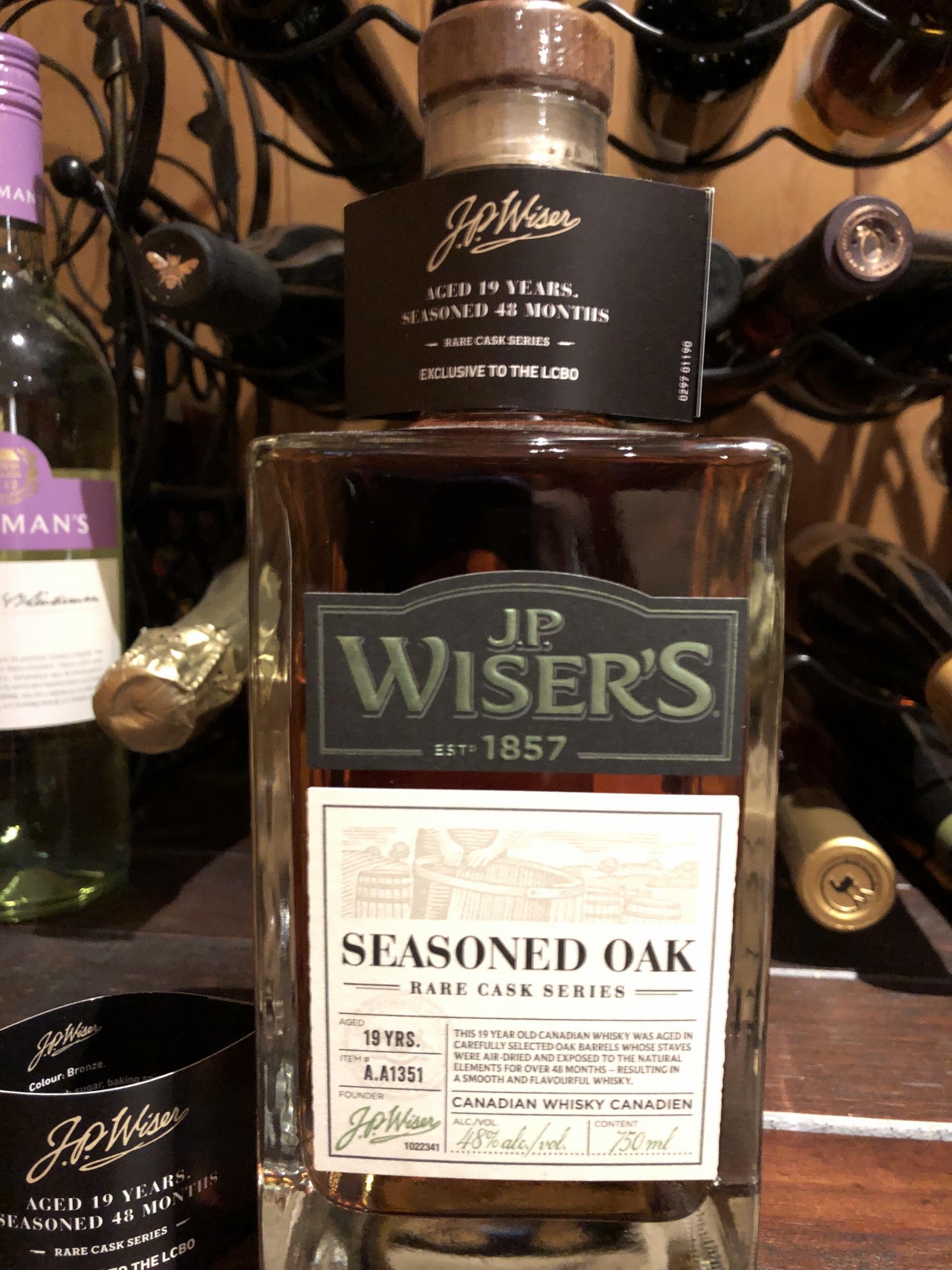