Sadly, I haven't seen Tempest or Laimrig in stores in a few years. I still have a fairly healthy supply given the rate I am going through the bottles. If you ever venture to Ontario...

@Nozinan My nephew and his wife live in the Hamilton area. They have had two children since we last saw them at their wedding about 4 years ago. We are definitely overdue for a trip east. I might surprise you (and the Ontario whisky brotherhood) one day.

@BlueNote, be careful what you wish for...

@BlueNote I agree and I wish Bowmore would handle their standard releases better. When I was at the distillery I got to try some of their hand-filled single casks. WOW those were impressive. One cask in particular caused me to fall in love with Bowmore in a new kind of way. For me the 15yo takes me back to that moment. The 15yo is about 70% of what that single cask was (both in flavor and ABV). I was gifted one bottle of the Bowmore 18yo. I will never re-buy that one. Bowmore has such potential. There is a reason that some of the old desirable casks go for so much on the secondary market.

Well, the Virginia ABC Liquor Control board continues to flabbergast me. It appears to me that they have decided that Single Malt Scotch simply doesn’t sell. When I moved here 8 years ago there was typically twice as much scotch on an ABC store shelf as there was bourbon. Today, that number has flipped. And because the stores have not grown in that time that means they are sacrificing Scotch offerings to have more room for bourbon. I already told you about Bruichladdich the Classic Laddie. And then on the 1st of November it was Bowmore 15yo. Just this week they listed a whole host of closeout whiskies. This means that the prices have been reduced by 50%. The following is not exhaustive, but gives you an idea:

In the world of American Whiskey closeout

Yesterday I hit 8 different stores in my area looking for any of these bottles. I managed to find two bottles of the Russell’s Reserve Single Barrel Rye for $32.59 each. The were on the shelf still listed at $64.99. That is why they hadn’t sold yet. But that was it. I have given up on finding the Ardbeg 21yo. I would have bought 3 bottles at that price if I could have found it.

@Nock those are astonishing prices and worth searching out. It's a pity that it is so difficult working out which shops still have any stock left. Surely those prices must be at a loss. I've never seen alcohol discounted by more than about 20%. Crazy stuff there

@Nock Reminds me of the 2-3 bottles of Amrut single cask (bourbon) that were reduced to $40 - I kept chasing them on the site...never caught up...

Obviously, looking at those prices most of us would love nothing more to go back and buy up the lot. Sadly, those days are gone.

However, today I had that time travel opportunity. The geniuses as the Virginia ABC stores decided that they no longer wanted the Ardbeg 10yo in the warehouse tins cluttering up their store shelves. So, they decided to put in on closeout sale. Which means half price. So . . . Ardbeg 10yo on sale for $27.09. With tax that came to $28.72 or £22.26 . . . that is lower than the price at Loch Fyne from 20 years ago. Simply unbelievable.

My first reaction to seeing it on the shelf was to buy 3 bottles. I didn’t know the batch. I might not love it. But as I got to my car I thought, “What am I thinking? What would I do to go back in time and buy all of those bottles at this price?’’ So, I went back in and bought the rest. Then I went to another store to buy more. I have now bought all the bottles available in my region. Sadly, only 9. But still Ardbeg 10yo at $28.82. A grand total of $258.44 including tax for 9 bottles of Ardbeg 10yo. One single bottle of Ardbeg 19yo is currently going for $299.99 in my stores. To say I am pleased with my choice is an understatement.

Oh, and you might like to know that it is in fact a spot-on batch of Ardbeg 10yo. I will have to put it up against some of my favorite batches from the past. More time travel . . .

2 months ago 9Who liked this? 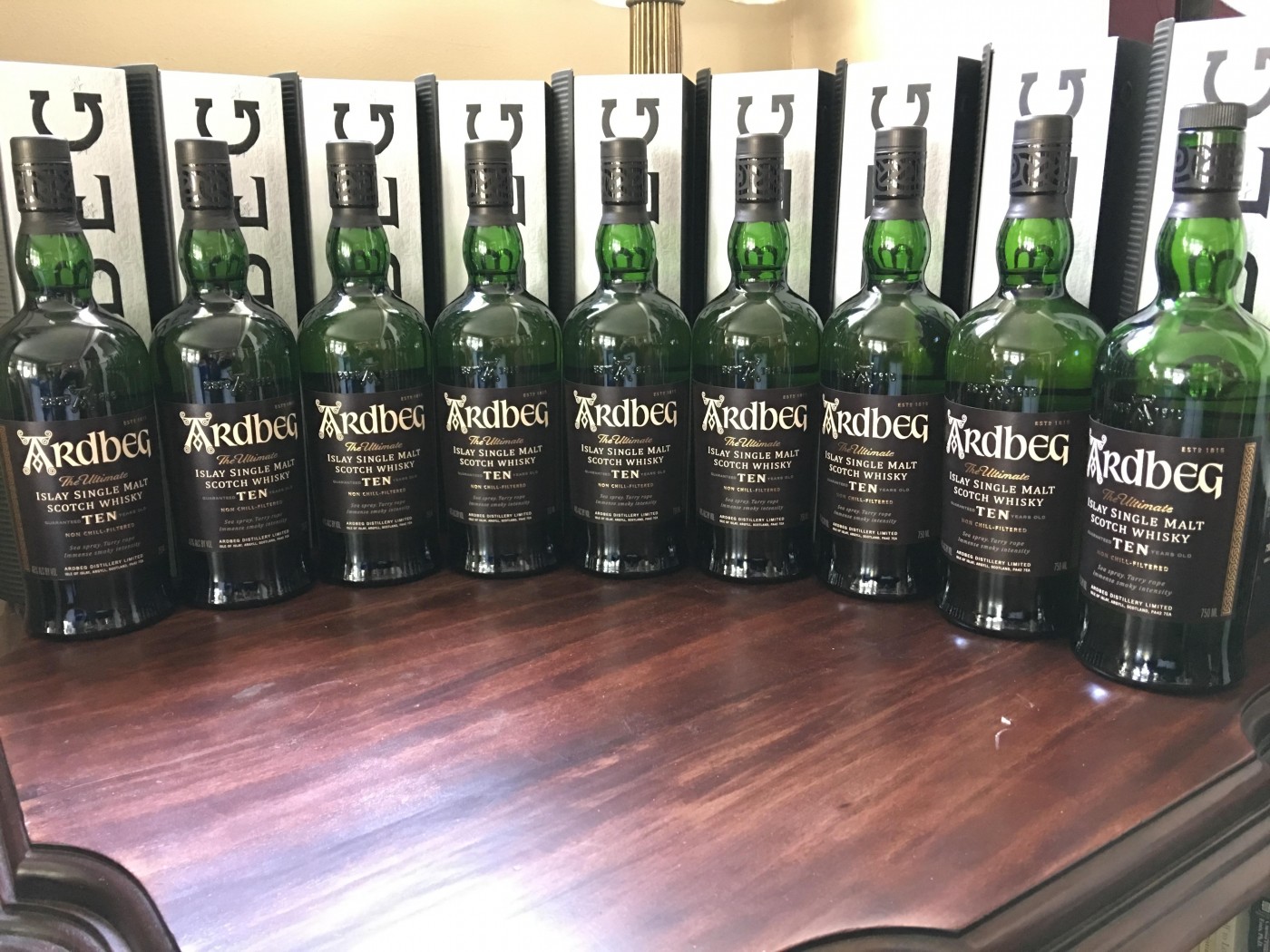 @Nock, yes I'd call that decisive! No need to rush through them. Now you can spend your time and money on the 19 to 50 year olds.

defined as a wish I could have even bought one at that price but at the same time I am happy for your good fortune.

@Victor Thanks! Yes, I expect that I have enough bottles of Ardbeg TEN to last me for quite some time (decades). Hopefully through this 25% price increase. I am so glad to pick up so many at such a price. I expect to see bottle of Ardbeg 10yo pushing $70 by the summer.

@Nozinan I hear you. And thanks. I know how horrible prices are in your area. Maybe soon you can make it down this way and do some hunting?

What I am most excited about is that I can now run some of those experiments I have wanted to try for ages. I will soon open one bottle and decant half into an empty Ardbeg 10yo bottle. So with two half bottles I will gas one and leave the other alone. Then I can check on them in a few years. I will also try to pour off a few different size sample bottles. Then, in a few years I can crack a fresh bottle and see how close the gassed, non-gassed, and miniatures held up.

I have so many miniatures right now. Some have been in 50mL bottles for 10 years. I am scared to even check on them.

I also plan on some blending experiments with Macallan 12yo, Aberlour A'Bunadh, and other sherried malts. I also like the thought of adding some Everclear to try and raise the ABV up closer to 50% ABV which is my preferred minimum drinking strength.

@Nock sounds great! Everclear additions should be very interesting experiments. Maybe try some straight sherry experiments and high proof rum additions. With the rum I'd go with either high proof unwooded rum, like Wray and Nephew, or a 151 with rather light flavours. Not sure what that would be now. I have some old Don Quixote 151 I bought in 1982 that I'd try if the bottle were open. Bacardi 151 might have light enough flavours for the job. That said it will also be interesting to see what Lemon Hart 151 and Smith & Cross Jamaican Pot Still Rums taste like combined with Ardbeg 10.

Ooohhhhhh, I know what you mean about fearing what might have happened inside all of those old 50 ml minis I have lying around.

For those in the UK... I just got a note that Amazon.co.uk is having a lightning deal for the next 5 hours on Caol Ila 18 for £64. Not for me, but I know there are some hardcore CI fans out there... ;)

@Nock - That is an unbelievable price- I'd have stocked up as well! I did pick up one of those Warehouse 10's recently after a ralfy review where he thought it was a slightly better batch than the standard 10 - that and it was on offer .. but not £20 on offer

I decided NOT to buy any new whisky this month... which makes it VERY hard to resist another one of those crazy deals.... Springbank 21 for €64! sigh

Total failure... I couldn't resist checking the cost of this one in the UK, and.... at the £56 I paid for it, I guess it was just irresistible! So, I got it.

And I'm wondering what batch / year it is, for it seems it's an old packaging (see image).

2 months ago 5Who liked this? 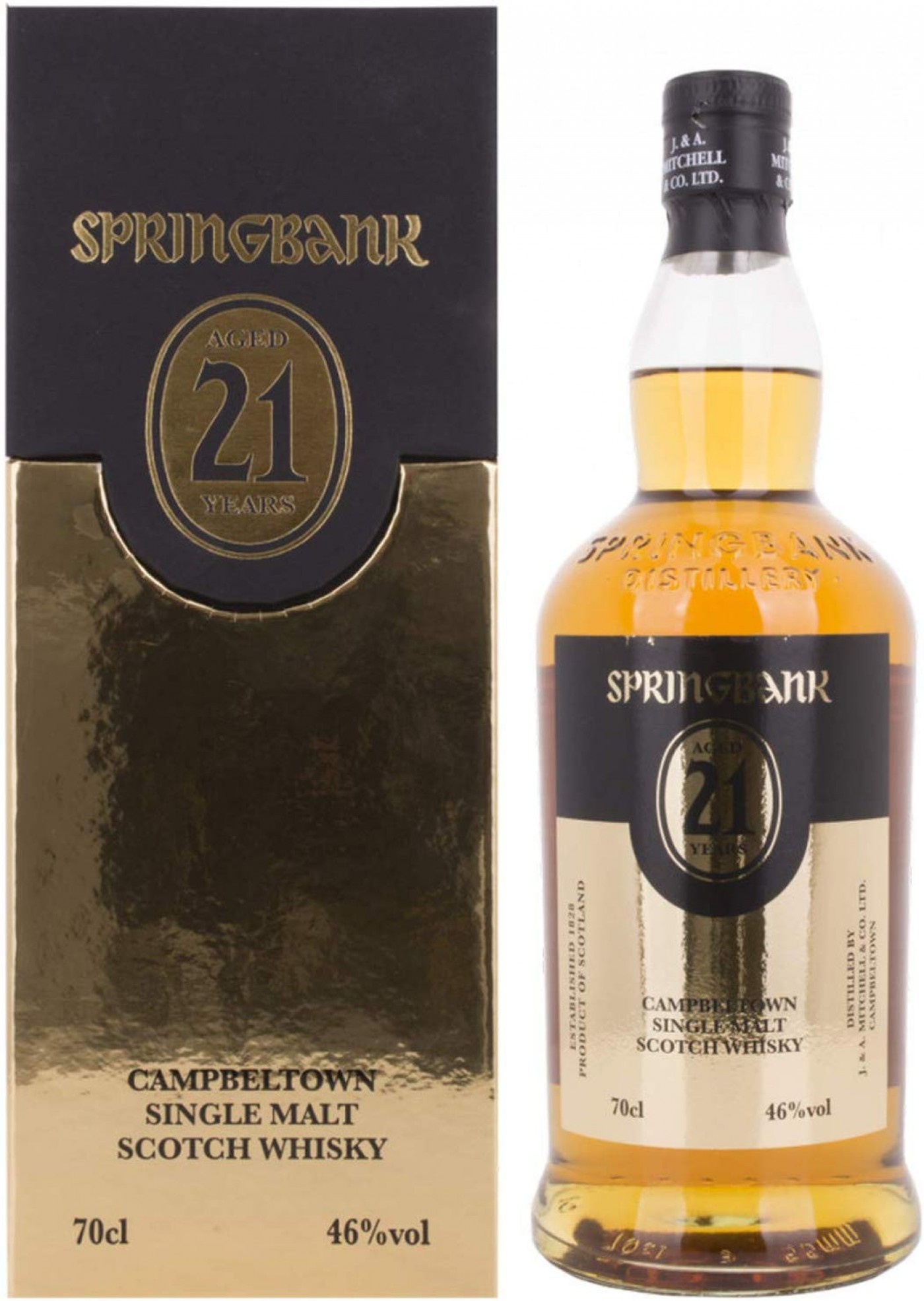 @RikS 56GBP is crazy! Who wouldn't jump all over that. Sorry, I'm no help identifying the batch of it. You should find a bottling 'stamp' on the side near the base though.

@Hewie I know... I'm just waiting to get an email that there was something wrong with the price and they've cancelled.. but let's see :) And yes, if indeed I get it, it's a pretty bonkers price!

@RikS That price is unbelievable! I hope it works out. Did you just order one bottle?

@RikS That might be the score of the decade. I hope you get it. If so you’d better order up a bunch more before they wake up.

@BlueNote I just got a message from the vendor that Sadly.... they're completely out of stock of the product, and have canceled/reimbursed.

I intend to make some noise however with the sales channel for my personal entertainment, for in fact, they are NOT completely out of stock... they just bumped up the price to €450 instead of €64.

@RikS That totally stinks . . . but was expected. Sorry.

@RikS - That's a shame, mate! Such are the pitfalls of some online purchases.

I have a slightly similar concern but I'm hoping I've got away with it ...

In short, I ordered a Pikesville rye and a Corralejo reposado tequila in the BF deals off of a well-known retailer. I then decided that the price of the rye was too good to not take more advantage of so cancelled the tequila and got two ryes instead. They, however, forgot to amend the invoice so it seems as if the two bottles that just arrived cost me less than £90. They would normally cost c£150!