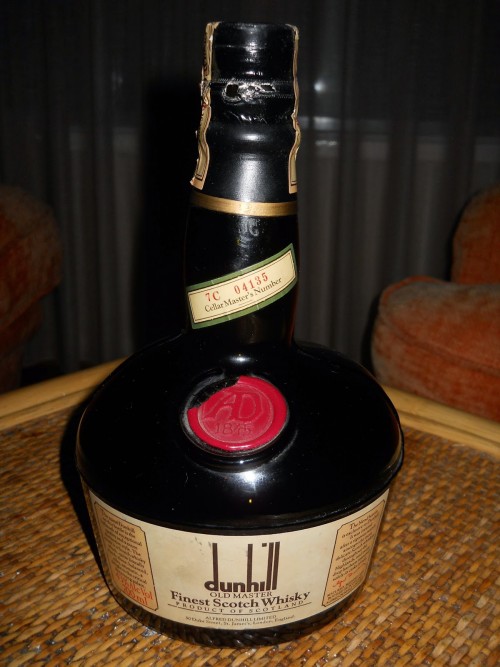 Alfred Dunhill is a name inextricably linked to luxury. Not only luxury goods, from fragrances and specialty tobacco to tailored clothes to expensive fountain pens and wristwatches, but a luxurious lifestyle epitomized by golf tournaments branding its name or even details such as the late Sean Connery's using a Dunhill lighter in the very first 007 installment, Dr No.

For a while, Dunhill decided to enter the scotch world, and produced two or three different blends, that are now long gone (this bottle is from the 1970s) and were, of course, a luxury good luxuriously bottled and packaged. Fancy black bottle that looks like an inverted T, boasting a red wax seal that bears Alfred Dunhill initials. Beautiful.

I got one bottle, and only one, from an old high-profile restaurant that had declared bankruptcy and were trying to cash in as much and as fast as possible, so it was one of these odd moments that you either grab immediately or they slip away. Lucky me, it was the former, not the latter. I opened it to share with some close friends, tasting it in several ways (neat, water, ice, sparkling water, soda) and even pairing it with special foods to try and get the most out of it. It was a very special evening, back in October, 2014.

And what about the contents? Well, it pours a very dense, glossy amber to ocher with that gorgeous green cast that some whiskies display and that I, personally, love. Aroma is intense indeed, and as the dram sits in its glass the room gets slowly parfumed by a lovely scotch fragrance. Everything is balanced: sweet notes (caramel, vanilla, honey), wooden accents (cedar, cypress, oak), citrus (orange blosssom, lemon peel), coffee beans, beeswax, and a pleasant tinge of pencil shavings. Delicious.

Mouthfeel is, as forecasted by the visual phase, veeery dense and rich. Silky, even velvety tactile sensations, despite its powerful alcohol contents. Midpalate you get a rainbow of flavors: umami, salty, even a touch of metal. Warm, pleasant finish, incredibly long-lasting, with new hints of honey, coffee, citrus... and new ones of forest undergrowth and even fragrant porcini mushrooms. One of the best drams I've had in my life.

Nice review! I keep seeing these at auction and your review has convinced me getting a bottle might be a good move.

Thank you, @RianC, and please let us know what you think about it when you finally get one.