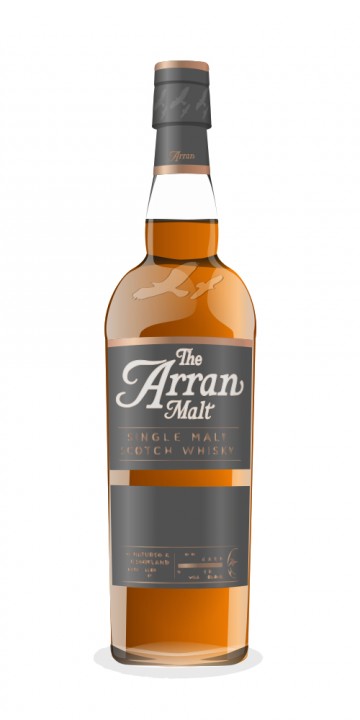 The nose starts fresh on red apples in a frying pan, sprinkled with sugar and quite a dollop of butter. A salty touch leads to the peat to the nose, slowly but surely. Cherries and raisins in the mix and start the stew. A bit of mint, sweet spices and some oak. After a few minutes some chocolate, filled with apricot jam, kicks in. Outstanding. Or should I say, devlish?

Boy, very creamy and fruity on the palate. The baked apples have come out of the pan, drenched in honey. A bit of lemon zest on the side. In the mean time peat, menthol, cayenne pepper and nutmeg provide a warm and spicy background. Rich and round and very complex.

It leaves you with a long, sweet and spicy finish, in which the smoke and the oak get the final word.

This is no dram for little angels and fulfills the promise of the hype. A devilish seduction. Around 80 EUR when first released, but at some places you will need more already, unfortunately.

When I heard about this one a few weeks ago, I was very keen to know more. What an unusual name (good work PR guys!). But when I saw the amazing box and the bottle and heard what’s inside, I knew I HAD to try this one sooner or later (sooner is better). If this is the first time you’ve heard about this new Arran I must tell you what’s it all about. In essence this is a vatting of hand picked casks by Arran’s distillery manager James MacTaggart, and features both peated and unpeated casks (this is a first for Arran to mix those two types of malt). The peated ones are quite young aged 6 and have been aged in ex-Bourbon casks, while the unpeated spent more time in Sherry casks (the oldest being 16 yo). All in all 24 casks were used for this bottling, and mixed together bottled un-chill filtered at cask strength of 52.3% ABV. Sweet! This is a fairly limited release (as limited as they go, when featuring quite a few casks) of 6,660 (devilish eh?) bottles. Ok, It sounds lovely, It looks even more lovely (see pic), it must taste lovely, right? Well, it does. and now we’re going to have a wee taste.

Nose: Starting with some sherry goodness:dried fruit,Mainly apricot and a veil of peat. Earthy peat not medicinal but it’s there alright! Some more Kirsch and orange peel, mint anyone?

Palate: a great combo of dried fruit salad, peat and smoke with an earthy touch to it. Dirty sherry sort of. Just as I like it. Sweet yet dark. With the peat giving it another dimension without going into the smoky Islay kind.

The best Arran I’ve tasted. I really liked the sherry / peat combo, it’s very different and not overpowering (the peat), and the sum is greater than its parts. Good selection of casks, and vatting. A good buy, and lovely bottle and presentation too. Good stuff.

I saw the PR for this, and would love to get my hands on it, but so far no bottles have arrived in Canada... :(

Only 600 bottles are suppose to find their way to the States, not sure how many will make it to our friends up North! I hope you find a bottle!