Average score from 5 reviews and 8 ratings 84 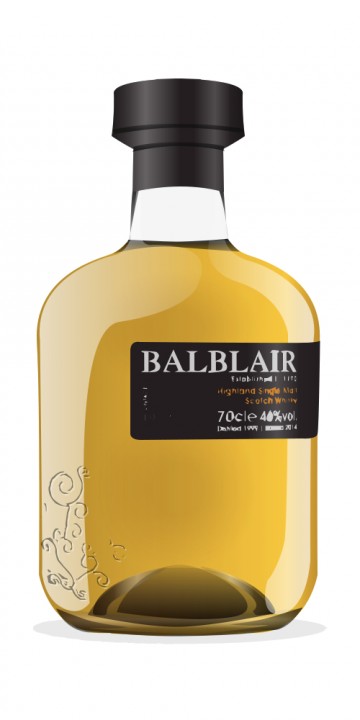 As the late Rosemary Clooney sang:

That’s virtually a review of Balblair 2000, nearly 50 years before its time. This is one of the fruitiest whiskies I’ve tasted – and I think those fruits spent some serious time in the local candy and ice cream shops to boot.

I can readily understand why many refer to this as a summertime dram, as it’s quite light, refreshing, and not too demanding. It’s impressively complex in its lightness, but its many layers are tissue-paper thin, and it tastes even younger than its mere 10 years. Pleasant stuff, but it won’t knock your argyles off.

Nose: Why does this whisky bring to mind corny old songs? A good whiff, and I’m humming “Put de lime in de coconut and drink ‘em bot’ up…”. Citrus, coconut, honey, vanilla, pineapple, melon, banana, loads of malt, and yes, apple-a plum and apricot-a too. I think Carmen Miranda lost her hat in my Glencairn.

Palate: Pretty much everything that’s on the nose, with more emphasis now on the malt, vanilla, and citrus fruits. Some weak tea, cinnamon, and touches of dark chocolate as it develops. The finish is slightly disappointing, in that it’s suddenly bitter and chalky, but it’s fairly long-lasting and plenty of the fruit bouquet remains.

Balblair 2000 is just not substantial enough for me to award it the highest marks, but it’s very much a fun whisky (and I’ve never described a whisky as “fun” before). For all its many layers, there’s not much body to it, but that may be the point. Sweet, easygoing, and very reasonably priced, it’s the Grandma’s lemonade of whiskies.

Nose: There is loads of fruit up front: Golden apples, grapefruit and pineapple notes emerge first, wrapped in honey aromas. Over time the fruits turn tropical - mango and banana - with vanilla and biscuity aromas.

Palate: A light mouthfeel, but the flavours are quite intense. Melon, mango and bananas first with hints of sweet spices. The barley flavours are noticeable.

Finish: Finishes clean and fresh, with more of the spice and vanilla, and maybe a touch of floral character at the death.

Comments: I first tried this at Whisky Live Paris, which probably didn't do it justice as it was lost on my palate. I can appreciate it much more in isolation. The older Balblair bottlings have more to offer, but I'd happily enjoy a dram on a summer afternoon.

Balblair 2000 is the replacement for the previous Balblair 1997 which I scored 81. It’s still matured in first fill American oak.

Nose: full of pear drops and grainy aromas which give away its young age. It seems hints of new-make are becoming popular these days (yet in a more sophisticated way than actual new-make). A more tropical note as well (banana, some mango, coconut maybe). Very fruity and lively with just a touch of vanilla. I really like this nose.

Mouth: quite light, sweet and fruity with some muesli, peaches, pineapple and white grapes. A light spicy edge (soft pepper and sweet ginger).

Finish: still fruity, but it takes the vanilla and spices a bit further.

Balblair 2000 plays around with notes of youngish whisky, but in a smooth and entertaining way. One to revisit when the summer returns!

Nose : What a nice exotic fruit salad we got over here, some vanilla and honey too. during the tasting i described the nose as ‘Vanilla Ice cream, with some honey drizzled all over, and nuts on top’ quite poetic, i agree but very true. This young nose is very very pleasant and appetizing. i couldn’t wait to try some on the palate. Lucas had outdone himself describing this one as a sweetish girl..

Palate: Sweet, honey, floral notes combined with hints of coconut , ginger and white pepper. The fruits are there also, a lovely melange that’s hard to pinpoint. all in all very fruity and spiced.

Other comments: "A seriously well made and deftly executed whisky. Fruit cake, dried fruits, apples, custard apple, unripe banana. A little barley on the nose. Taste is sweet and creamy at first, gentle spices next and just enough oaky bite at the end giving good length. A classy dram. I could drink a lot of this."

"Creamy apples and pears on the nose. Spice, even pepper and then fruit and malt on the palate, mouth coating and a lot bigger and complex in taste than the nose suggests. Quite a short clean finish. A very nice whisky"