Average score from 2 reviews and 4 ratings 85 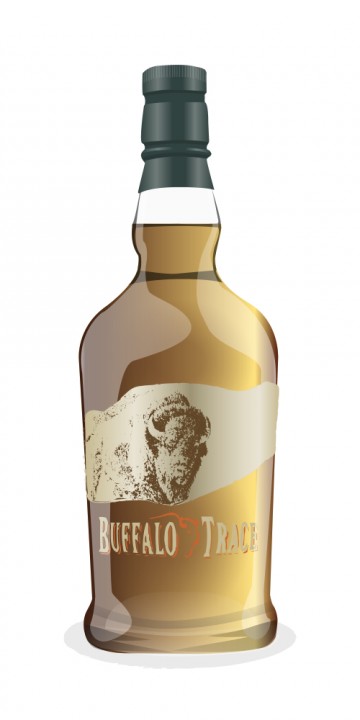 According to a couple of online sources, the Buffalo Trace Distillery has more than 1500 experimental barrels of whiskey aging in their warehouses. In their stated quest for the “perfect bourbon,” BT uses these barrels to analyze the effects of everything from mash bills and oak strains to temperature and air quality. The distillery is quite serious about experimentation, having opened their “Warehouse X,” designated for experimental barrels, just a couple of weeks ago.

This Buffalo Trace Giant French Oak Barrel was aged for 23 years in a huge 135-gallon barrel (with 53 gallons being the more typical bourbon-barrel size). All bottles (375ml size) came from this barrel, which means about 1360 bottles, if my wobbly math can be trusted. I suppose if you’re going to age bourbon 23 years, large barrels are the way to go. Old bourbons in small barrels can become over-oaked, so the combination of more years plus less spirit-wood contact seems a well-calculated experiment. I have to admit I find it too “oaky” nevertheless, but there are abundant strengths to compensate for this one deficiency.

Nose: Mostly vanilla, caramel, wood, and a fruity note that seems to go back and forth between oranges and sour apples. Not as sweet as it might sound, owing to the prominence of the wood and a little trace of dirt. That’s not a criticism. It’s an excellent nose, with the earthy tones adding depth and balance.

Palate: Smooth and rich, with more vanilla, wood, herbal tea, and some of those sassafras candies my grandmother always had. Slightly watery considering the age, but several good layers to explore. The finish reveals the first peppery sting in the experience, although things remain smooth overall. Very woody at the fadeout, with maybe a little cinnamon, rye, and mint lurking in the corners.

Despite my slight misgivings about the abundant wood, this is a truly fine bourbon. I’d gladly buy a bottle of the stuff, if it can still be found. A million thanks to @numen for this sample (and please see his eloquent and better-informed review of this whiskey). I was going to wait until the holidays to break into it, but resisting temptation has never been among my virtues.

A couple of things that I did not know that I learned from the Buffalo Trace tour. First, when a barrel is aged, there is always a loss of bourbon in this process. The longer the aging, the greater the loss. I cannot remember the exact numbers, but if a bourbon is aged over 15 years, there will be a 50% loss (or greater) of bourbon in the barrel. So the 135 gallon barrel stated above would have yielded something far less than 1360 bottles. Second, according to the tour guide was that 80% of the flavor of bourbon comes from the oak barrel. Meaning, I would doubt you could over oak a bourbon, since that is primarily what the flavor is composed of. This is evidenced by the White Dog they let you try after the tour, it is the bourbon before it is put in the barrel. It is pretty nasty stuff and high test at that.

To clarify, this is the 23 year old version-

Buffalo Trace continues to release 1/2 bottles as part of its Experimental Collection, which affords folks the opportunity to see how various factors can affect or contribute to the product in the bottle. With this recent release, Buffalo Trace put out 19 year old and a 23 year old offerings that were aged in Giant French Oak barrels - holding 135 gallons rather than the usual 53. In addition, the barrels had a #3 char rather than the usual Buffalo Trace #4 char. Both offerings use rye bourbon mash recipe #2, were chill-filtered, and bottled at 45% ABV. I missed out on the 19 year, having the option to get one rather than both, and wanted to see how the 23 year did, more out of curiosity than anything else. I also really wanted to compare it to the Pappy Van Winkle 23, which I found over-oaked, as a distillate of similar age, but almost certainly less wood contact.

Nose: Sweet and a little sour, the obvious influence of the wood, but there's no varnish here. First nosing is a bit dark, chocolate flecks, dry sawdust, nougat, and a drop of kirschwasser infused chocolate. There's a strong dose of vanilla, but always hidden behind the other flavors, and that's followed by cinnamon and caramel touched dates. There's no obvious rye grain on the nose, but it reminds me, in terms of structure, of a bottle of Pappy van Winkle 20 from the early 2000s, though darker and with less coconut, and a mix of a delicious 18 year old Willett that I had not so long ago.

Palate: Sweet on entry, medium-body, but it has a bit of a watery texture, if you know what I mean. Honey, fresh tree bark, and then some pepper (there's the rye!). In the mid-palate, the oak shows much more with bitterness and some pleasant varnish(!). Nougat-caramel and something incredibly herbal. I couldn't quite put my finger on it, but it reminded me of a twig with some small leaves that one would find in a medieval apothecary. Also some cinnamon infused vanilla.

Finish: Medium length with a bit more wood as well as some dry and unsweetened chocolate, like a dusty powder. A little coconut and both soft and spicy cinnamons. Vanilla in the recesses, akin to a kitchen after a cake is just put in the oven. The wood plays a strong hand in all this and it has its oaky moments, but never overwhelming. It could stand a bit more strength, a la 48%, but you can tell that much above that and it could well be too tight. A nice, complex little package. B+. I'll give it an 88, but it's probably +/- 1 depending on my mood.