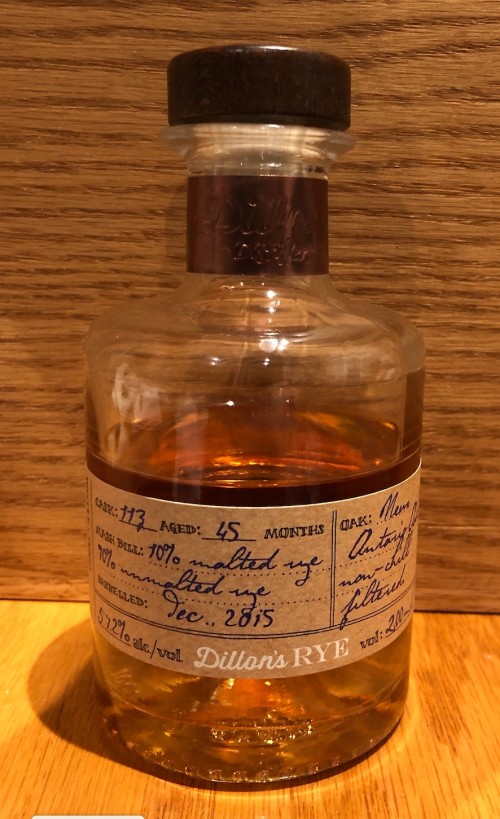 For my 200th review I wanted to pick something special so I chose this limited release expression by Dillon’s distillery in the Niagara region of Ontario.

Not surprisingly, this review comes with a story. Feel free to scroll down to the tasting notes. I bought this in November of last year, as I was starting to appreciate Canadian 100% rye more. I had tasted 2 Lot 40 CS releases by then, and Shelter Point and AP had released some great CS expressions. I saw this on the shelf at the LCBO, and it was CS, NAS and 200cc, so I gave it a shot. I got two, as I thought @paddockjudge might want to try it, and maybe we could do a facetime tasting of it at some point. I got his bottle to him and then we both became busy with our lives.

Fast forward to March 2020, as the COVID apocalypse begins to infiltrate life in Ontario. Since we were no longer going out much, we had a chance to sit down and try it. So we did. And it was “ok”. Now I’m not a rye expert, but it seems to me that each time I’ve poured this since then I’ve enjoyed it more.

What makes this even more special is that early in the time that COVID led to our shutdown, when PPE and disinfectant were scarce, Dillon’s started to produce liquid sanitizer and the batches were distributed free to front-line responders. Since then, they have continued to produce it and they sell it online, including in convenient spray bottles, but some of what they produce is still donated. Very impressive. Our group of home-visiting docs was given 24 bottles, and several made it to my home. I think I’ve used almost 4 bottles. It smells great but since it’s jacked with glycerin and peroxide I have not been brave or stupid enough to taste it. When this COVID thing is behind us I want to make a trip to the distillery to thank them and perhaps taste their newmake…

The bottle (number 0860), drawn from cask 113, is aged 45 months in new Ontario oak. It is non-chill filtered. It was barrelled in December 2015 and bottled in September 2019. For such a small label, that’s a lot of information. But there’s more. It comes wrapped in a paper wrapper, which, when unfolded, provides even more information. This is made from Ontario Rye, and has no added flavourings or colour. It even has information on the distiller (not surprising), the cooper, the miller and the malter, which suggests there is some (or all?) malted rye in the mix.

I wonder if our elected officials might learn from such transparency, but I digress…

This expression is reviewed in a Glencairn in my usual manner, allowing it to settle after which I take my nosing and tasting notes, followed by the addition of a few drops of water, waiting, then nosing and tasting.

Fruity and spicy. Very fresh, high pitched notes. Green apple but also a sweetness. In the background I get pickle juice, just a hint. It works well. Butterscotch and caramel and vanilla. If anything, water seems to mute the nose a little (20.5/25)

Sweet arrival which turns spicy on the development. A little oily on the mouthfeel. Lots of vanilla, some fruit (green apple?). A hint of coffee (reminiscent of the chocolate covered espresso “pillows” candy I used to get from Trader Joe’s, or, reaching much further back into my memory, candies called “Coffee Loves” which we used to get at Barton’s at Cavendish Mall in Montreal). You can tell the alcohol is there, unlike some other ryes that hide their cask strength. But this is less than 4 years old. With water it becomes a bit rougher, the alcohol shows through a bit more. Still quite tasty, with the vanilla and coffee. The mouthfeel is a tad richer. (22/25)

The nose and palate complement each other. Nicely balanced. Not super complex but solid.

In my humble, non-expert opinion, this is a very good rye. I think that if future batches spend a bit more time in wood, they will come out even better. I get the feeling a 7 year old version of this would be scored in the 90s.

I wish I had picked up another bottle. It is no longer listed at the LCBO, and it doesn’t show up on the distillery website. I really hope another batch is released soon. After trying this in a 200 cc bottle, I would definitely take a chance on a full-size bottle (and I would open it right away to see if I wanted to stock up).

Canadian whisky has a bright future as long as they remember that we like our whiskies at or near cask strength.

Thank you Dillon’s for a really good rye, and for your contribution to our battle against Covid.