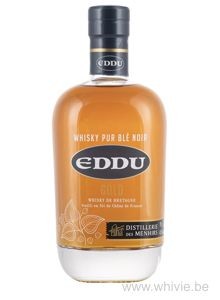 After rediscovering the Eddu Brocéliande, I thought it would be a good idea to try Eddu's Silver and Gold again. This French whisky is a single grain, distilled from buckwheat. As far as I know, this is unique in the world. I taste it from a bottling from 2021 at 43%. What a nice surprise! Nice and fruity on apples, passion fruit and damson (also called quetsche, a dark blue, almost juiceless plum that is often used for the production of spirits such as slivovitch in the Balkans). Vanilla, lime and honey are also present. Something of star anise and ginger make it a bit spicy on the nose. Amusing! It is very soft on the palate and even a tad creamy. Cherries, plums, something that reminds me of apple cider – I often have that with Eddu – and honey. Then even some almonds and something that reminds me of red berries. Cinnamon, ginger, pepper and licorice. This one is by no means boring. The finish is medium long on calvados (those apples are there again!), peach and lime with some pepper on the deathbed. Lightly drying. If you approach this with a Scotch malt in mind, you may be left disappointed. If you approach this with an open mind, you will notice that this is a fascinating and very tasty French grain. I'm a fan. They are making serious progress in my opinion.