Average score from 3 reviews and 6 ratings 84 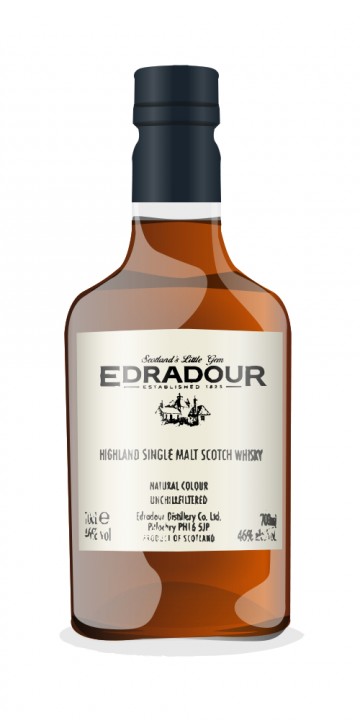 This malt was selected by Douglas Maclean, a well-known singer in Scotland and named after his most famous song about the country he so dearly loves. Edradour once famed itself as the smallest distillery in Scotland, but there are various pretenders now who can claim that title: Daftmill, Kilchoman, Wolfburn, Loch Ewe (although can we even call this a real distillery?,...

I really love the dram-song connection here, it enriches the experience once you know that Douglas was trying to find a cask that one way or the other translated his lyrics into water of life.

Nose: a whiff of sherry, leather, salty ham, honey, figs and sultanas, a nice and fruity nose. Add some water and the fruity character of this whisky blossoms, more scents of orange breaking through. The sherry aroma is surprisingly enough not too dominant, even after 12 years in an Oloroso cask, maybe a refill cask?

Taste: what this malt needs is a few drops of water, without it you won't get much flavour out of this one. Hints of citrus, orange, honey, strips of leather.

Finish: Quite a long finish actually, this Edradour will leave its traces behind for quite some time. Some spices and oranges, but it will feel soft in your mouth.

Conclusion: not sure, this is definitely an easy sipper, smooth, not too complex. I do love the nose, but its body and finish don't live up to great expectations. That said, there is nothing wrong with this whisky, its not one of the greater malts available on the market nowadays, but I can guarantee that it is an honest and enjoyable dram. It has become quite pricey, since its release almost five years ago, but if you find it somewhere on a shelf at a reasonable price, don't hesitate to pick it up.

Edradour is, since 2002, very well known for its releases of finishes and single casks (while before, most of their outturn went into blends) as well as the heavily peated expressions under the name of Ballechin.

One of their latest releases, in September 2009, is this Caledonian 12 year old. It was selected especially for the Year of Homecoming celebrations, by First Minister Alex Salmond and the famous singer songwriter Douglas Maclean.

Douglas Maclean – affectionately called Dougie – selected a single cask in May 2009. It was an oloroso sherry cask that was filled in 1997 (he also selected the vintage for the general release afterwards, because the expression was added to the core range since it was so well received). He named the whisky Caledonia, after his most popular song. In an interview, he said: ‘ I wrote Caledonia, in 1977 on a beach in Brittany, France, when I was genuinely homesick for Scotland. My life has always been based in Perthshire. For me, the location of Edradour, with its neat cluster of whitewashed buildings, traditional equipment and employment of ancient methods of making single malt whisky, combined with its state of the art bottling facility, typify Caledonia. So it is great to be joining forces with Andrew Symington and Edradour Distillery, to bring you this wonderfully rich and complex 12 year old single malt.’

That’s enough of a history lesson on this first day of school. Let’s taste.

The color, full gold to amber, is inviting. It looks appetising and there are nice legs in the glass.

On the nose I get restrained sweet sherry, absolutely not over the top and nicely counterbalanced by honey, fruit (sultanas and figs) and a whiff of peat and cloves. The last four years in the oloroso cask come out beautifully. A pleasant surprise (after my less successful introduction with the standard 10 Year Old).

It is full-bodied and rolls softly over the tongue. The honey and fruit (including oranges) return immediately, upholstered with nuts, caramel and something leather-like. The small touch of peat, typical for Edradour, is not lacking.

The finish is sprinkled with spices, perfect in length and a little dry at the death.

This is a very nice expression from Scotland’s reputed smallest distillery, not only for patriots, but for whiskylovers in general. Not a grand whisky, but a lot more interesting (complex) than the standard 10 Year Old. Available for approx £40.

@LeFrog, let's agree to disagree on that one :-)