Average score from 2 reviews and 3 ratings 93 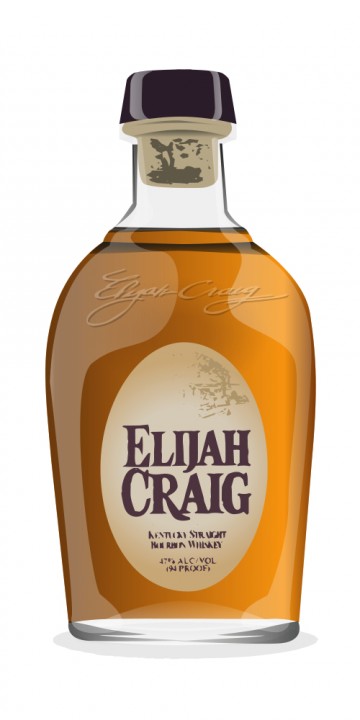 Bourbon, ah my very first love, my introduction to the Whiskey World. A love that I've had for going on 15 years now.

Now I enjoy bourbon neat, in my trusty glencairn.

Now you may wonder why I started this review up with that little trip through nostalgia, the simple fact of the matter is that I've fallen in love again, and I've fallen hard.

A while back I helped out a friend of mine, doing some work, and when he asked how I'd like to be paid I said whisk(e)y, figuring I'd get something nice, but unexceptional.

Instead he gave me the Elijah Craig 20 year old single barrel.

To say I was blown away is an understatement to say the least.

So easily one of the oldest bourbons I've ever tried, much less owned, this whiskey was drawn from the same lot as Whisky Advocates American Whiskey of the Year was, which means it was pulled at the same, it doesn't mean it was the same barrel.

However that's still pretty high praise as you're not likely to age a bourbon for 20 years and then bottle it as a single barrel if it's crap, or so I believe in my own uneducated opinion.

First off the color is lovely, a very dark amber that begs you to take a taste, screams to you that you need to give it a nose, with long sexy legs.

Yeah that nose is AWESOME! At times it reminds of a very refined Stagg.

Actually I'd be just fine sitting here nosing this whiskey for hours, to hell with drinking it. There's something new each time you go back to it.

But I digress I should honestly take a sip as while it looks pretty in the glass, it eventually will just look sort of odd having a house full of glencairns full of whisky.

On first sipping the first thing you get is the charred oak, then the oak tannins, leather, vanilla, red vines, very drying to the palate, but it continues, brown sugar, cinnamon, nutmeg, sultanas, figs, more vanilla, leather, god this is good.

Even though it's dry, really dry, it's got a great mouthfeel, and it's so tasting and welcoming that you say screw it, let's have another taste. There's NO burn on this whiskey, this is literally a perfect example of the "Sipping bourbon."

The finish is very mild, but lingers on and on, with vanilla and brown sugar sitting on the palate, 5, 10 minutes after you've finished your last drink.

This is by no means a cheap whiskey, running at around $280-$300 a bottle, and will be very difficult to find as most bottleshops won't stock it, but it's completely worth the hunt.

The only downside to this whiskey is that it's so delicious and easy drinking that a bottle goes much faster then I'd like.

Think you don't like bourbon, I dare you to say that after trying this bad boy.

Now all I need is another bottle of this to make my day.

Thanks guys! It is really brilliant stuff! Going to go start hunting around for a second bottle. I'm notoriously slow on drinking my whisky as I'm always wanting to try new stuff. However in less then a month I've drunk half the bottle which for me is CRAZY fast. It's just too good!

However as US prices have just been mentioned, god I'm jealous of those. It's funny as I tell my Aussie friends that while in America the good stuff is bloody cheap, oftentimes you need to know someone who knows someone or search for hours to find the rare staff like the Pappy's, etc.

Over here in Australia they're still rare, and expensive, but as long as you have the cash they're realistically not that difficult to acquire.

Oh and just because I'm chuffed as can be, I've got a bottle of Pappy Van Winkle 20 year old on the way!!!

@SquidgyAsh, big congrats on your getting a bottle of Elijah Craig 20 YO. Your friend has good taste. Ah! The old Bardstown Heaven Hill distillery Elijah Craig juice! There isn't a lot of that left. So good, though. I'd love a taste of that 20 YO or the 21 YO. Haven't had a taste of either yet...but God do I love the 18 YO...

The Elijah Craig 20 Year Old is the follow up to the popular 18 Year Old. Upon release it won the American Whiskey of the Year award. Elijah Craig is considered to be the father of bourbon. It is produced by Heaven Hill and was bottled for the first time in honor of the 20th anniversary of the Kentucky Bourbon Festival.

Up front on the nose I get a huge dollop of vanilla and quite a lot of furniture polish, before the fruit hits the buds, so to speak. Plum liqueur, raisins, peach, apricots and berry jam. Almonds and raisins, as in those chocolate disks, if you know what I mean. Nougat and coconut. Mint and cinnamon. Touch of tobacco. This is quite complex.

It is full and creamy on the palate. Dark fruit, mostly raisins, are joined by all kinds of candied fruits and dark sugar. Cinnamon and nutmeg. Cedar wood and some peppers. Lightly drying from the oak, but juicy enough to stay balanced.

The medium long finish is warm and drying.

Boy, this is a class bourbon. Thank you, Bart!