Worked a little later tonight so treated myself to a new local Caribbean take away. Jerk pork belly, rice & peas, a dumpling and some coleslaw - very tasty and warming! I don't eat much Jamaican fayre but always enjoy it when I do.

I may wash it down with a Nikka FTB, if this heartburn tapers off ...

@RianC sounds delicious but you forgot the key ingredient

@Nozinan - Ha! I kid you not I realised this afternoon I hadn't taken my Omeprazole in two days!

7 months ago 8Who liked this? 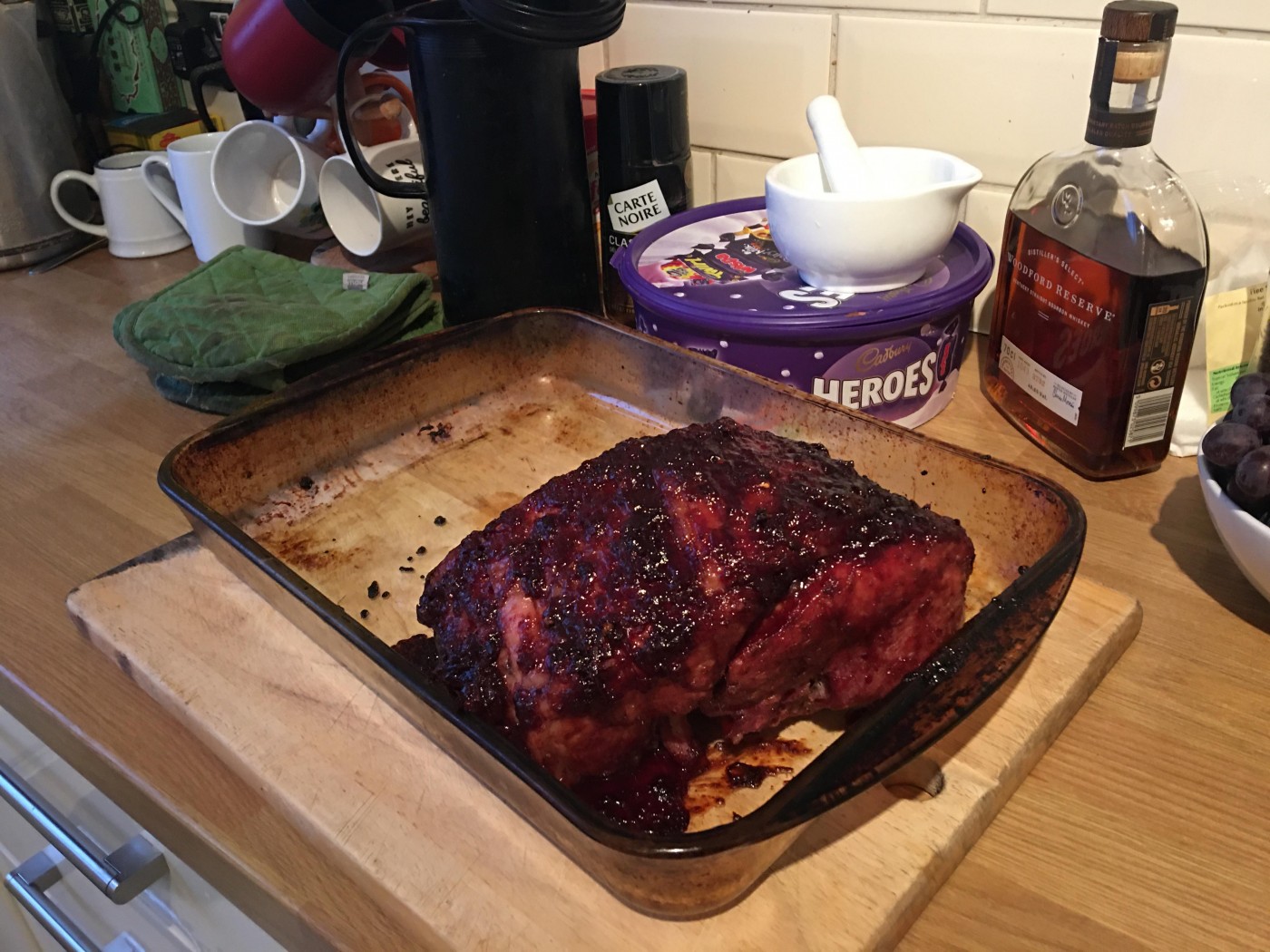 7 months ago 4Who liked this?

@talexander - Thanks, man! I usually have a marmalade and whisky glaze with mustard powder but this is awesome. Tastes like Cherry Coke!

Incidentally, every time I open this thread the first thing I see is @paddockjudge‘s massive meatball sandwich staring me in the face and all I can think of is taking a big bite out of that baby.

@RianC Damn...looks glazed and tasty, a little glass of the bourbon to go along with it and I'd be a happy camper.

@cricklewood @BlueNote - from a Hairy Bikers recipe, if anyone's interested. I was worried it would be too gingery, or sweet, but everything came together for the glaze really nicely. Goes with the ham perfectly - which I boiled with veggies, bay, thyme, peppercorns and juniper berries and made a huge pot of pea soup with the stock today. I need at least one healthy meal a day this time of year

I’ve been without family at home since Wednesday, and making do with leftovers or salad for the most part. Today I finally got motivated to do some cooking. I found some frozen ribs left over from previous roasts and put together a beef and barley soup.

While I was cooking the heck out of the bones I decided to bake some bread to do along with it. Lemony Snicket’s old new bread recipe, it turns out, takes a long time. About 5 h. Today I replaced 1/3 of the white flour with rye and it came out very nice.

Fresh hot soup, warm crusty bread with butter... how can you top that?

Well, maybe with a half ounce pour of Aberlour A’Bunadh batch 49 for dessert...

7 months ago 7Who liked this? 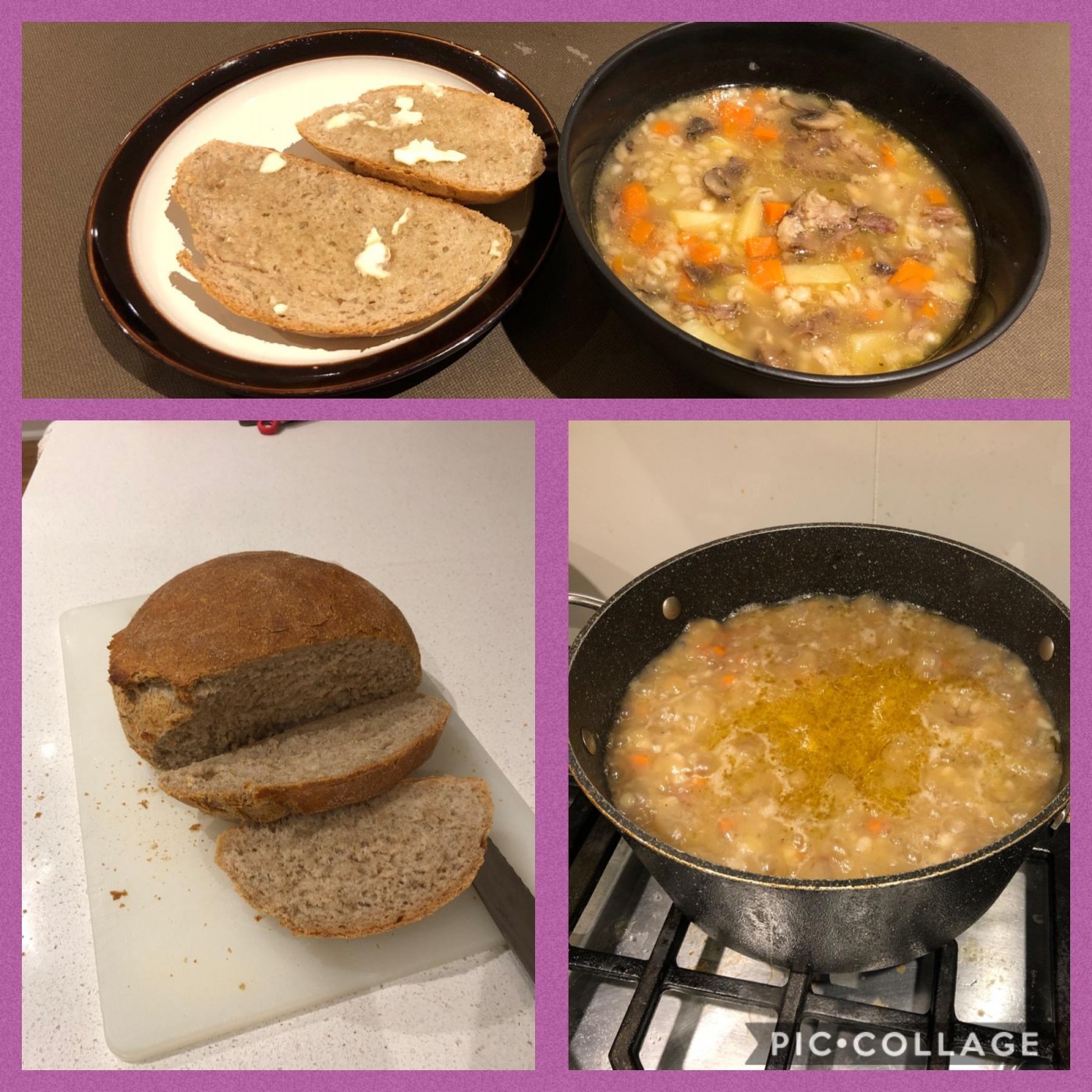 @Nozinan Barley and rye all the way. Nice.

@Nozinan - Man, I could go for a bowl of soup like that right about now.

Got these at Aldi to enhance my Scotch experience. 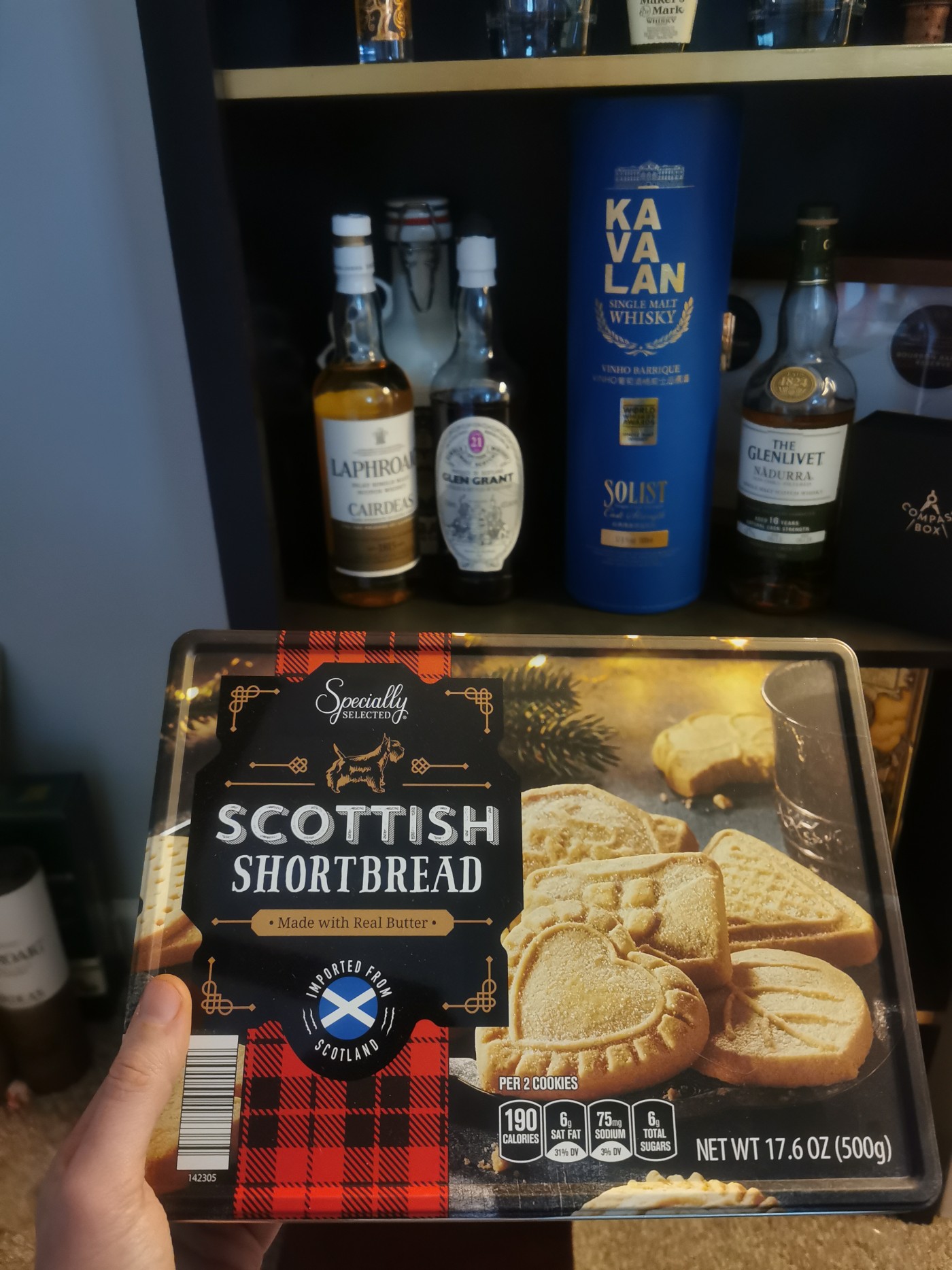 @casualtorture Walker's shortbread cookies are available here in Ontario, made in Aberlour.

A bit late on this due to the holidays but I made Butter Tablet for Christmas this year. My wife made shortbread. 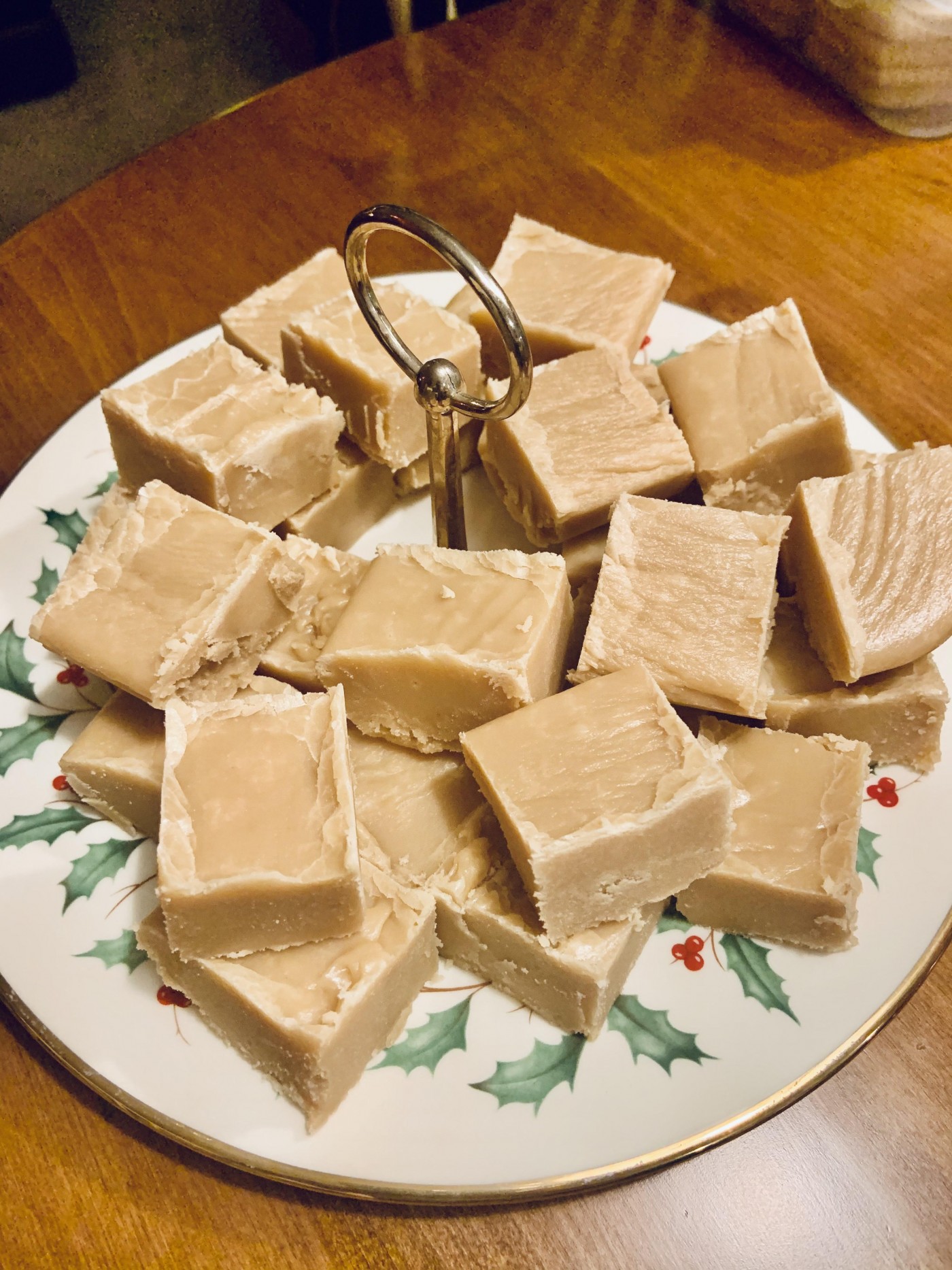 @TracerBullet This picture gave me diabetes.

@talexander Consuming it nearly did to me! Here is the shortbread. Not a lot of sugar but the butter will get you! 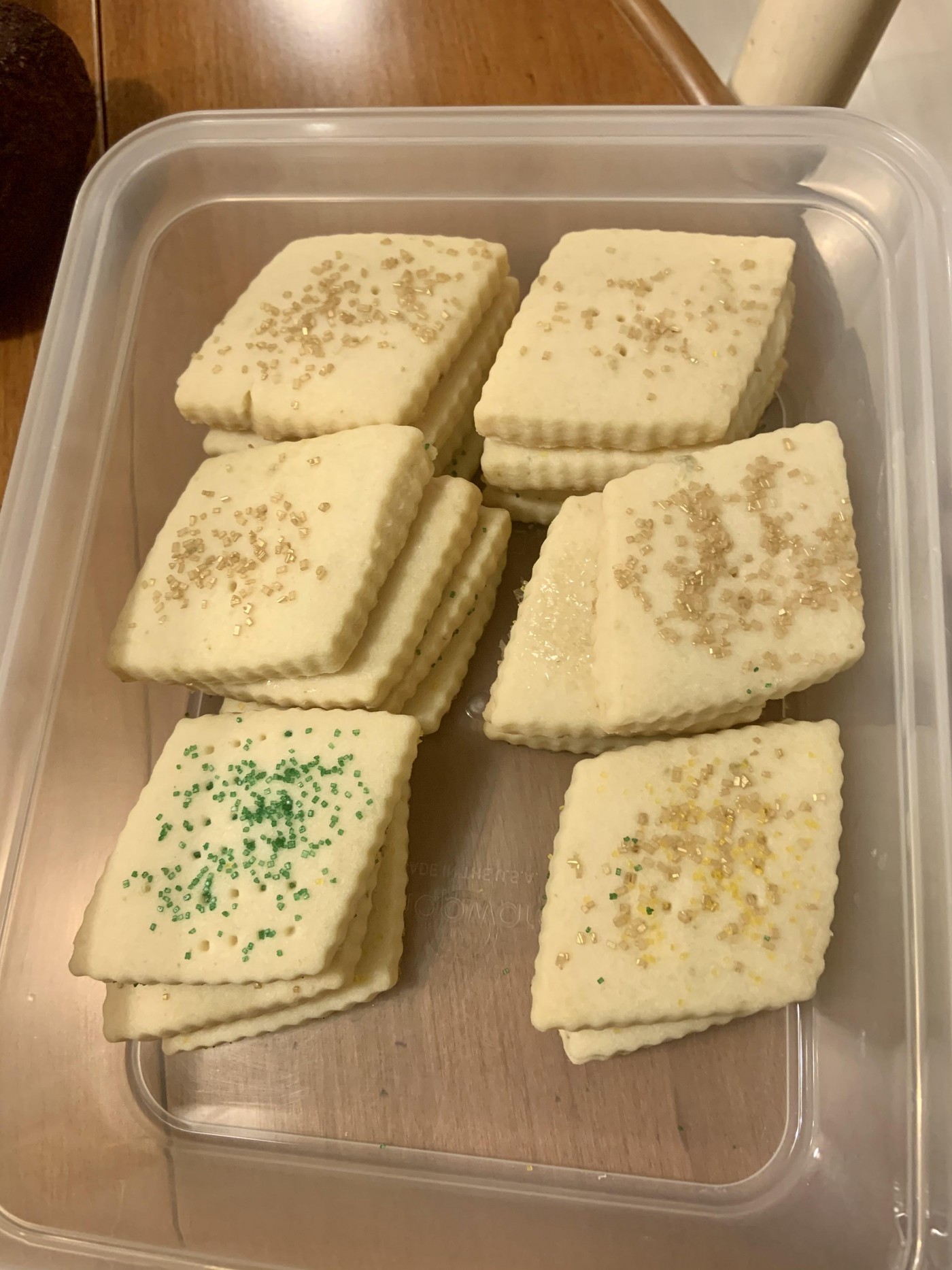 @TracerBullet OK - I'll take the high blood pressure over the diabetes any day.

I will stop myself from commenting on your medical mischief, and focus on our dinner.

Missing from the photo, my mother’s challah and a killer Caesar salad.

For dessert, I flambéd bananas using a freshly cracked bottle of Smith And Cross. Boy, what a nose on that one! 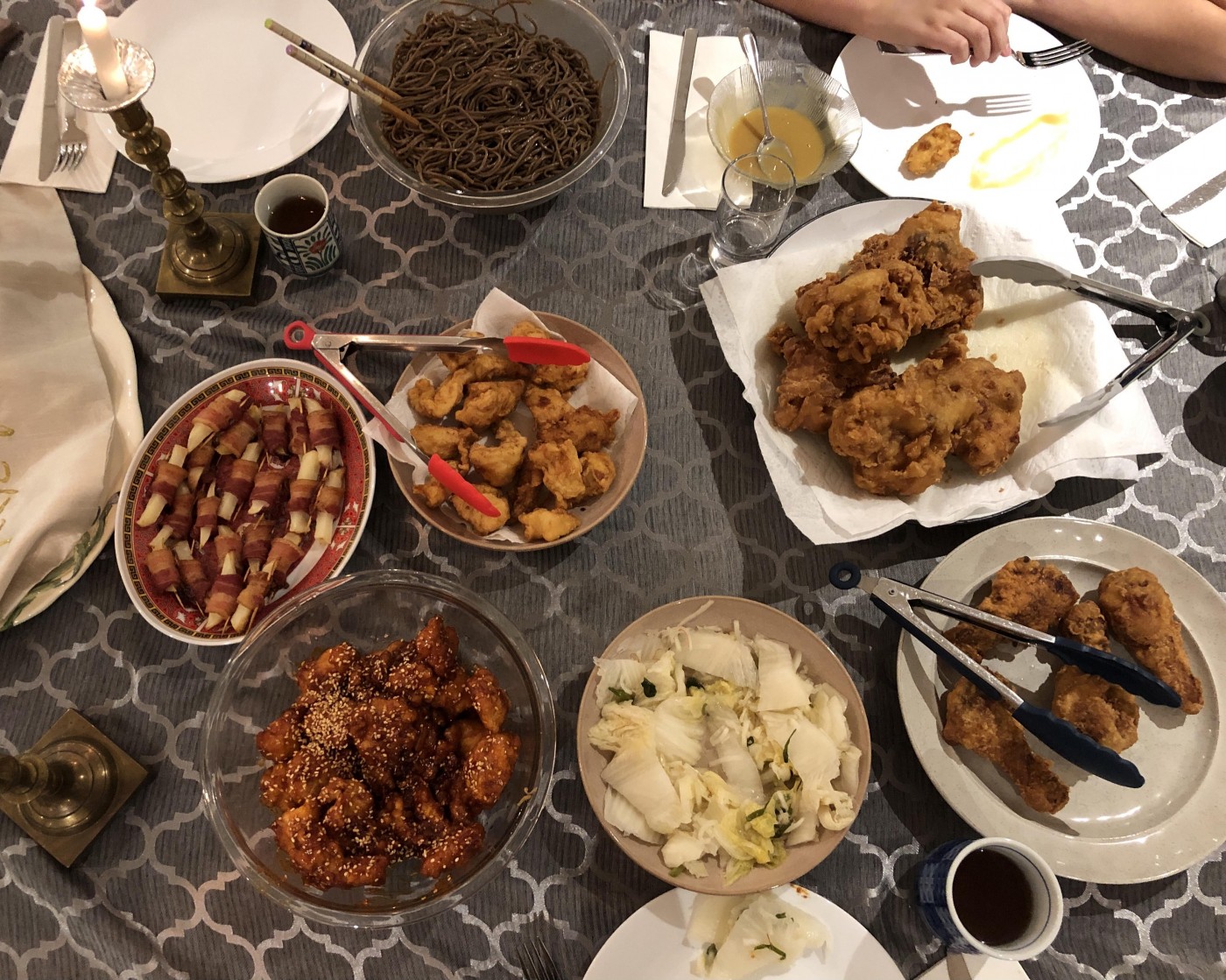 @Nozinan We went to the Walker's factory a few years ago. Bought a big bag of shortbread seconds (broken, chipped). Had them in the car and couldn't stop eating them. Also bought a Dundee cake that weighed about 5 lbs that came home in our luggage. Not one of your better diet plans.

@TracerBullet Those butter tablets are making my teeth ache.

Lasagna done in the crock pot. I used a Montreal Smoked Meat based Bolognese for the sauce, and Pecorino, Jalapeno Monterey Jack, and Cottage Cheese, served with freshly grated Pecorino...

6 months ago 6Who liked this? @YakLord I just had breakfast and I’m thinking that would be awfully good for dinner tonight. I like the way you chucked a good handful of Pecorino on top.

@BlueNote - the Pecorino is so much cheaper than Parmesan or Romano, and just as tasty...

@Nozinan that spread looks killer, I wish frying didn't leave such a lingering scent, perhaps it's best since otherwise I'd be tempted to do it often. Is the kimchi homemade?

@YakLord nice lasagna, I've always been curious but never attempted one in a crock-pot. I love pecorino, some types have a slight farmy funk which I like.

@cricklewood the kimchi was purchased from a Korean grocery store. It’s only recently we’ve found “white kimchi”. I used to ask for it at restaurants and people thought I was crazy...

@Nozinan I've not seen it served in many places. The only commercial version I found locally is made by some hipster company that takes too many liberties in it's interpretations of certain foods...perhaps I'll make some soon.

@Nozinan You guys should live in my head - blocks from Koreatown. I've always wanted to make my own kimchi

Kimchi was historically all about preserving vegetables for food during the harsh Korean winter, when food was extremely scarce, and starvation was a large possibility. Traditional winter kimchi was buried in the ground for months. When I lived in Seoul 38-40 years ago my Korean housekeeper used to tell me that it was customary to put baby shrimp heads in the winter kimchi. I've never had any kimchi with fermented baby shrimp heads.

The typical summer kimchi can be made in a day. Huge kimchi pots were a common sight on people's high rise apartment balconies when I lived there--DIY cultural comfort food for those transplanted to the big city from the countryside and devoted to traditional ways.

As an Army dentist I had occasion to treat some KATUSAS (Korean Augmentation(s) To The US Army). It was fascinating to see the effects of diet on people's oral and general health. At that time there was almost no sucrose in the Korean diet. Emergency dental problems for the young healthy KATUSAS were typically from impacted third molars and broken teeth from pebbles being in the rice they had been eating. In those days I saw almost zero tooth decay in the young Korean soldiers.

Interestingly, when I taught English to several Korean young adults in their 20s, it was not uncommon for these otherwise very healthy young adults to have serious gastric problems. THAT I also attribute to the diet, and in particular an excess of very peppery hot GI irritating food, most often kimchi.

6 months ago 6Who liked this?