Average score from 3 reviews and 3 ratings 88 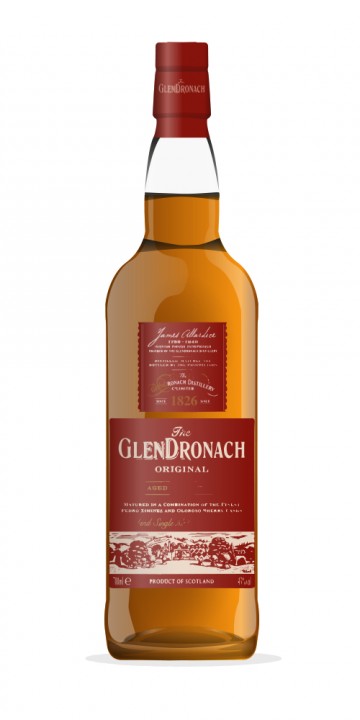 This third batch of the GlenDronach Cask Strength (no age statement) is also a vatting of oloroso and PX sherry casks. Let us give that a go. The previous two batches were quite to my liking. Batch 4 will arrive soon.

A creamy nose with mostly nuts and butterscotch. Loads of vanilla, but surprisingly little fruit. I do get some sultanas and coconut. Blood oranges in the background. Nice hint of tobacco as well. Candied ginger. I quite like this.

It is creamy on the palate and immediately very spicy: ginger, pepper, cloves and a hint of cinnamon. The nuts return, drenched in mild chocolate. Oranges become very big all of a sudden. A little zesty. Sweet and smooth honey. The oak speaks as well and makes it somewhat drying.

The finish is surprisingly long, dry and spicy. Very spicy!

The best of the three batches so far, without a doubt. Seen last for 59 EUR.

No age statement whiskies are rare from Glendronach, this one is well matured in a combination of Olorosso and Pedro Ximinez casks

This is a beauty, more than worthy of my 100th review. Sensational

Nose: Coconut oil, rum cake, bitter almond (“cyanide”).
All “thin high notes" at first… But later some white chocolate thickness comes out of the coconut, and lower-pitch nectarine (slight pineapple?) starts to prop these up a little.

Palate: Thin and spirity bitter-almond and rum-like juices, with coconut and slight light fruits (banana/apricot/pineapple) appearing out of the almond nuttiness. With time those fruits are more obvious.

Finish: The thinness of the palate flavors is compensated by slightly thicker white chocolate sensation in the finish. Then young coconut in back, rum and bitter almond elsewhere. Later I notice a lingering sensation of spirity ice-mint.

Initially a letdown for me, from the fresh bottle. Mostly because the palate had too much burn and spice— it was too hot and specifically too seriously strong in clove. The nose also had too much spirity burn, without enough supporting character. And the finish was just too drying.

But a few months older, with 2/3 bottle remaining, the malt much better, for my tastes. The clove is near absent, and I don’t get hot “spice” any more (although hot pepper burns if I hold bigger sip in mouth a very long time). And now this nice white chocolate sensation appears in the nose and finish. At some point I had concluded that it was best diluted to 44%, which brought out some richness at the expense of youthful character. With the oxidized bottle, it is better than that when neat (picking up maybe 4 points), and I only add a few drops of water.

Comparisons? Tough... (when isn't it?). I haven’t had so many malts that remind me of the CS3's rum-like character. Certainly expressions like Glenfiddich’s 21yo Caribbean and Balvenie’s 14yo Caribbean come closest, with a certain freshness and light nuttiness— but the CS3 adds good coconut sensation. Somehow, this Glendronach strikes me (now, having breathed) like Glenmorangie’s Nectar D’Or (despite different maturations). They are surely very different (the Nectar is fruitier and much less coconut/rum) but somehow their light style (nectarine/pineapple) makes me think they would attract the same fan base. It's not a great comparison though, and probably it is actually Glenmorangie's Astar expression that is more similar (also the ABV). Otherwise, I find some connection with Glenfarclas’ recent 18yo in travel retail (it is more lemony/nuttier, less coconut rum), and perhaps there is overlap with Arran’s recent Devil’s Punch Bowl Chapter III. The GlenDronach would be the winner for me, out of all these, but I would like to taste the ‘Fiddich again. You know, just to be sure….