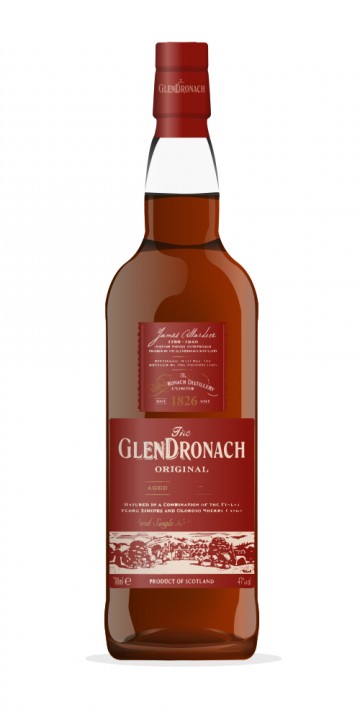 Thanks to my local store having another tasting i got to taste the rather luxurious Grandeur. The flagship (or at least the most expensive) of the GlenDronach regular range. Released in small batches, this is batch 1.

Similar with my review of the 18 year old there is just nothing great about this whisky, I'm a big fan of GlenDronach, their robust heavily sherried style really works for me. However this expression just isn't the Glendronach that knocks my socks off, and for over $800 dollars i would expect my socks to be troubled.

Nose: One associates many things with the word 'Grandeur', and quite a few of them are to be found here on the nose: Polished wood for instance, stale air, a damp tobacco pouch, and the accompanying faint smoke from a previous lighting of the pipe. Despite this outwardly rounded demeanour, there is no shortage of younger and more sprightly notes, such as raisins and honey roasted peanuts, sugared butter and fried courgettes, and a tangy layer of treacle and marmalade. A sumptuous nose that does not belie its title.

Taste: The palate is initially less "stuffy" than the more outwardly pompous nose, there is a sweeter approach in the shape of rock candy and very sweet latte coffee. There is even a note of orange flan topped with cocktail cherries. This appears to be the quirkier side of grandeur, but the class is still apparent.

Finish: Now we're really starting to indulge..Dime bars and macadamia nut brittles, flapjacks and sherry-soaked ginger. This big softie heart is nonetheless guarded by a deceptive hint of smoke, the familiar tobacco from the nose, and some mineral infused oak. However just when an air of grandeur seems to have been restored, we're caught off-guard by a final jig of sweet wasabi. Noble eccentricity at its best.

Balance: Having tasted some of the newer and younger expressions coming out of this distillery, as well as some of the exceptional 1990's single cask bottlings that have been released recently, one can't help thinking that the new generation of Glendronachs may end up bathing in a greater glory than this previous generation before them. That said, this grand old dram has plenty of life still in it, and a charming character that you can't help but warm to, as long as you can spare the time to indulge it.

So, we come to the end of our Glendronach time, and saving the best for last, so to speak. This one was specially selected by Master Distiller Billy Walker from some of the oldest and most unique Oloroso casks at GlenDronach. Only 1013 bottles were made, and bottled at Cask strength. I was really looking forward to trying that, and measure how it compares to the younger expressions reviewed so far. So, let’s find out how this one compares to them, Shall we?

Colour: Dark mahogany Nose: Oh my. That’s beautiful sherry maturation for you. Starting with sweet dried fruit compote , luscious prunes and dates and none of the balsamic one could expect from a long sherry maturation. Quite fresh , for a 31-year-old. Ample wood but not exaggerated , combining well with Demerara sugar and a pinch of cinnamon In a word : perfect. Palate: Thick viscous stuff almost chewable. Sweet entry on the dried fruit followed by roasted coffee, cocoa beans , some faint smoky note on the background Finish : Bitter espresso , crushed coffee beans.

well-balanced and not too woody for its age. Great nose , even better than the palate.