Average score from 5 reviews and 9 ratings 84 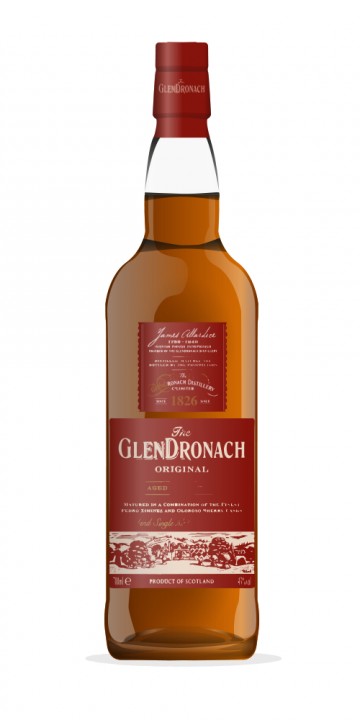 My earlier tasting of the Octarine took place in poor conditions (hot, outdoors, single dram) and my experience with malts was much more limited— for example, I had not tasted, or heard of, Glendronach before that. I decided it was time to revisit this one after hunggar’s recent review, so I return to this malt now armed with a full bottle (well, not anymore…).

Nose: The overall impression is of grape skin, salty shortbread, and apricot / raw pumpkin. It is complex and full, and it opens up nicely after some time. The first breath gives grape-skins (tannic/floral/grassy/leathery) and vanilla’d-marzipan. (I’d earlier written raw coconut milk and apricot, and I still think these apply). A second slow breath (or built-up vapors, or a warmed dram) is more vegetal: salted butter, melted on a raw pumpkin slice with coriander seed.

Palate: Syrupy caramel/vegetal/grape entrance, with a good dose of oak building. The lasting impression is a sweet and savory development: raisiny, to apricot + savory spices, to a white pepper peak, and then more sweet vegetal: grapes and apricot/ pumpkin-flesh again.

Finish: Grape skins and vague caramel are forward; less white pepper, but that pumpkiny sensation remains and fades in the back.

I know that I can be turned off when I read “vegetal” in other reviews, but we’re not talking broccoli here, but rather a pleasant pumpkin flesh, similar to apricot. Similar but different from that of the Jura 10; it works really well here and is smoothed over by sweet-and-salty accents. I could also think of persimmons with olive oil, or stewed salty watermelon. I get more tempered oakiness rather than “huge spices”, except for that peaking of white pepper. The nose is lovely, especially after opening up. Compared with my earlier tasting, I would say I can still understand my earlier perspective, but the leather/citrus/salt are now much less apparent; perhaps these had been brought out by the heat. Instead, I find this fruitier and even smoother than I remembered.

Overall, the Octarine is rather good and interesting: smooth and full of character. It is worth trying as a somewhat exotic any-day dram (certainly at its previous price before being discontinued). I would say I can’t fall in love with it because it is not my favorite flavor set, but I have to admit that it is exceptionally smooth for an 8yo, and the bottle keeps calling to me. The fresh bottle was closed, but each time I return, it seems more well-rounded and enjoyable. In the end, I was not disappointed that I'd picked up a bottle, so this gets a pretty high mark for me, above average. I think its character will be especially well suited to early autumn.

Compared with the 12yo, this is less cereal/hay and more grape/pumpkin. I prefer the Octarine, because it seems (strangely) less young and hay/grassy, and the vegetal tones seem more palatable.
The closest non-Glendronach malt, for me, is Glenfarclas’ 10yo: the same salted butter and grape tones, along with a savory background and interesting spices. The Oban 14 is really different, but I could imagine attracting the same people. For a less vegetal and more apple-y experience, I would direct you to the Arran 10yo. I could also recommend Old Pulteneys (12/17/21) as a good connection to other interesting, spicy, and briny malts; however, those again exhibit a very different set of fruit flavors. There is furthermore a range of “double cask” or “triple cask” expressions I could connect to, mentioned in my last review of the Auchentoshan Three Wood.

Glad to see that your opinion of this has improved! "Exotic every day dram" fits this stuff perfectly. It's understandably not to everyone's liking. But for a budget malt there isn't much youngness and there's a lot of flavour and complexity. Great review! Really gotta find a bottle of 'Farclas 10 now...

It’s a shame I’m only now getting to know this whisky now after it’s already been pulled. Luckily there are still a few bottles here in Taipei left to be snatched up. With one open and another stored for a rainy day, I’m questioning whether that will be enough. I don’t think I’ve ever enjoyed an 8 yr old quite as much as I do this one. And for a similar price, I can’t think of any other single malt out there that offers up this much complexity and personality. The reviewed bottle has been open for six weeks and is ¾ full.

This is something of an enigma for me. Based on the tasting notes you’d think this would be a very heavy, intense dram. Not quite. While it’s as rich and complex as the darkest, most brooding sherry monster, it’s considerably more light and casual. This is a completely different animal than the rest of the ‘dronach lineup. While I suspect there’s a good deal of whisky in here that’s older than 8 years, it’s still young, fresh, and clean. Also, the bourbon maturation hasn’t been completely eclipsed by the sherry influence, lending some lighter, brighter notes to the whisky.

The balance and complexity of this 8 yr old is really quite amazing. There’s a rich, complex sherry that is neither brooding nor imposing. There are light, bright bourbon notes that seem to pop up from time to time and lift the mood. Further lifting the mood is a youthful vibrancy and pep, with serious spices worked in that never get hot or rough. Somehow all of these things converge quite effortlessly. The result is my favorite Glendronach, as well as one of the most balanced and drinkable 8 yr olds I’ve ever had. This is definitely an oddball, but that’s what makes it great.

Thanks for the tantalizing review. Now I suspect I was given a poor sample under poor conditions, at the tasting I attended. I will certainly try to scour for a new one, if possible.

Regarding young and inexpensive malts that manage to be complex: have you tried Glenfarclas' 10yo? And could you compare it to this?

I haven't had the chance to try it yet. I'm a big fan of the 12, but I haven't seen the 10 around much here in Taipei. I'll be sure to grab it if I do come across it though. Inexpensive and complex is always a good thing!

Nose: Right after pouring it is distinctly leather; then I notice a slight haze of seawater spray, rounded out by faint coconut milk. After some time, this develops into vanilla or apricot.

Palate: The first taste was sharply buttery, surprisingly like movie popcorn, reinforced by saltiness of a serious gratin. This sensation above lighter notes of wood and mixed fruits.

Finish: Light finish of the same character as the palate, plus some orange rind.

Frankly I did not get the chocolatey character others have described, nor a great deal of fruitiness. But I do agree that this is a quality dram, soothing and not too bitter.

This one comes from a mix of Bourbon/Sherry casks , and is matured for 8 years. Available mostly in the French market, as it was originally supposed to be sold only in the French “Carrefour” supermarket chain, but it’s now also distributed in other parts of Europe (Germany,Benelux) and some online shops as well. An interesting young Glendronach, to start the week with, right?

Nose : Starting fruity (think of Apricots/peaches) , continues on malty sweetness , some citrus , fresh that what comes to mind here. Hints of honey and wood. Some smokiness also, which is quite surprising on this one. sort of sweet BBQ kind of smoke, but not too much.

Palate : fruit on the entry, with potent wood and vanilla, for it’s young age, chocolate, and malt.

Finish: Medium wood malt and sweet barley. then getting spicy and bitter . Lovely.

I will look out for this one, you describe it nicely and it looks very good.

@HansBlumenberg do that, and let me know how you liked it ;)

This limited edition GlenDronach Octarine (“the colour of magic”) was developed in May 2010, exclusively for the Carrefour supermarkets in France. As often with these “exclusive” releases, they turned up in other stores afterwards.

It is a vatting of bourbon and sherry casks, said to be 8 years old although there’s no age statement on the label.

Nose: starts on marzipan / walnuts with some citrus notes and apricot compote, but quickly loses a lot of its freshness and moves to roasted almonds and old roses. Interesting smokiness which seems to mute the fruits. Some milk chocolate. A little mineral as well (limestone).

Mouth: starts a little shy, with mixed fruits (apple, orange) and evolving to big notes of butter toffee and caramel. Some vanilla. Overall quite coating, with a creamy chocolate body.

This Octarine is quite different from what we see in the core range or the GlenDronach single casks. I may not be the biggest fan, but in this price range it’s very authentic.