Average score from 3 reviews and 3 ratings 83 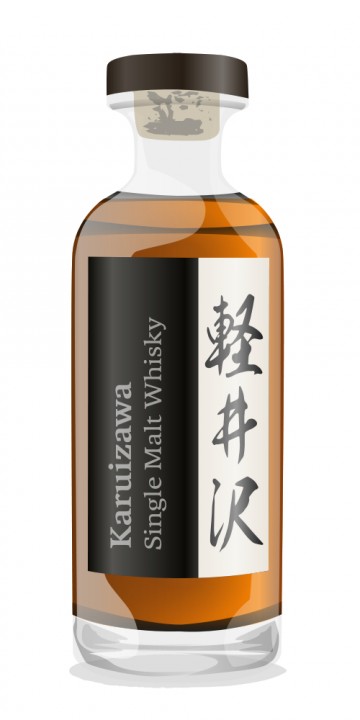 Merry Christmas and Happy Holidays! I'll be closing my evening with an extremely rare treat - three Karuizawas. One is rare enough, two impossible...but three basically turns me into a giant douchebag.

Originally a winery, Karuizawa converted to whisky in the 1950s. Being the smallest whisky distillery in Japan, it focused solely on malt matured in ex-sherry casks. Similar to Macallan, the stills were rather small and often used Golden Promise barley. It was owned by Kirin, mothballed in 2000 and finally closed in 2011. Of course, it is extremely hard to find and commands very high prices at auction, which is virtually the only place you are going to find these bottles. Most Karuizawas (but not this one) are single cask, cask strength independent bottlings. For many, they are serious investments and the most collectible of Japanese whiskies.

The vast majority of investment grade whiskies has always been, and still is, single malt scotches. However, Karuizawa malts have climbed up the flagpole of collectible malts, having now replaced Ardbeg as the third strongest distillery to invest in, behind Bowmore and Macallan (according to the Whisky Magazine Index). The only other non-Scottish distillery in the Top 25 is Van Winkle.

The Asama is a combination of malts distilled in 1999 and 2000, and was bottled in 2012. I received this sample quite some time ago, if memory serves it came to me from Johanne McInnis ("Whiskylassie"). To give you a sense of its collectibility, this bottle sold at auction in Hong Kong, in November, for $CDN695.

The colour is a rich gold. On the nose we have rich dark fruits, rum-raisin, salted dark chocolate and raspberries. Smoked paprika. Sage and rosemary. Wet forest floor. Very savoury - I almost get steak with mushrooms! Slightly sulphurous, but that just seems to add to the richness and complexity. Becomes smoky with water. Rich and elegant.

Remains fairly savoury on the palate, but some brown sugar adds the right sweetness. Dark honey, chocolate orange, mint and a bit of barbecue smoke winding through. Old leather. Ginger. Mincemeat pie. Delicious but a bit too tannic, though that quality is eliminated with a few drops of water, adding spice and balance.

The finish is a little fuzzy but features more orange, herbs and, believe it or not, smoked ham. Enormously rich and complex, but there is a sulphury off-note that I'm not crazy about. Regardless, a robust and rewarding malt. Even at $700 it is still one of the most affordable Karuizawas around, so if you can afford it, get it.

Karuizawa distillery was established in 1955 by the Mercian Wine Company. Mercian owned a former vineyard and decided to convert this into a small traditional distillery. Apparently the location at Karuizawa was chosen due to offering the closest climatic conditions to the Highlands of Scotland, even though the summers are much hotter and the winters much colder at their peaks than in Scotland. Production started in 1956. In the beginning most of the whisky produced was put into simple blends that were cheap and popular, and the first single malt was released only in 1976. Mercian stopped distilling at Karuizawa in 2001 and in 2007 sold the distillery to the Kirin Brewery Company. Unfortunately, Kirin never showed much interest in investing in the brand and shut the distillery down in 2011. In the same year the entire remaining inventory of the Karuizawa distillery was bought by Number One Drinks and moved to Ichiro Akuto’s Chichibu distillery. This is the third ‘Asama’ bottling, a vatting of casks from the distillery’s final vintages of 1999 and 2000 after having been married for a period of over 12 months. It was released in September 2013.

The nose has light flavours of rubber, orange peel, liquorice, and touches of apricot – all in all rather bland. I was willing to give it time and also experimented with water, alas to no effect.

The palate is medium-bodied and lightly peppery. Apricots and pears appear but ever so lightly. Towards the end the whole gets more and more oaky, followed by a strange metallic element.

The finish is peppery and rubbery (in an awkward way), and ends in a distinct metallic aftertaste that is rather unpleasant.

I am afraid that I would consider this a Karuizawa bottling not to be recommended. A bland nose, followed by a reasonably decent palate, but culminating in an unpleasant finish – this is not what you would want to spend your money on.

Nose: Fudge, and maybe a little chocolate and toffee, and kirsch. A little wood and something like a damp green forest. Vinuous, though somewhat earthy and savory - not the sulphur/salted meats. Surprisingly dark and rich for a whisky this young. Rather malty.

Palate: Really nice texture and thickness. Brown sugar stew and honey, which give way to more fudge with flecks of chocolate. Wood, ginger, mellow orange zest are secondary. Bitter and sour, turning into something very nice, topped off with some herbs and twigs.

Finish: This is really something. Fudgy, a little extracted fruit. This is not a powerhouse Karuizawa, but it's really just very well composed and very solid.