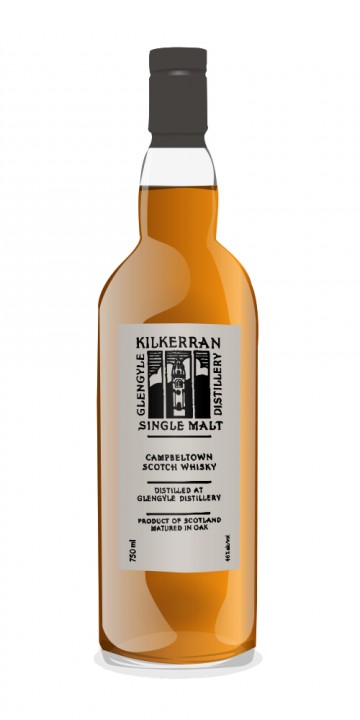 Kilkerran is a work in progress, meaning it is not yet ready for its grand release as a single malt. It is a single malt already, of course, for it is already 10 years old. This release, with a rather ugly pink label on the bottle, arrives in both a bourbon and sherry matured variety. I will put them head-to-head, ending with the Sherry Wood.

The nose is sweet, dark and mysterious. The peat is completely drowned out by the sweet sherry, coming in the shape of strawberries, water melon, roasted nuts and raspberries. The spices present are cinnamon and liquorice, but they play second fiddle. It seems to be mildly perfumy. But not disturbingly so.

It is oily and spicy on the palate with obvious sherry influences such as nuts, rhubarb, chocolate and even some tobacco. The peat now becomes a bit more powerful. It is a bit piquant on pepper and liquorice. Hint of espresso. Midpalate it turns to fruit with the emphasis on dried exotic fruits, which I can appreciate. Mango? Papaya? Agrum? I had these in the bourbon matured version as well. Must be the spirit, then.

The finish is medium long with the espresso returning. Nice development of smoke as well. Good.

I find this version slightly less good than the bourbon matured cousin. Both bottles can be bought for less than 50 EUR, so they are worth a try.

Glengyle Distillery, where Kilkerran is distilled, opened it's doors in 2004 and is the newest distillery in Campbeltown. It is also fast becoming my favorite from the region, too, given the quality of the spirit that leaves through it's doors.

What is nice was every year after the third (when it legally qualified to be called whisky) Glengyle release a sherry and a bourbon matured expression entitled Work In Progress. So the WIP 1 was a four year old spirit released in 2009.

Now I know this is done purely for commercial reasons but when the spirit works so well and has been so expertly crafted it then becomes a pleasure to be actually part of that journey.

The WIP 6 marks ten years of the distillery's operations which means this years' release has some decade old spirit in it.

Matured in European sherry and bottled at 46%.

Nose: That briny coastal sea salt which can be found in the bourbon wood expression is present here as well. Herbs. Earthy mild peat. Cigar leaf. Pecan nuts glazed in sugar. Light soy sauce. Red wild berries. It's a comforting red sherry that I like.

I know it's a personal choice but do you generally enjoy the sherry to the bourbon releases?

@tjb Not as a rule, no. In this instance yes. I preferred the bourbon cask of the WIP4 incidentally. So that's that...