Average score from 7 reviews and 8 ratings 82 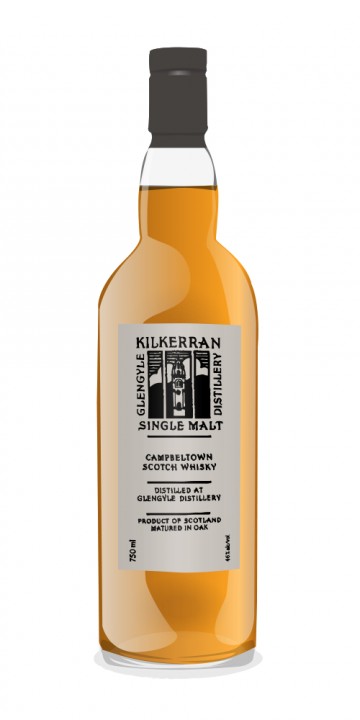 Kilkerran is the single malt brought to market by the Glengyle distillery on Campbeltown (as the Glengyle name is already used by a company that offers a Highland blend). Their series Work in Progress already has a 10 Year Old, both on bourbon and sherry casks. I will try the previous edition on sherry, released in 2013. So this is 9 years old.

The nose is dark and sweet with a dirty edge. Think strawberries and watermelon, but also roasted nuts and raspberries. Liquorice and cinnamon. But also loads of earthy notes. That makes it dirty in my book. Anyway, this is a very good nose indeed.

It is oily on the palate. Good mouthfeel. Rhubarb and nuts, but also chocolate and tobacco. With a clear hint of peat. Midpalate it turns almost exotic. Think mango and papaya. More peat than expected. Hint of espresso. Very good.

The finish is quite smoky and long on espresso.

Surprisingly complex whisky for such a young age and better than the 10 Year Old, in my opinion. Between 40 and 50 EUR, which is very fair.

Mark, have you had the chance to try the wip 7 sherry wood ?

When I saw Serge V's review of this little beastie, I went out and snagged a bottle. Still have some left. Boy, was I disappointed upon first opening the bottle.

But after some time went by (as in the better part of a year), things looked up for the bedraggled bottle lurking in the back of my liquor cabinet.

Upon first opening the bottle:

Nose: The kind of wet mossy reek that signals an immature spirit that is harboring a malignant form of alcohol so as to affright the sense of taste later on. This followed by sweaty tube socks, wet pumice, old apple juice, cranberry sauce, festering tubers in a root cellar, and a slight Springbank 10 year constitution, but younger and less polished.

Mouth: Lime (not the fruit, the powder used to bury the dead), cheap tequila, lime rinds (the fruit), flat Chivas, witch hazel, a nice oaky trajectory that blends into a rather surprising finish that evokes old leather and dusty libraries (two things I love actually, especially together, as in old couches and old books).

After nine months of sitting in a half empty bottle:

Nose: What happened to the filth? What happened to the sweaty tube socks? All gone. The spirit is quite nice now. Reminding one of a quaint old highland scotch from the 80's, nutmeg, ginger, old leather coming through, old Time magazines from thirty years earlier, pencil lead, musty clothes, caramel on melted vanilla ice cream.

Finish: More of the same in a way that lingers in a very pleasant fade.

"The High": This is the best part. This whisky really delivers a happy, mellowing, friendly buzz that makes one's outlook feel fuzzy and optimistic. This differs significantly from most modern overly sweet Speyside whiskies that I find to be a "downer buzz" that starts with a peaked spike not unlike bad acidic coffee and then goes downhill from there.

This Kilkerran is a late bloomer. Open it, drink only what you must to get some air in the bottle, forget about it, then rediscover its waylaid charms. And, no, giving it a lot of time in the glass when it is young does not work. I tried that. Over and over again. No dice. As for hyperoxygenating it in a smaller bottle with lots of air, I tried that too. No dice on that either. None of the old tricks work on this one. It just needs time to acquire the air of an older spirit, which is why it just works as a whisky.

Yes, it's safe to say this is "retro" de-evolution in a favorable backwards direction. Duty now for the past? Devo, eat your heart out.

This is the bourbon wood, not the sherry

Well, now I wish I hadn't slurped mine down so quickly last year.

Kilkerran (formerly known as Glen Gyle) was founded in 2004 (thanks to funding from Springbank) after it had been closed since 1925. This work in progress malt was matured in a Sherry cask for 9 years

its a really interesting malt but it isnt quite finished yet,its still a bit too nippy and the finish doesnt have the impact of the nose or the pallet. Right idea but its still a bit early. Not bad

Have you tasted the bourbon cask, Volks? Serge rated that one a 91 and heaped lavish praise upon it in his No Awards last December.

@volks: I like your reviews and trust your point of view, by the way. Usu. I'm within a point of your scores in terms of my own taste.

I suspect the bourbon wood is good, but not a 91. Maybe an 89 or something like that. Just a guess. Serge's taste tends to gravitate towards whiskies that remind him of very old expensive bottles. He has tasted some very old and very expensive bottles in his day and they have influenced his palate. He likes whiskies that tasted like they were bottled decades and decades ago. I find his eccentricities to be quite interesting and in many ways his taste is incomparable. Many reviewers forget that there are bottles with quite "young" whisky inside that were bottled fifty years ago. A seven year from 1962, etc. etc. I think the WIP bourbon wood may be like that. . . .

I have to wonder if there is batch variance in the bourbon wood. Serge at Whisky Fun loved his bottle so very much. Based upon hearsay, it seems that either some folks really have different strokes on this one, or there is some fairly significant batch variance . . . or, gods forbid, Serge got his hands on a special bottle that (unbeknownst to him) was far better than average for the bourbon wood WIP 5. Who knows? I have an unopened bottle and I'm wondering when to try it. There have been worse conundrums to ponder ;)

First I gave it a much lower score but after a while in the nosing glass and addition of water, it got way better.

Reminded me of the movie Youngblood, where a promising hockey player starts to fight back against all odds. Sherry finish and a young spirit – didn't sound good in my book and didn't start well but Kilkerran WIP 5 Sherry Wood did fight back.

Taste: Nutty and sweet at first, then becomes bitter. Dark chocolate and dried fruits. Wee sweet. After one drop of water and some time, the taste gets way better and smoother with nice smoke buried deep.

Finish: Lingering with dry oak and some sweetness.

Balance: Shows its young age especially in the nose. Let it stay in the glass quite a while to get the sharpness away and get some richness. My score got better after a while.

There's few posts online about the Kilkerran WIP 5th Sherry Wood and Bourbon Wood. Here's one of them by Malt Fascination: maltfascination.com/2013/10/…

I'm a big fan of the Kilkerran Work In Progress series. These are remarkably robust expressions belying their fairly young(ish) age. This one has been matured in Sherry Wood and given that it's the 5th installment in the series should make it any where between 8 and 9 years old. I say should. I don't really know for sure.

It has a crispy fresh nose. There's fruity musk with lots of chocolate orange, boiled almonds and a perky pink melon. There is also that mildly tart sour dough quality to the proceedings as well. Quite a clean and arresting bouquet.

The palate is quite silky and traverses your mouth coating it in lemony sugarcane and chocolate covered dates. The grated ginger on top adds that much needed layer of complexity.

Decent finish with torn green herbs sprinkled with lemon and a dash of something bitter.

Thank you Campbeltown. Now this is what I'm talking about!

Unfortunately there are not many distilleries left in Campbeltown but the ones that are there produce such a variety of different whisky characteristics and styles that it almost compensates for the lack of individual distilleries. Of course Springbank is the dominant distillery of the region, (Springbank, Hazelburn, Longrow) and then it has its 'sister' distillery Glengyle which is kind of anchored to the main Springbank campus. This is where Kilkerran is produced - I'm not actually sure if it is a full autonomous distillery in its own right of if Springbank control it. And of course let's not Glen Scotia - a distillery I have hardly ever tried but think I will investigate in the not too distant future.

This is a NAS Kilkerran and judging by its name 'Work in Progress' I think this is not intended to be the finished product, (let's think along the lines of Ardbeg Very Young, Still Young etc). General word of mouth though is that this is 8-9 years old.

Nose - Quite a sharp tangy peatiness but underlying that is a touch of rubberiness that I'm not keen on. It is OK, but you can tell it's a young malt. Mellows a bit to red fruits after time and becomes a bit more pleasant.

Finish - Slightly sweet. Then drying. Medium in length and quite prickly.

Difficult to summarise and score really - I didn't like the nose too much but the palate and finish were excellent, especially when accounting for the youthfulness of this. At £30, it is also decent on the price/quality ratio. Interested to see what happens to this in the next few years.

This is Kilkerran - the distillery should be displayed in the title but is not available in the drop down list.

Nose: Light, vanilla, bananas, some peat Palate: Light but rough around the edges, cloves, vanilla, tropical fruits, touches of peat and licorice Finish: Makes the mouth water, peat, banana skins, a lot of alcohol Comments: I love the idea of this. You can really taste where this whisky is going, but it is not quite there yet. It’s got a little too much heat and alcohol. A little more time in the barrel is going to make this a great whisky. If you get a chance, you should try this. It is great for your whiskey education. I’m hoping they are holding back a few bottles of this each year so we can do side-by-side tastings when the 12yo drops seven years from now. Rating: Average/Must Try For Whisky Nerds