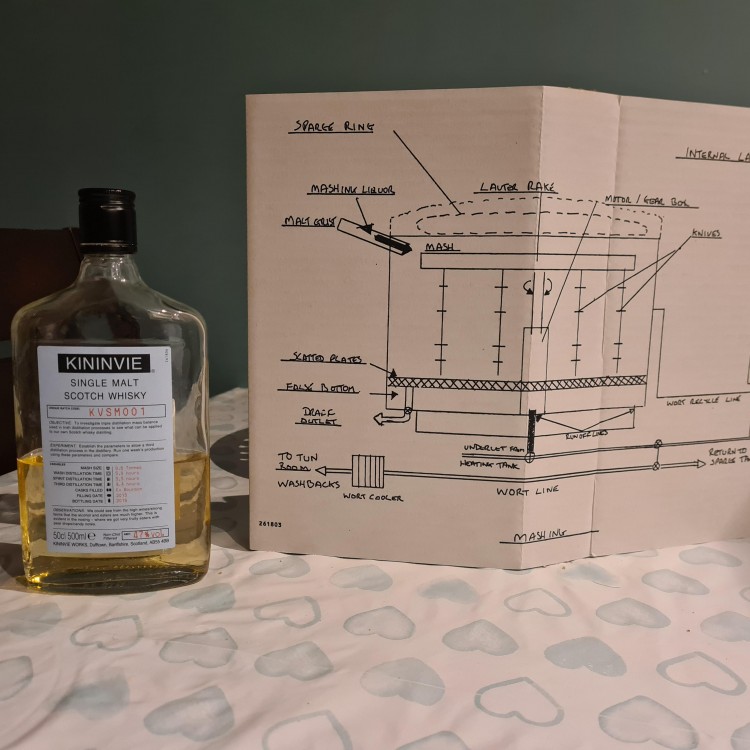 I used to work in a foundry. In the stores. One of the products we kept was Acetone in drums. I was talking to the delivery driver once and he was shocked we stored it inside. Said we were crazy. He said once a barrel at another place he delivered to had set alight and killed a guy. Burned so hot they didn't even find his teeth.

He may have been talking nonsense. But the internet wasn't such a big thing at the time and we had no way of verifying his story. Scared us so much we moved it outside.

Anyway onto this single malt. It was kind of reviewed by Ralfy. He opened a bottle but wouldn't give it a score. Said it was not readily available. He indicated he liked it though and I managed to grab a 50ml bottle from Amazon for £30.

Kininvie is a pretty new distillery. Founded in 1990. Doesn't produce a huge amount of whisky. They seem a bit hipstery to me. At the same time as they released this they also released a blend and a single grain whisky.

The packaging is really unique. It comes in a kind of cardboard cutout with a diagram of a mash tun.

Acetone on the nose. Some wet straw. Golden grahams cereal.

Acetone again. But also boiled sweets and green apples. The arrival and development are fairly close together. The finish has some pepper and does take It's time a bit. It's not hugely complex. But is pleasant enough. Doesn't require water.

Still a pleasant enough summer dram (you wouldn't want to drink this on a cold winter's day) and another distillery ticked off the list.

@Wierdo The operative word in your review being "Hipster".

@Wierdo I'm guessing you meant a 500ml bottle? If not that's a mighty expensive miniature.

@Wierdo I did a rare old whiskies tasting put on by Diageo. One of the biggest takeaways was that if the whisky smelled of acetone, throw it out. It is poisonous.

@Victor, what if it smells like the pus from a diabetic foot ulcer? As in Lambertus?

@Victor we have a boiled sweet in the UK called 'pear drops' that smell of acetone. This kind of tastes and smells a bit like Pear drops. But I didn't think my US and Canadian whisky buddies would get the reference! So I put Acetone instead.

@Nozinan Only you, in your capacity as both a medical practitioner and a whisky aficionado, would be able to do a head to head nosing with those two disparate items.

Sorry to hear this wasn't a great experience, although I'm glad to see one of these expressions reviewed by someone on the board to get a different view than the usual suspects. I have been curious about releases from Kininvie for some time although I may admit the story of this distillery is perhaps what attracted me. This experimental unit tucked behind Balvenie that doesn't have any of it's own mashing/fermentation equipment, that's now largely been replaced by the Ailsa Bay complex.

I guess the whisky you never get to taste is the most seductive, perhaps we should keep it at that.