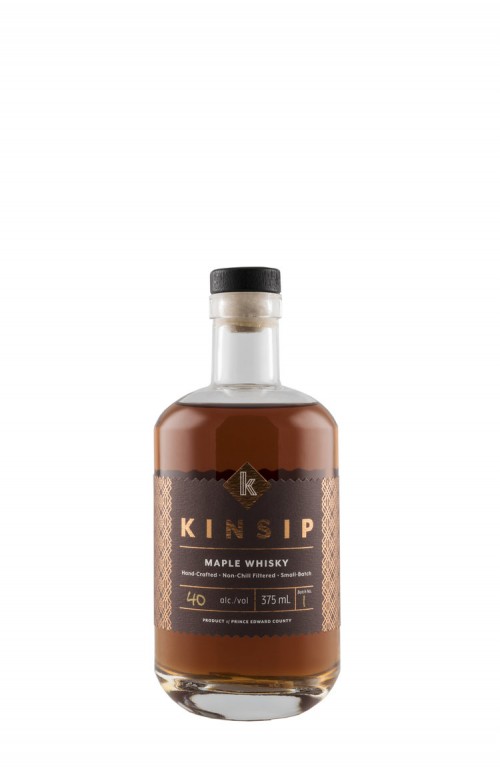 Kinsip House of Fine Spirits (formerly known as 66 Gilead) is a charming micro distillery at a farm in Prince Edward County in Ontario. The farm was first established in the late 1800s, growing barley and hops. Besides various gins, vodkas, rum, a barrel aged shochu (which I quite like) and various bitters and other products, they make a couple of young whiskies. Some (but not all) of their products are in the LCBO, but it's well worth including them if you go for a bucolic weekend in The County. You can also join their club for an annual fee and they will ship you boxes of products twice a year, as well as other perks.

One of their products is a maple flavoured whisky. They explained to me how they make it when I visited, so hopefully I get this right: they buy locally-made good quality dark maple syrup and put it into white oak barrels for a while, then empty it and put in Ontario corn whisky that has been matured in charred barrels. The whisky is then dumped and then bottled, while the maple syrup is put back into those barrels for a "finishing", and then that syrup is also bottled and sold. The label includes a recipe for a Maple Old Fashioned (which I haven't tried yet).

The colour is a medium, um, maple syrup. Surprisingly, I don't get that much maple on the nose (unlike the other Canadian maple-flavoured whiskies I've tried). Young floral whisky with linoleum, freshly-sawn pine, some oak and dark caramel. A bit of wood smoke. The maple is there but in the background, dominated by the young corn. Water does nothing for the nose. Surprisingly subtle, though a bit simple.

Very hot on the palate, almost like it's cask strength (almost). A bit more maple here, again with the estery notes typical of very young whisky. Creamy mouthfeel. Some woody oak. Given how quiet the nose was, it's shocking the palate has such a big blast of spice and heat - but water helps tame it and bring out the maple flavours. Not bad, but just too young and raw.

The short-ish finish has more maple notes, with alcohol, pepper and a touch of oak. This is more interesting than successful - but much more interesting than Crown Royal Maple or most other flavoured whiskies. The raw alcohol notes add complexity, but balance is sacrificed. I think I will use this as a mixer with ginger ale, or try it an Old Fashioned and a Manhattan (which might end up being too sweet). Next we're going to try their Wild Oak Whisky.

@talexander It sounds hideous. Another silly Canadian maple cliche. Have you thought about trying it on pancakes with some nice melted butter?

@BlueNote I've thought about it, but since I have the maple syrup they used to make the whisky, I'll just use that instead!

@BlueNote, a Boxing Day tradition at my house - cook a pan-sized apple pancake - place on plate - dump two ounces of chosen whisky over pancake - add maple syrup - garnish with half a dozen slices of sizzling side bacon...enjoy!

@paddockjudge Is it Canadian whisky? CR Apple perhaps? And do you dump it or drizzle it so it goes over the whole things not just soaked into one area?

How do you flip it?