Average score from 3 reviews and 7 ratings 85 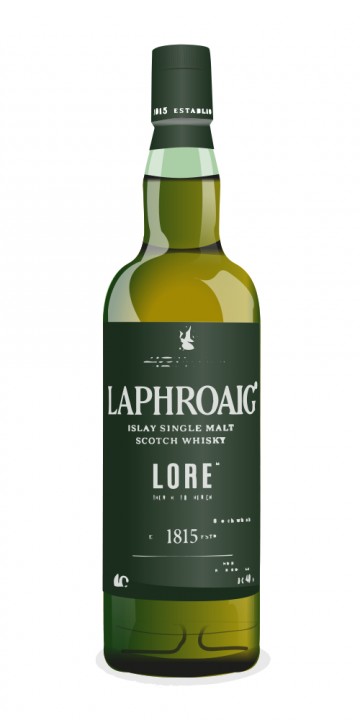 In September 2017 I set foot on Islay for the very first time. What a great trip indeed. We visited – obviously – all distilleries (even Ardnahoe, which is still being built), including Laphroaig. We had a very fun tour and at the end were given a couple of samples. One of those was this Laphroaig Lore, bottled at 48%. According to our tour guide, even casks from 1993 were used in the mix (although most were much younger).

The nose is sweet on apples, pears and pineapple wrapped in a smoky jacket, while the peat actually plays second fiddle. Having said that, make no mistake, this is Laffie with tar and ship’s rope on the nose.

It is oily, but also a bit moldy on the palate. The fruit is limited to apples and a hint of oranges, while the smoke increased significantly. A bit spicy from cloves and curry, woodsmoke and ashes. But it is quite flat… for a Laffie.

The finish is medium long, fairly sweet, but no longer fruity. Strange as it may seem, this reminds me of peaty sugar water.

Nice Laffie, but fairly straightforward. Not a lot of depth, making this NAS-release almost but not quite disappointing.

@markjedi1, is there a typo here you can correct for us?

Are you saying there was a known number of casks that went into this as a one-time creation? Seven? Eleven?

It looks typographically and grammatically correct to me.

Laphroaig Lore was released in 2016. According to distillery manager John Campbell, this is a vatting of whiskies that are between 7 and 21 years old. A variety of casks is used in producing Lore, among them first-fill sherry butts, quarter casks, and ex-bourbon barrels.

The nose starts with a load of brine, porridge and white pepper. Then smoke develops, of the "soft", campfire-like sort, and with hardly any phenolic notes. Later on there are vanilla and lemon flavours, followed by honey and a touch of orange peel.

The palate is medium-bodied and brings more brine and campfire smoke flavours. There now is a salty note, together with notes of vanilla and cinnamon and followed by a hint of liquorice.

The finish is sweet with flavours of liquorice and cinnamon, and the smoke has turned sooty, all ending on a slightly peppery note.

This is a rounded and rather well balanced Laphroaig without any rough edges. Considering that Laphroaig claims that Lore is their "richest expression ever", the flavours seem somewhat subdued. I do not dislike it but miss the individuality of the distillate.

@Pierre_W, thank you very much for your very informative review.

The consensus on Laphroaig Lore seems to be " good, but we don't like that it is relatively expensive and NAS". I surmise that you are more or less in agreement about those points. In what respect is "the individuality of the distillate" lacking in character in Laphroaig Lore? Are you saying that these are just less flavourful casks used than are used in most batches of Laphroaig? Given current market options would you ever prefer to buy a(nother) bottle of Laphroaig Lore over a bottle of Laphroaig 10 Cask Strength?

Good God! Have you Canadians been practicing these routines for years?

Nose: Smoke, ash and salt. Work at it and some light fruits come through (pear/grape) along with hints of cut grass and vanilla. Something else is there... sticky dates maybe.

Palate: Bonfire night. Very smoky with ash and iodine. A touch of aniseed and those lighter fruits are still there with lemon and vanilla.

Finish: Very long. The powerful smoke gives way to pepper for a pleasantly spicy feel. The aniseed is still detectable along with a touch of giner.

Balance: Pretty good. Consistent with the smoke and a great finish. This is a "mouthful" whisky.

If you're not a fan of smoky whisky then this is one to avoid, otherwise definitely worth a try.

This one seems to have gotten universally slammed just on spec ( NAS, etc.) as soon as it was publicized, but this sounds pretty good.

I think I heard at least once that this is supposed to fill the role of the discontinued 18 YO. How do you think it fared on that score? And how about the price—also comparable to the old 18 YO?

I can see myself really enjoying this Laphroaig but at that price I'm not that interested in trying!