Average score from 5 reviews and 12 ratings 91 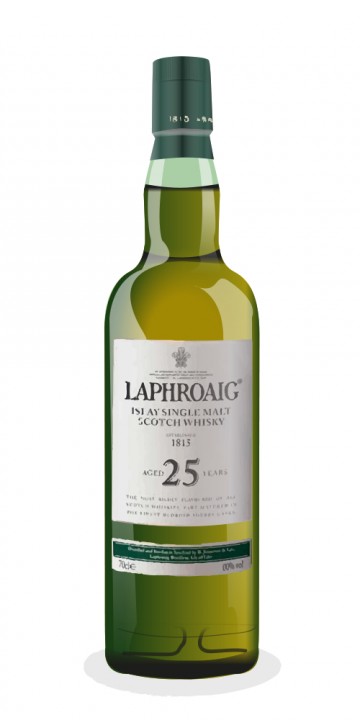 This is the first 25-year old Laphroaig, released in 2007. It was matured in both ex-bourbon barrels and second-fill ex-Oloroso sherry puncheons that were handpicked by master blender Robert Hicks.

The first thing I get on the nose is smoke - no surprise there - but rather subdued, followed by a good dose of vanilla and a hint of lemons. Then there are flavours of sherry and dark fruits such as prunes, figs and dates. Next, notes of cardboard and furniture polish develop. Overall, this is a well balanced and very enticing nose.

The palate is light-bodied, oily and lightly spicy. Vanilla flavours again come first, followed by caramel and wood spice. The peat is there, very well integrated and getting counterbalanced with sherry sweetness.

The finish is long and smoky. Seaweed is now the dominant flavour, together with cardboard.

This 25-year old is a very nice Laphroaig, for sure. I loved the nose that is really well balanced and nicely complex. The palate however would benefit a lot from a higher ABV - why this was bottled at only 40% beats me. Overall verdict: lovely nose and very well balanced but without much impact, especially on the palate.

Wow only 40? That surprises me. I guess they needed to stretch the supply.

@RianC, oh, for some of us ABV envy, or really more accurately desire, is definitely a thing. Show me a whisk(e)y bottled at 80% ABV and I want it! Yes, there are such monsters, though I've never tasted or seen one in person. Jim Murray reviewed a German-owned private cask bourbon which was bottled at 82.7% ABV. If he got to taste it, I want to too! The most I have in stock is 73.75% ABV. While that is a very righteous ABV, an ABV higher than the ABV of the highest ABV George T. Stagg, the human spirit always wants more.

The 2nd Nashville Whisky Festival began promptly at 6PM. I was first through the door, and eagerly sought out my first dram. The first table I encountered was Laphroaig, and that's where I found my "date" for the evening - Laphroaig 25, 2011. This is a bottle that I have been lusting after for some time, and I did indulge.

Nose is unmistakeably Laphroaig. It is briney and medicinal - not as intense as the younger whiskies, but moreso than the 18. Taste has some vanilla sweetness, but little wood. Very bright and vibrant. Zesty. Very full and rich in the mouth. Not drying in the least.

This was a very rich and comforting whisky, one that I kept coming back to through out the night.

I cannot justify paying that much more money for something I would only rate a few points higher than the other. I am glad I had the experience to sample these whiskies side by side.

@Onibubba: Went on sale in Oregon for only $140 on Monday. I would have had to drive to the beach (about 1.5 hours away) so I passed. What a deal though! I had gone to the beach a week earlier. Had I known the OLCC was going to put that bottle on sale, I would have planned my vacation around it! Of course, instead, I stocked up on even older bottles. Check out my collection. It's getting sick! The Lonachs are old, but the ABV's are too low. Still, they are fun to own. Hope you are happy and well these days, Onibubba. Take care, Rig.

I haven't sampled every batch yet, but I'm certainly making an effort to do so - seven different batches to date and haven't met one that was less than spectacular.

This whisky is an adventure. For those who are curious about Wiser's Legacy, keep an eye open for Dr. Don Livermore, his tasting sessions are an incredible source of education and enjoyment.

I'm generally a fan of anything Laphroaig and the distillery has never let me down in all these years, though, I've heard of a miscreant 15 year old that may taint an otherwise perfect track record. But let's cross that bridge when we get to it.

Right. The 25 year old 2011 Cask Strength. Possibly the most un-Laphroaig nose you will ever find. Which is not necessarily a bad thing. The iodine and peat is subdued; it's there but comes to you in gentle waves riding on a crest of sweet lemon citrus. The citrus is then enveloped in a fine spray of honey and sugarcane. This is possibly the most delicate of Laphroaig noses you will ever come across.

The lemon and honey are dominant on the palate but not before a burst of white pepper greets your tongue. The peat and smoke, as on the nose, play a supporting role as if to nudge you from time to time and let you know this is an Islay.

The finish is long, dry and spicy with a touch of oak and a smattering of nuts.

This is a lovely dram and does all the right things but the question remains; should Laphroaig be producing such delicate whiskies or focus on mouthfuls of iodine, peat and personality?

@indynoir I'm not sure which batch you tried. My review is on the 2011 bottle and at 48.6% the cask strength version. I thought it was quite special even if it didn't have all the classic Laphroaig flavors.

How does this compare with the 18 year? The 25 year is out of my budget range but the 18 is not. I think I tried the 18 one time but I can't remember for sure. If I did, then it didn't make much of an impression.

I think this is perhaps as close to whisky perfection as anything I have ever drunk, over two decades. Of course, the young(er) fiery peaty smoky Islay charmer is there, but, with a supple yet significant veneer of complexity which comes from maturation over a longer period in sherry and also bourbon barrels. There is sweetness, honey, and freshness, and also magnificent burnished peaty, briny notes, as one would hope for. Adding a little water opens up this marriage of styles even more. It is the best expression of this whisky style I have ever tasted. Expensive, yes, much better to drink than the much vaunted (and much more expensive still) 30 year old Laphroaig. Try to find a generous friend with a bottle and a willingness to share a dram with you !

I tasted this magnificent dram at a whisky event in Boston poured by Simon, the brand ambassador of the East Cost. It is the second event that Simon has served me this dram. And it is the second time that it wins the crown of the best dram of the evening.

Nose: Apple and pears at first. Then the peat is still there (more than in the 18 yo) with some sweet notes that give a very very nice mix. very smooth and complex

Mouth: All in apples with some smoky peat. Again very smooth, it is like tasting a liquorish nectar.

Balance: one of the best, nothing goes out, everything in there work as a team. For me, it is like the Montreal Canadians of 1993... they worked as a team and there was a lot of overtime wins !

Great review! I was lucky enough to sample this recently at the Whisky Show in London, and really enjoyed it, certainly one of the standouts. I just wish it was more affordable so i could buy a bottle!

I so agree with Kutter's assessment: magnicifent. Simon poured me a sample during Denver's 2012 Scotch Malt Whisky Society Extravaganza. The sample ruined me for wanting anything else for the rest of the evening. All I could think of was mugging Simon and hiding in a corner with the bottle until the police came to take me away.