Average score from 2 reviews and 11 ratings 80 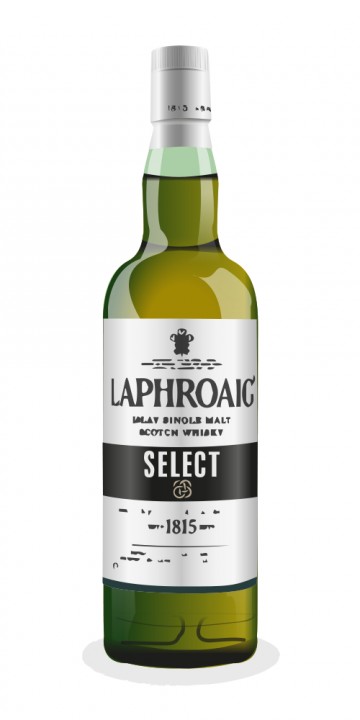 The Laffie Select jumps on the bandwagon of the NAS hype. The name Select points to the selection of casks that was used for the composition of this new release, being oloroso sherry butts, PX seasoned hogsheads, quarter casks and straight American white oak (probably virgin wood). According to the website, this enabled them to discover 6 new taste combinations. The final selection for bottling was done by their fanbase, the Friends of Laphroaig. Well, maybe that is what the Select refers to. Anyway, let us get to it.

On the nose it is only slightly medicinal and completely devoid of fruit (bar some coconut?) and offers only wood shavings, pepper and a twig of mint. Atypical is the least you can say about this. Some stable scent. Reminds me more of Glen Scotia than Laffie, to be honest.

On the palate, I get a lot more spice and loads of oak – a bit too much to be truly enjoyable. Loads of hay, tea that has been in the glass too long, mint and aspartame. Yes, this is fairly sweet. But where is the typical ashtray, asphalt or seaweed? The whole it fairly light, by the way.

The finish is rather short, with vanilla at the very end.

To be honest, I am totally underwhelmed with this new Laffie. Thanks anyway, Pat.

Thanks for your review, Mark.

Mmmm, aspartame. Wow, that is a contender for worst possible flavour profile. One more reason for me not to want a bottle of Laphroaig Select. No one on Connosr seems to like Laphroaig Select. It will be interesting to see whether Laphroaig keeps this expression around for later iterations. I suppose that that depends on whether or not Laphroaig Select fulfills its alleged purpose of bringing lighter flavour profile drinkers over to Laphroaig. I really do suspect that "Laphroaig Light" flaovur lovers can do reasonably well with blended Scotch at half the price.

It's like 'Diet Laphroaig' but at the same time all the more dangerous as you can have more than just a few before it overpowers you.

I'm reliably informed by a Laphroaig employee that Select scored very well in Asian markets as it suits the softer palates of that region. I'm guessing it may be a bridge between Islay hardcorers like myself and those who initially find the abrasive qualities of massive peatiness overwhelming too.

The more I try it, the more it grows on me.

I was on the Laphroaig website the other week and saw that Cask Strength Batch 006 had been released. So I immediately stuck a couple of bottles in the basket when I saw the Select. I hadn't heard much of it at this stage. Some people has said a few things but being a fan of everything Laphroaig (generally) I thought "what the hell" and added a bottle to the basket.

Laphroaig say...” Select gets its name from the special selection of American and European casks, chosen for their unique character that they give during maturation. Our Inspiration for our new Global expression has been take from history – 70-80 years ago, the time of the last family member owner of the distillery, Ian Hunter. Ian was one of the biggest influences in the history of Laphroaig indeed he was one of the first distillers to travel to bourbon county in the USA to identify new sources of casks that would give him greater consistency as well as new flavours. He later married this ‘new’ style of Laphroaig with his traditionally matured (European cask) Laphroaig. Inspired by his early work , we have used Oloroso sherry butts, straight American white oak (non-filled with bourbon), PX seasoned hogsheads, Quarter Casks and finally of course first fill Bourbon Casks. This varied cask maturation technique enabled us to create 6 new flavour combinations that were then tested with our FOL’s to choose their favourite style and indeed name. The winning flavour and name chosen by you is LAPHROAIG SELECT.”

Serious marketing gimmickry if you ask me but then I am a sucker for a well marketed malt so who am I to complain.

It is bottled at 40%, pale in the glass and the nose...It is a Laphroaig, you can recognise its familiar profile but compared to the 10, QC or Cask Strength its a bit less TCP/ Iodine and more woody smoke and ashes. Vanilla, sweet grapefruit, smoky, salty.

The nose ticks the box...check so it cant be too bad!

On the palate it is salty, smoky, BBQ ashes, woody, nutty, slightly sweet. It is not quite as oily as I remember the 10. You do get the iodine but not as strong as the QC.

Oddly, the finish is not as long as you expect or want. It is medium, smoky, salty, lovely but fading.

Its a Laphroaig Jim but not as we know it.

I like it but it's a bit tame. It would be an absolute ideal intro to Whisky fans to Laphroaig but those who want the “punch in the face” Laphroaig you have come to expect then its not quite that. Don't get me wrong, I am not saying it is not good and the beginners tag is not to say it isn't good, it is... its just not great. QC is still king in this price point.

Fun how the select, which seems to get a lot of stick and is readily available at the discount price of £25 was just getting 'almost' the best rating of all the Laphroaigs in a head to head by the chaps at WhiskyVault, only beat by Lore... :) [including Cairdeas, 10, triple wood, QC, Lore]

@Nozinan Bully for you! Even better!