Average score from 3 reviews and 4 ratings 89 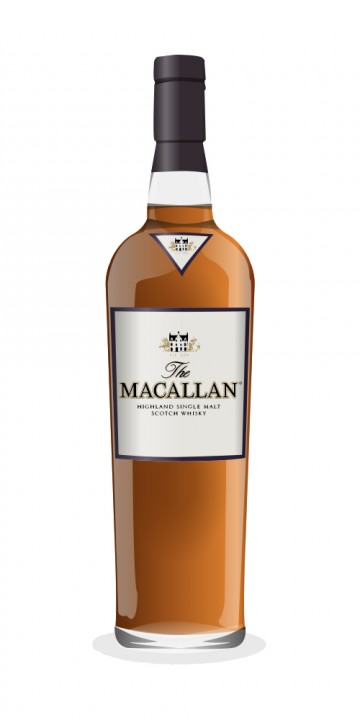 I drank this whisky for the first time with Mr Bob Dalgarno, Macallans' famed whisky maker, when my whisky club hosted him not too long ago. He was a wonderful and pleasant guest and the whiskies weren't too bad either.

The one thing that stuck with me as I interviewed him for my YouTube channel was essentially how hard his job is. To match color, taste and maintain consistency in all his whiskies without any caramel is quite an astounding feat.

Add to the fact that he started his career at Macallan as a warehouseman and then worked his way through every stage of whisky making – mashman, brewer, stillman, warehouse supervisor, operations manager – to finally join the panel which selects casks for bottling in 1994 you can be sure he has my respect.

Known as the Whisky Maker he set about creating this one-off NAS expression exclusively for travel retail. When asked about the curious 42.8% alcohol strength he told me that prior to January 1980 the standard bottling strength used to be 75 Imperial Proof before it was dropped to the current 40%. This is a homage to that era.

Using a combination of European sherry-oak balanced by American sherry & ex-bourbon this whisky has a number of ages in it but apparently none younger than 12. I will take his word on that. My sample is from a brand new bottle and served at 42.8%

Quite crisp. The sherry is quite sharp. Hops. A touch malty. Bitter chocolate. Milk chocolate. Hazelnut. Praline. Lots of oak. Gets earthy after a while. Jute bag. Barley. Then fruity. Orange peel. Red apple. Red grapes. Then spicy. Ginger. It's not a bad nose. It started off nice and crisp but the slight maltiness threw me off a little. This could have been perfect. But it's not. 22/25

When I first had a sip of this at our tasting I was floored. It tasted absolutely amazing. However, I'm now convinced that the mood and the setting had a huge part to play in that. Quite thin. Lots of oak. Cinnamon. Peppercorns. Almonds. Hazelnut. Bitter marmalade. Clove. Feels a little raw for some reason. It shouldn't. But it does. 21/15

I'll be honest. I liked it a lot better when it was Bob and myself sharing a drink. Not so much right now. Though, I must be honest. My friend and I pretty much killed this bottle while watching a horror movie at his house. Not sure if I liked the whisky too much or if I was just using it to take the edge off.

This Whiskymaker's Edition comes in a 1 litre bottle, available in the Duty Free range. With a price tag of around 250 EUR, I find it somewhat expensive for a NAS whisky. It was composed by Macallan Distillery’s manager Bob Dalgamo and is a mix of sherry and bourbon casks. Apparantly 42,8% is Bob’s favorite drinking strength. Oh, right, the barley is grown on the Macallan Estate.

The nose is rather light, but very fruity. Think orange marmalade, fresh figs, cake, brown sugar and some maple syrup. Raisins, fresh coconut and some dark chocolate, albeit very light. Hint of coffee. A touch of ginger and nutmeg, but also very light. Everything on this nose seems somewhat light. Bantam, to use a boxing term.

It is nicely oily, but honeysweet on the palate. Fresh figs appear first, then cake and dried fruits. Apricots and peach. Orange peel. More cake. Butterscotch. Mildly spicy with some tannins.

The finish is fairly long on chocolate and orange cookies, spices and nuts.

Apart from the light nose, this is quite a nice Macallan on fruit and spices. But way too expensive in my opinion.

Nose: Sweet on the nose, with the ‘trademark’ Macallan dried fruit, zest and chocolate. The chocolate elemnts here are quite distinct, and it’s a lovely combination. Very surprising stuff.

Palate: Very nice, full , some spice, and a lot of the chocolate and fruit going on,some zest also. Orange Milk chocolate combination, which i like so much.

Finish :Very long and comforting finish, with dark chocolate / sultanas lingering on and on.

Bottom line: A real treat of a dram. When Kfir told me he got this one and it’s brilliant i was quite sceptic, but when i first sampled it (before this sitting), i was impressed with the quality. It’s a dram that calls for another, and the bottle can get empty very fast. Be warned!