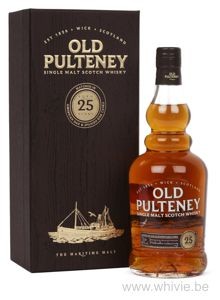 The Old Pulteney 25 Year Old matured in American oak for the first 22 years and was then allowed three more on oloroso sherry casks. It’s the successor of the Old Pulteney 21 Year Old that was named best whisky in the world by Jim Murray once upon a time.

Lovely nose on sweet malt and dark honey, upholstered by apricots and blood oranges. It is nicely waxy, to be honest. Mango and peach kick in. Pineapple appears. Slowly but surely this turns into a tropical fruit stew. Some pastry appears as well. Fruit pie with some cinnamon and vanilla custard. Nice!

Wonderfully sweet on vanilla, peach, gooseberries and mandarins. In the meantime, a whole rack of spices is presented: pepper, ginger, cinnamon and some mint. On the palate it is waxy as well, which I find quite attractive. And despite all the sweetness – that really captures your attention – the maritime traits of this malt remain to be discovered in the background. A bit of a salty note appears towards the end.

The finish is sweet, zesty and drying with some salt at the death. Impressive Old Pulteney that thanks its character mostly to the bourbon casks. The sherry was quite discreet. Around 350 EUR, though.

END_OF_DOCUMENT_TOKEN_TO_BE_REPLACED

Thanks for the review, Mark. Tasting vicariously through you is the closest many of us will come to tasting such drams. Sounds lovely!