@broadwayblue I would think any Bermuda rum would be fine.

@Victor I’ve had a sample of the Lemon Hart 151 for a long time. I just haven’t found the time to get around to it....

@OdysseusUnbound you don't need an hour to do a considered reflection on Lemon Hart 151. 5 ml and you will get the idea--very quickly.

@Victor Lemon Hart 151 was an epiphany. I first tasted it in Collingwood with you and @paddockjudge from a 1 or 2 oz sample bottle. Yu allowed me to keep what was left of the sample and I was hooked. Then you brought me a bottle 2 years later I think. I still have some left. I never pour more than 10 cc at a time and it takes a long time to finish. A drop of water opens it in amazing ways.

I've since sourced some from the east coast and I think I distributed some to Sudbury and central Toronto. I almost lost those because my cousin chickened out mailing it. She finally sent it to me by UPS, but to my old address. If I hadn't gotten the tracking number from her I would not have known.

It gave me a chance to visit the old house, and the owner invited me in to show what they had done with it. The painted the kids bedrooms but left the paintings my mother had made on the walls... I was touched.

@Nozinan thank you for the correction as to the year of our first sharing of Smith & Cross and Lemon Hart 151 Rums. I wasn't sure which year it was and I did not want to overstate.

I suppose this is a good place to post this.

I was invited to join a little rum club ran by a Instagram member who's a bartender out of Toronto. Initially I have to admit I was a bit skeptical vis-à-vis the cost and what would be offered. He has an extensive rum collection as well as pretty deep connections so when I saw the first proposed flight I wad convinced of how serious it would be.

In the very first tasting I was able to try a rum that was on my bucket list so that's pretty good already.

The other part I think was worthy mentioning to me was the fact that it was really nice to see diversity in a tasting. These affairs tend to be rather uniform and run by the same bros, so this small but significant impact wasn't lost on me.

The line-up was also diverse in the style of rums, I'll post in depth reviews later.

2-Whisky Broker W.I.R.D. (West Indies Rum Distillery) Barbados 2000 (Blackrock): A rare style called Blackrock or Rockley, either made to mimic a closed distillery or as a blending component, last distilled in 1986 & 2000. Very unique, almost meaty or medicinal. Believed to have been distilled on their Vulcan Chamber still.

3-1423 S.B.S. South Pacific Distillery Fiji 2009-2020: Danish Indie bottler that is getting a lot of attention, same goes with SPD out of Fiji, this is from their pot-still and boy is it unique! Not unlike some of the Port Mourant distillates in that you'd think they were making this stuff in the same place as they make, glue, new tires and other materials.

4- Saint-Lucia Distiller's Chairman's Reserve Master's selection Single cask 9 yrs. A rarely seen version from this distillery, this was a blend of rums from 2 of their Pot-stills, blended together and re-racked for an additional 5 years. It had this phenolic quality, weight and presence, not funky in the way folks think of Jamaican rums, really distinct. I am on the hunt now!

The photo shows a set of samples of National rums of Jamaica but that's for another day. I've ranted enough.

about one year ago 10Who liked this? 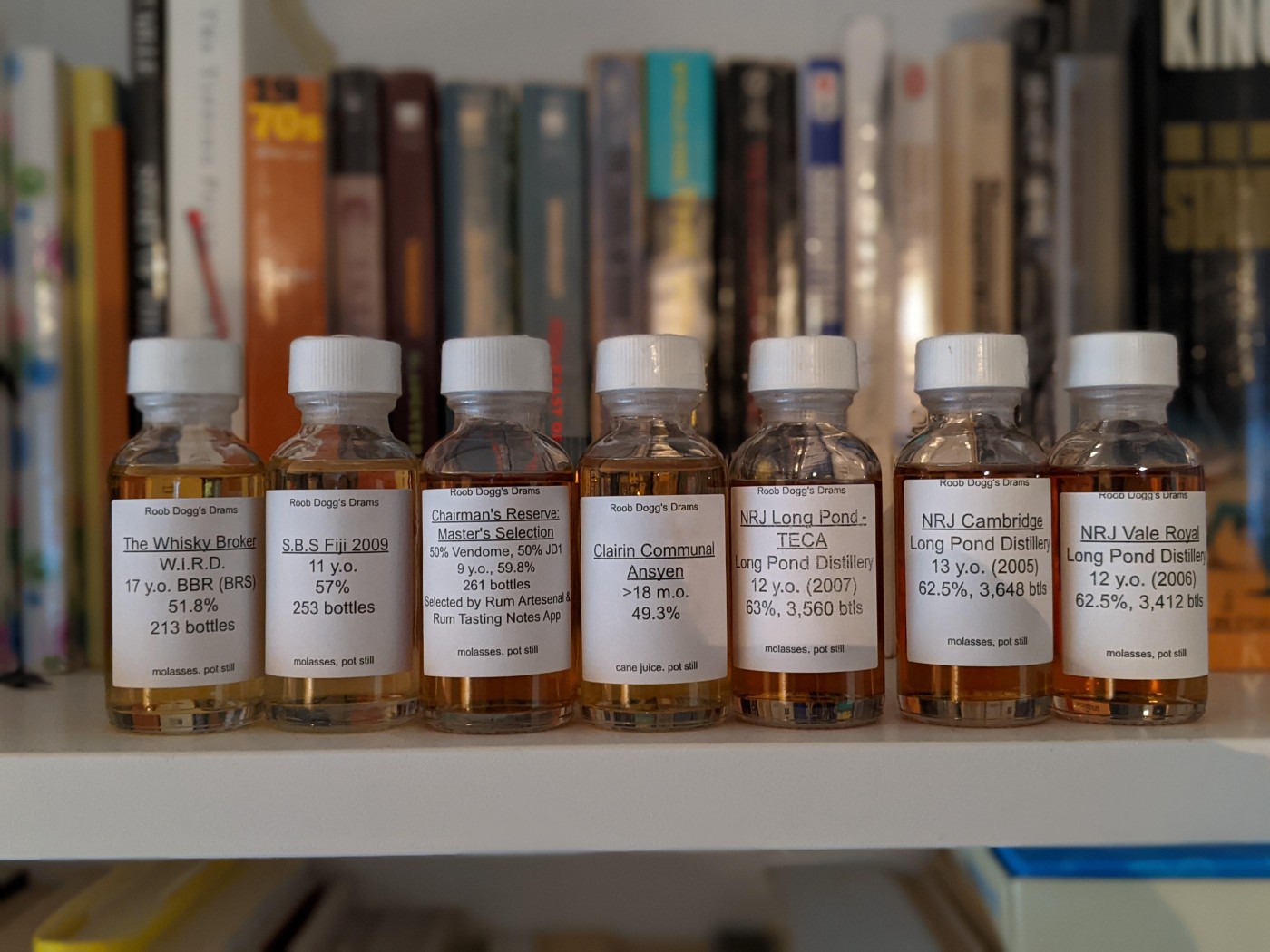 After rum ruminations and brandy banter, can rotgut rhapsodies be far behind?

@cricklewood Would that be the sample club proposed by Reuben V? I thought long and hard about that one....

19th century illegal cadaver trade was sometimes disguised by transporting the bodies in whiskey barrels filled with spirits. The merchants then apparently often sold off the liquor used after the bodies had been delivered for dissection in the medical schools. The unwitting customers received "infused" liquor, you might say. AKA "rotgut liquor"

@OdysseusUnbound It is indeed, not cheap but in the scheme of things it's not that bad and it's been strong thus far. This month's line-up is equally as impressive.

@cricklewood I'm not sure if this is the right place to ask this question, but here goes: Richard Seale says in this video that using a blend of pot distilled and column distilled rum creates a better spirit than if either one was presented "alone". Richard (and you) obviously know way more about rum than I do, but from what I've experienced so far, I disagree. I think that an "exclusively" potstill rum would be more pleasing to my palate, at least where neat sipping is concerned (cocktails are obviously another ballgame). Am I crazy? Richard sounds a bit like a certain well-known Canadian whisky writer who often extols the virtues of less flavouring whisky and more "neutral" whisky in a blend. The elephant in the room is obviously cost and profit margins, right? Column stills are cheaper, more efficient, and thus yield higher profits, right?

@OdysseusUnbound Caroni used both types. Diamond Distillery and Savannah distillery I think also use both, among many others.

A Port Mourant, which is a fusion of the rye-based Port of New York and the port and rum-based Improved Dunlop. It keeps the spirit to port ratio of the Port of New York, but uses rum instead of rye, and swaps out the maple syrup for Demerara Syrup, and some of the Angostura Bitters for Mole Bitters (as in the Improved Dunlop):

Stir with ice, and then strain into a coupe glass. Garnish with cocktail cherries. 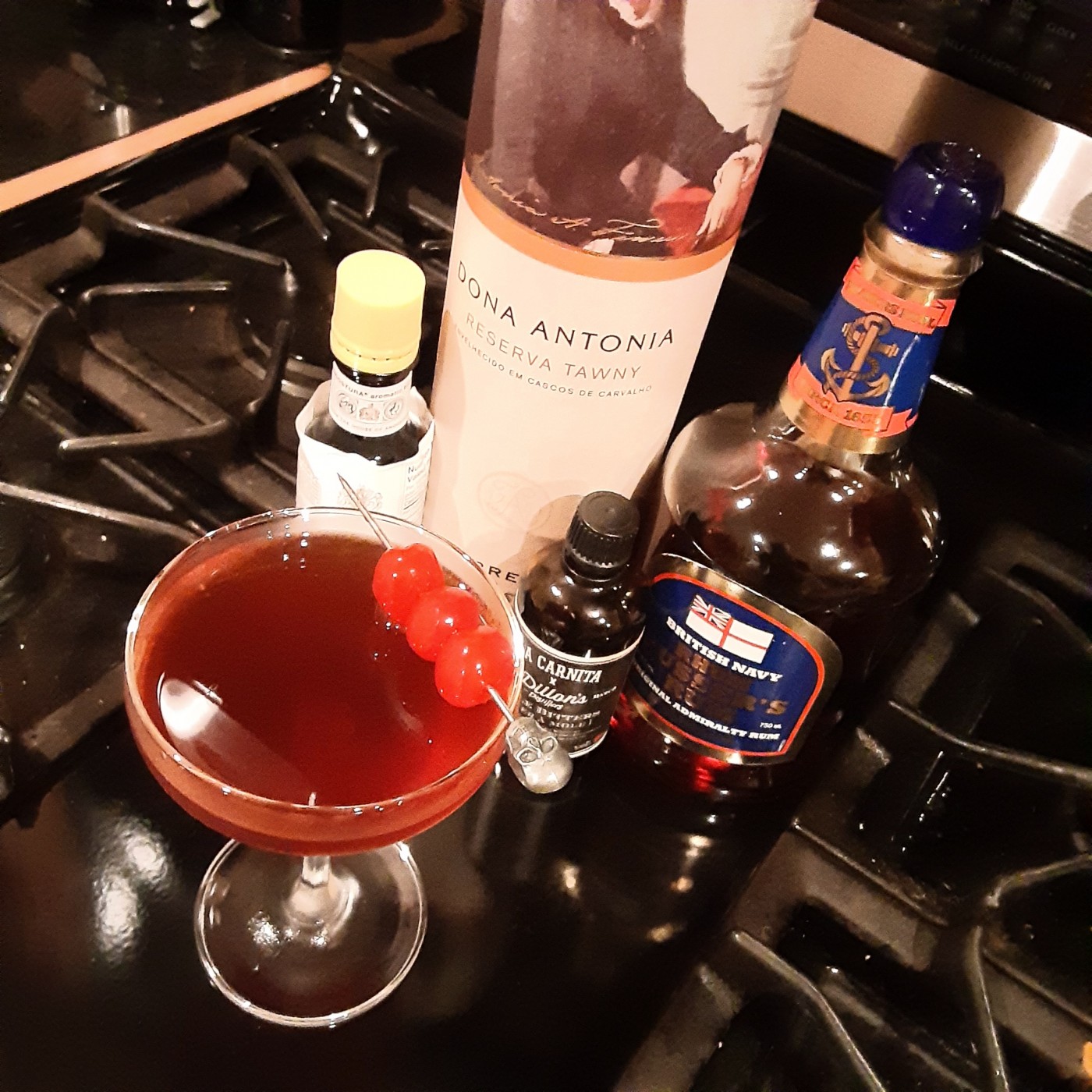 Gosling's 151 Proof Black Seal...thoughts? Currently at the LCBO for just under $50 CAD.

@YakLord I’ve had a bottle for over a year and it’s still about 3/4 full. It’s good but not spectacular. It adds some nice oomph to Tiki cocktails and makes a decent Dark & Stormy but isn’t all that great neat.

@OdysseusUnbound I wasn't thinking it would be that great neat, but if it works in cocktails, that'll be good. Thinking as a present for a friend who likes Dark & Stormys.

@YakLord, @OdysseusUnbound 10 years ago @numen brought me a sample of Gosling's 151 to sip. It was great. I bought a bottle 6 years ago which was and is good to sip, but nowhere near as good as the one I had had from @numen. I haven't used it to make cocktails.

Sipping on cask strength Caroni 21 YO. A very good choice on this night of freezing rain. 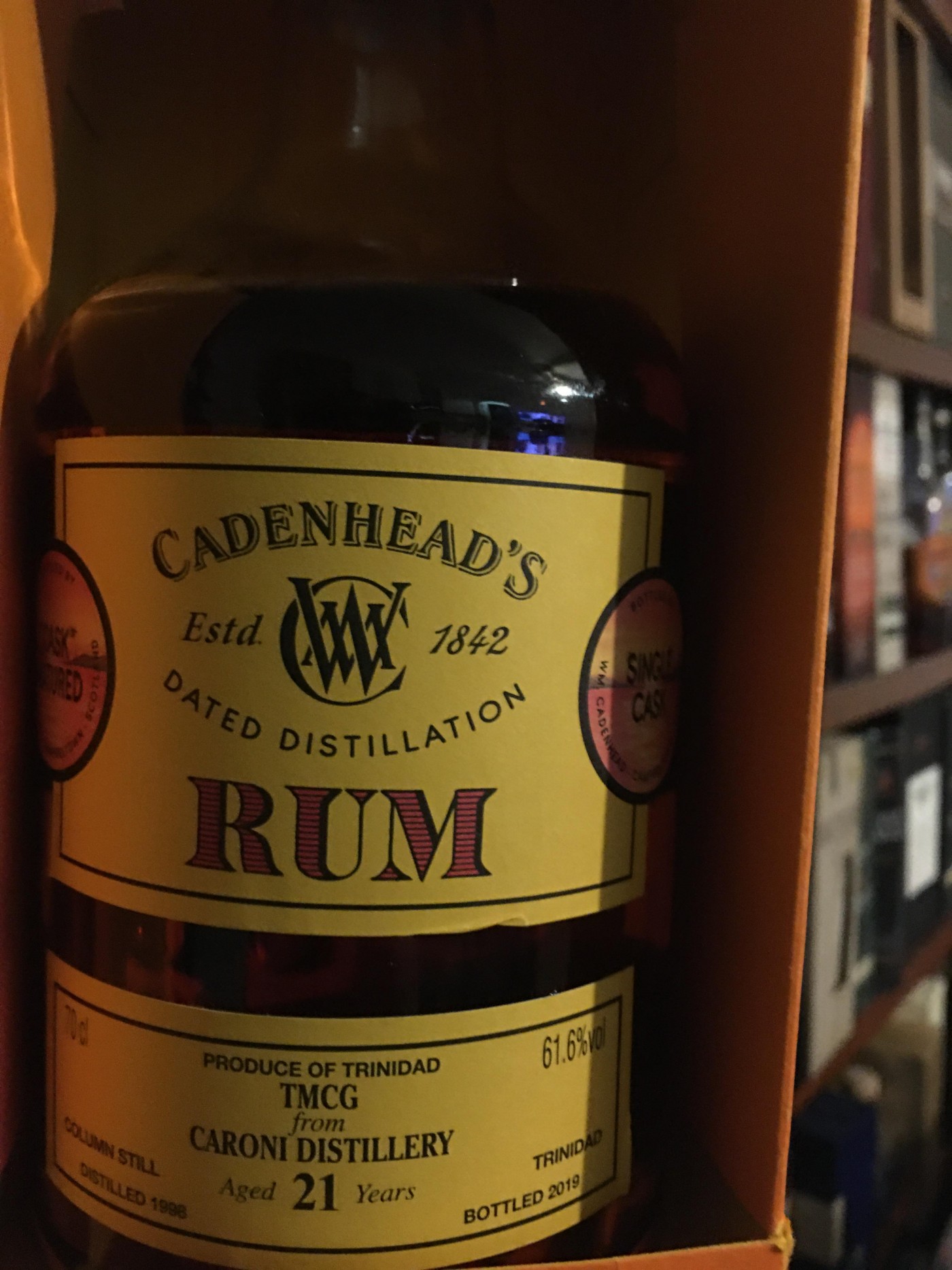 @paddockjudge We've got Sudbury like conditions here on the wet coast. -6C and a foot of snow. I could use some 61.6% rum right now. Having to make do with 61.5% SMOS Caol ila.

@BlueNote I’m sure you’ll scrape by.

Patiently waiting for Old Man Winter to unleash his full force. We've had episodes of cask strength weather, but not more than 15 - 20 cm of snow in one dump. When the big one happens, and we all know it will, the young cask strength Laphroaigs will be poured.

@BlueNote I can't even imagine what a foot of snow would look like. I tell myself I would like to move to Vancouver Island one day, but a foot of snow might persuade me otherwise haha. Maybe a summer cottage.

@casualtorture Believe me, we’re not particularly accustomed to it out here. We’re rain people. It only takes a couple of inches of snow for the streets of Vancouver to turn into a demolition derby.

Try being British ... I'd love, love I say, some snow to shovel

mind you, I think the mild but horribly damp weather we've been having is a perfect backdrop for cask strength fodder, rum or otherwise. It gets into yer bones, laddie!

@paddockjudge - freezing rain? Is that the wild-weather that warps pylons? Damn scary! My ex's family showed me pictures of the effects of it in Montreal - they all had to sleep in a school hall for about a week until power was resumed and the pylons all looked like a giant had twisted them for fun!

@RianC I lived through that ice storm in '98 in Kingston. It made the city look like something out of a post-apocalyptic movie (without zombies or people looting and killing). I could tell you stories...