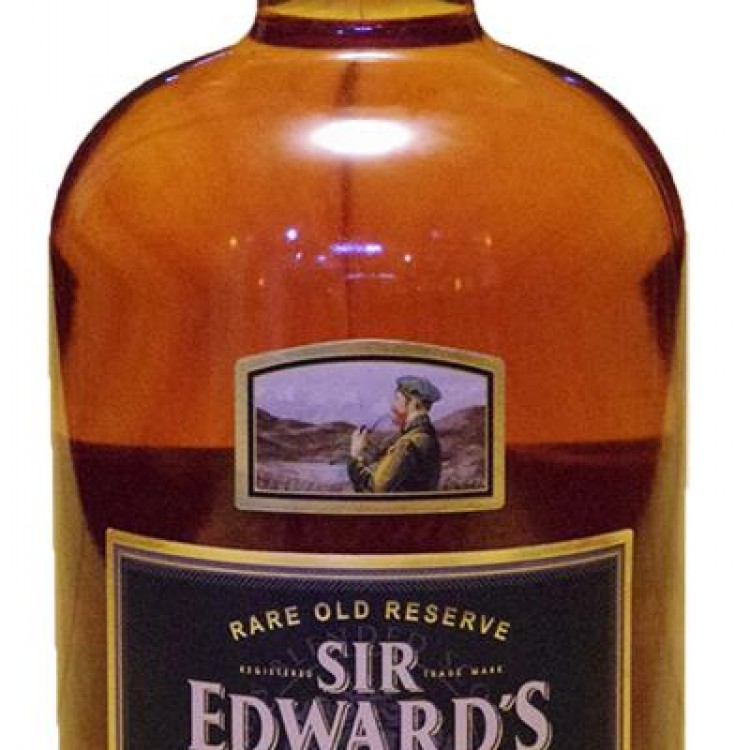 Since taking up residence in Southeast Asia, I had a visit from a dear old friend who remarked: “I’ve realized that everything here has the form without the function.” Quite so. Traffic lights are sprinkled around Phnom Penh – enough to give a Western visitor the impression that the municipal laws here are just like the ones back home in Cleveland. Gargantuan urban developments – mostly of Chinese construction – appear from a distance to be sitting on granite foundation blocks. Then you stroll up close enough to see that these are made of a cheaper material which has been artfully spattered with paint.

And some Western products are ubiquitous here which are not ubiquitous anywhere else: Sir Edward’s Scotch, 12-year, being one of those retail offerings whose quasi-familiarity has one doing a double-take. This isn’t a bottle I ever saw once, not a single damn time, on any of the hundreds of liquor-store shelves I surveyed in the USA. And it’s got me wondering if here at last is the caramel-tinted concoction which the Chicoms have invented in a subterranean lab to do us all in. Even though I’m deep in the Oriental wild, the price has me checking my six. How could it be so cheap? Eleven dollars? Really?

Color me paranoid, but there’s something too obvious about it, something too…explicit. The label sports an image of a bagpiper, all plaid and ruddy facial hair. The border accents are a homely violet hue, as if inspired by dim valleys in the Grampians. Within, the liquid is just the right tint of amber. The bottle’s so Scottish that it can’t be.

To its credit, I have to mention the color again. It’s one tint or two on the light side of the superlatively fake-looking scotch blends – Black Label, Chivas Regal, et al. The industry (or that subterranean Chicom lab) may have learned that drinkers, in an age when hyperactive online sharing leads to the obscurest niche enthusiasms becoming the talk of millions, really prefer their Speyside scotches as blondes rather than brunettes.

Right after the cap comes off, it’s bitter-sweet and a bit hard to take, as are all young blends. However, I’m always patient with such scotches, because it’s usually worth the wait. The exposure, the air, the chance to evaporate some of its tensions into oblivion (call it the devil’s share), maybe; something, I say, I don’t know what, brings this kind of whisky down to the ground, tames it, nay glorifies it. The tainted harlot transforms into a righteous babe.

Right on schedule, the same thing I’ve experienced a dozen times happens with Sir Edward’s 12. That sterile bitterness is exorcized by the exposure to Cambodia’s humid air, like Feminist ideology being exorcized by exposure to primitive reality. The results are terrific. It’s a creamy haze of apples and berries cooked in syrup, with a heathen grassiness underneath all of it. Then there are the bananas and the pineapples, with a light brininess that calls Clynelish to mind. Add to that a twinge of bright citrus. The nose and the tongue are equal to each other. It’s a delight and one of those “developers” I am fond of, going from appalling to wonderful within a day of opening the bottle. This is a sugar-fruit-and-spices number that is undoubtedly mixed from a variety of good scotches, though these are hard to pin down. Dalmore, Glenlivet, Scapa, Clynelish, and Glen Moray all come to mind.

What a powerhouse of a review. Bravo!