@Victor who knew you could get so much flavour out of a whisky at such a low ABV? That one, and Legacy, were eye openers for me.

Finished with a dram of Ardbeg Wee Beastie.

@Victor, I am looking forward to resuming live tastings. It has been too long since we last klinked glasses. There a few Canadian gems that have been released since we last gathered with our Connosr circle…. some cask strength stunners to sample.

Sunday I was visiting a friend and he opened this bottle of Highland Park 16 from the cask strength series; 58.9 ABV. If you like sherry finished scotches, you would like this! Peat, a bit of spice but very smooth and the sherry to round things out. A lovely dram! 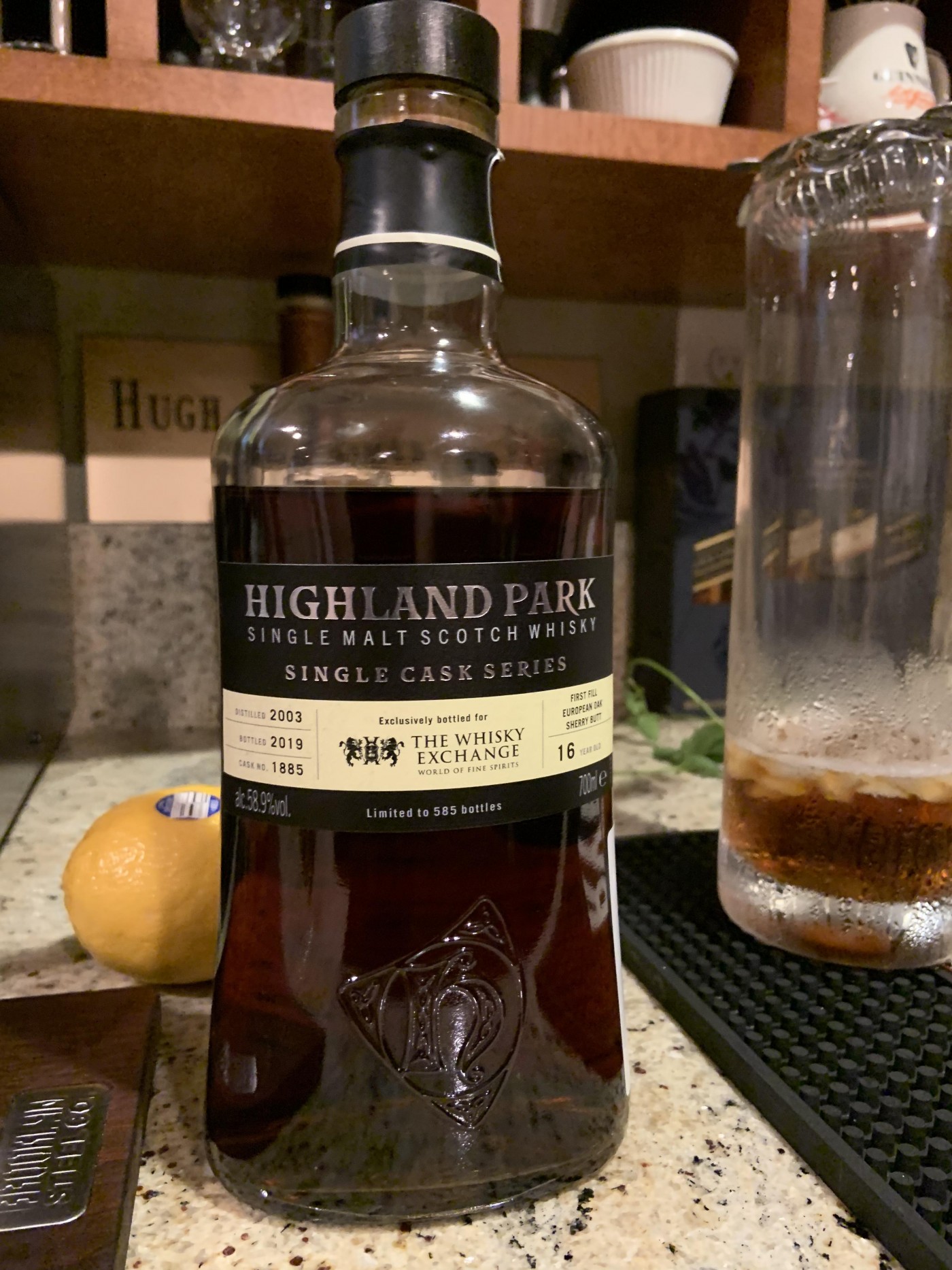 Tonight, my wife finished off her bottle of Glenfarclas 17. It is one of her favorites. However, the few sips that I had from this bottle were disappointing to me. It wasn't as rich or lush as previous bottles that we've owned.

For me, tonight, I did a semi-blind tasting of a new bottle. I say semi-blind because I know the age, distillery, ABV and that it is peated, but I don't have the official Society tasting notes to compare to my notes, at least not until tomorrow. This new bottle is exclusive to the American chapter and is being released by the Society later this week. However, it will be announced on the American chapter's Society YouTube channel tomorrow (Wednesday evening) at 8pm EDT. I have been asked to join the director of the American chapter on the YouTube broadcast to taste and discuss the whisky prior to its release so members have a better idea of what they are getting, if they decide to purchase a bottle.

Neat Nose; sweet peat, earthy, smoked meat and a slight industrial note, but it wasn't off-putting. While the peat was very present, there was little to no smoke. Also, while I don't yet know what cask was used, there was something that reminded me of French oak. However, it is more likely STR (shaved, toasted and re-charred) ex-bourbon.

Neat Palate; meaty (bacon) and woody (that "French oak" note from the nose remained on the palate, but now with the addition of a varnished furniture note).

Nose with water added; sweet peat, again, but the meat note is more charred than smoked.

Palate with water; glazed ham with a chewy, thick viscosity.

I prefer this one with water. The flavors are amplified with water. It is a big, bold dram with a very unique flavor profile. This is not Islay peat. It is more earthy than medicinal. Interestingly, after 15 - 20 minutes in the glass, the nose with water, which was initially intense, is now much more mellow. It reminded me of a musk cologne. While the nose mellowed, the palate did not; still huge. Another interesting note, I nosed the empty glass after a half-hour or so and it was all smoke, which had not been present at any point prior. A fun, complex whisky and perfect for the fall and winter.

I will reveal details after the broadcast tomorrow. By the way, if anyone wants to see me make a fool of myself, you are welcome to watch the broadcast (link to the Society's YouTube channel below). You don't need to be a Society member to tune in.

I’m sipping the last of my current bottle of WT 101 while preparing chicken fajitas. Wild Turkey never disappoints. And it’s less than half the price that the LCBO plans to charge for Maker’s Mark 101.

Post-dinner dram is a healthy pour of Ardbeg Uigeadail. This is one to enjoy slowly, in my opinion. Lovely stuff as always.

Tonight, more of the dram that I described last night, but now that the tasting has been completed, I can reveal details.

Here's the official tasting notes, if interested; Fall in the Highlands with its deep amber hue, a gorgeous liquid slow dancing in the glass. A mild and mellow nose-feel, notes of campfire toasted marshmallows, smoked salami and juicy fresh orange juice. Dried fruits, figs and crystallised orange peels contribute to a comfortable and comforting moment in time. A little water raises damp, earthy, mossy notes and increases the scents of smoke and ash, like waking up to the smell of bacon fat from your tent, the smell of damp earth surrounds you. Smoked brisket rides in on a lightly oiled mouthfeel that slightly spritzes across the tongue, and is carried off by a drying, long smoky finish of fatty burnt ends in wellies bound in hessian. A sweet pop of fondant settles in the mid palate with a dash of water. An adventurous spirit, bound to transport you to camping, Highland style. 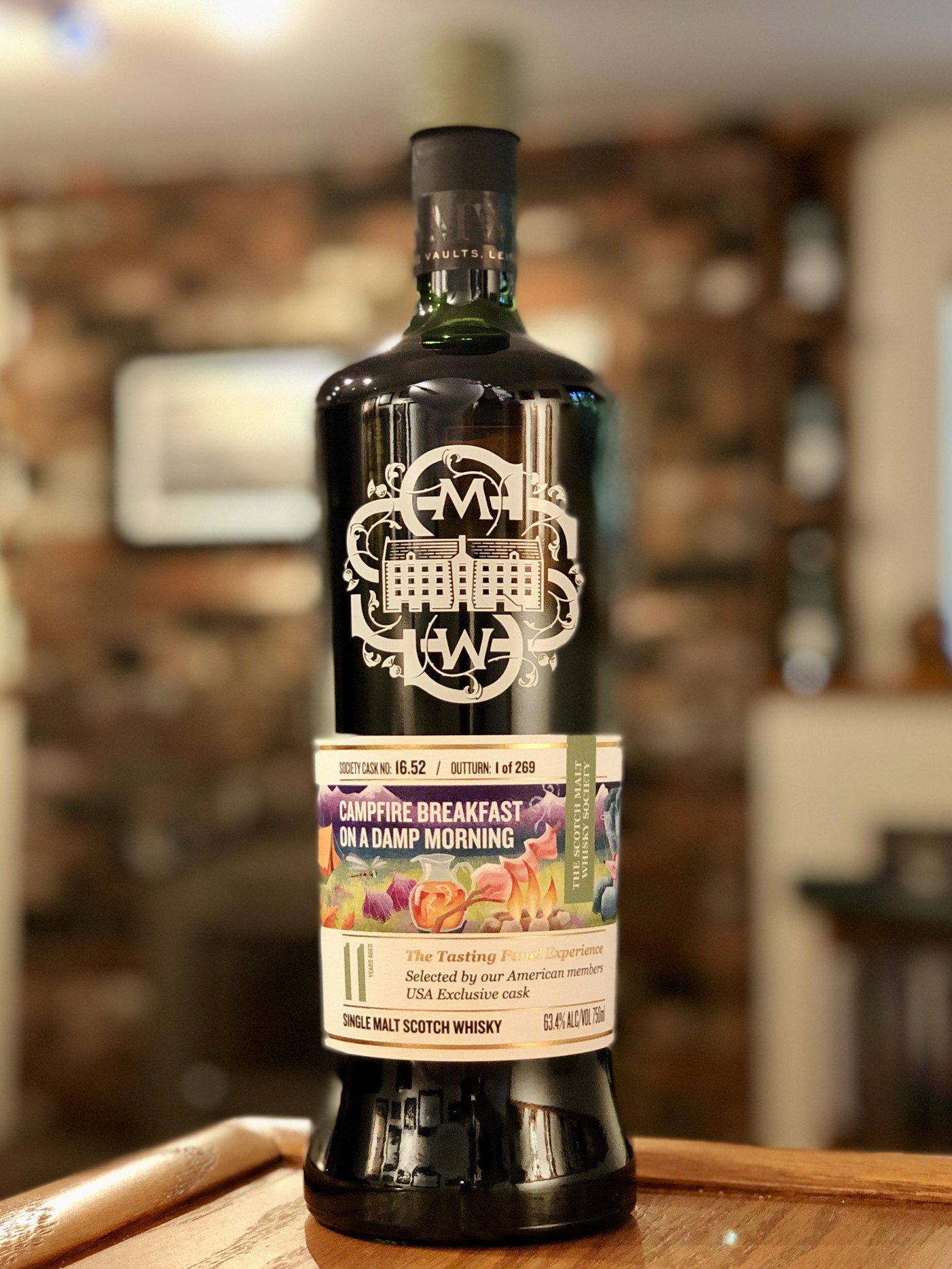 @OdysseusUnbound - the WT101 I have open is the best batch I've ever had. It's slightly less punchy and more rounded but better for it. Such good value!

@BlueNote My current bottle of Uigeadail is lovely, but not quite as good as some if my previous bottles. This one seems to have less sherry character (chocolate, walnuts, Christmas cake) and less overall “depth” than previous bottlings. I’d rate this one 89/100 or so but I’ve only consumed about 1/3 of the bottle so far (not all at once).

A Thursday night line-up for my local whisky 'club'. I've ignored the Glenallachie up untill now. Yes, Billy Walker is a legend, but I was put off by almost everything having a heavy handed wood finish. The 10 CS (batch 4) is very good and the virgin oak restrained. Tamdhu Batch Strength was a bit of disappointment - very spicy and a bit astringent. Although lovely, the 'farclas paled a bit alongside the CS offerings. As you'd expect the 185 had a lot more complexity than the 30 year old. The Springbank I took was batch 21 with the unusual cask make up of 45% sherry, 25 bourbon, 25% Burgundy, and 5% port. It doesn't dissapoint.

10 months ago 8Who liked this? 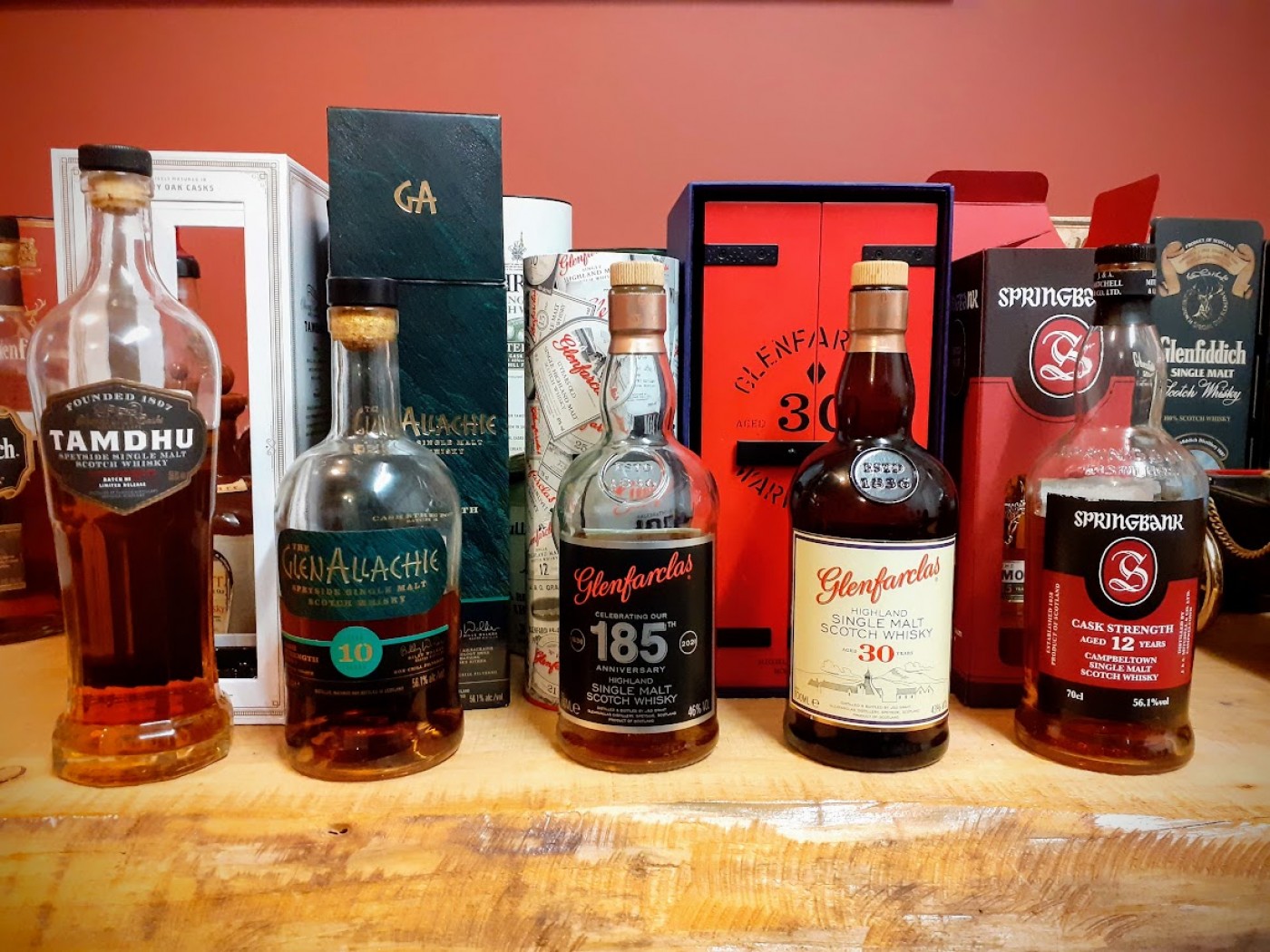 @Hewie 3 out of 5 ain't bad. I especially like the sound of the Springbank CS.

4pm of a Friday is close enough to let the weekend begin aye? I just opened the Springbank 10 I bought a couple of days ago. Cheers

10 months ago 8Who liked this? 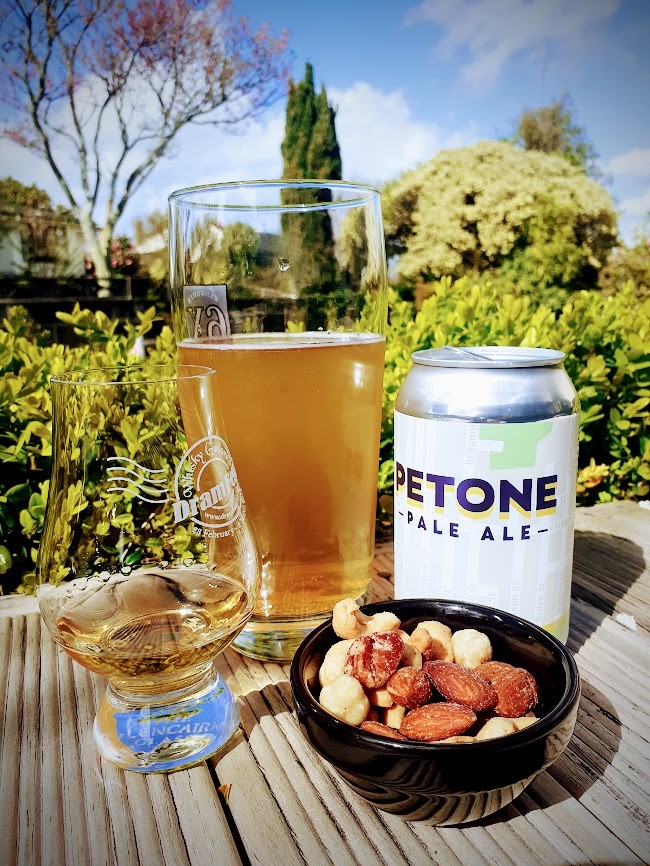 Edit: I’m having some of this Oogie now and I stand by my 89/100 assessment. If this was my first taste of Uigeadail, I’d be impressed and happy with my purchase. Heck, I am happy with this purchase. I believe I paid the good doctor about $100 (give or take) for this bottle (via Calgary). “Not as good as the last one” isn’t an indictment when it comes to Uigeadail, imho.

@OdysseusUnbound I hear you: they're all good, just some are better.

I am celebrating the October Hump with something special. Yes, it's noon local time on this the 16th day of the 31 day month of October. The drink? Aberlour A'bunadh Batch # 26, 60.6% ABV. This is my last pour from this bottle. All that remains from this bottle is a sample which I gave to @Nozinan.

This is a great batch, vying for my favourite A'bunadh ever. I wish I had 2 more bottles from Batch # 26. Slainte to all of my Connosr friends and to October!

10 months ago 9Who liked this?

@Victor And I thought I was taking my time with batch #34!

@MRick it's hard to make a final goodbye to an old beloved friend.

Not whisky, but on Thursday night, I did a head to head tasting of 3 gins; Botanist, Barr Hill (Vermont) and Dingle (Ireland). I was blown away that the Botanist had no nose compared to the other two. Dingle was best of the 3. On the palate, Dingle was my favorite, followed by the Botanist. I don’t care for the honey that is added to the Barr Hill. It is very noticeable, but my wife loves it.

Last night (Friday), a couple of Black Manhattan’s for my wife and I (Maker’s Mark 46).

@bwmccoy I wasn’t crazy about The Botanist neat, but it really shone in a Martini or G&T.

@Hewie Definitely a good way to start the happy hour(s).

@bwmccoy @OdysseusUnbound I've had half a bottle of Botanist languishing in my freezer for about 4 years. I much prefer Tanqueray N0.Ten or Hendricks for martinis and Bombay Sapphire works fine for a G&T. I guess I should try the Botanist again some time just to be sure I don't like it.

Tonight, A couple of Jerry Thomas Manhattan’s (Rittenhouse BiB) for my wife and I.

I’m finishing the last of my Larceny (review forthcoming). The bottle has been (spoiler alert) pretty, pretty…..ok. This pour has been put on steroids with a modest addition of Nozinan’s “Booker’s Blend”.

@OdysseusUnbound Did I pick up a Larry David reference there? “Pretty, pretty good.” Try to Curb Your Enthusiasm.

Yesterday (Sunday) afternoon, I attended a friend's birthday party, but I feel like it was I who received the presents.

19 year Pittyvaich SMWS 90.12 "Smell the sea beside the Spey" from a refill ex-bourbon barrel. 56.7% ABV. This blew the 30 year away. Obviously, the same distillery, but it was like someone had turned up the volume on the flavors. Stunning!

30 year (Apr. 18th, 1988) Glen Grant SMWS 9.150 "Thyme well spent" from an ex-Oloroso Butt before being finished in a 1st-fill ex-Pedro Ximenez Butt. 54.7% ABV. The sherry influence was lighter than you would expect, but beautifully balanced.

Macallan Edition No. 6. 48.6% ABV. I know these Macallan Edition's are widely sought after, but not sure why they are so hyped. It was a very nice dram, but to me, it wasn't special enough to justify the hype.

Finished with Highland Park 17 year "The Dark". 52.9% ABV. Again, another very nice whisky, but for me, doesn't live up to the hype or the price.

The first 3 drams were obviously my favorites and very special. What a great way to celebrate a good friends birthday.

10 months ago 7Who liked this?

@OdysseusUnbound Oops! I've opened my bottles of Macallan Edition No. 1-3. I didn't know I was suppose to collect them!