@TracerBullet I opened my Editions #1 and #2 not thinking I could make a 'killing' on them later on. Oh well. Time to pour myself a couple of drams to drown my sorrows with my mistake.

@ajjarrett @OdysseusUnbound and @TracerBullet - The Macallan Edition #6 was on my friend's whisky shelf still in the turquoise colored box that it came in. One of the attendees to the party asked our host if the bottle was open. He said it wasn't, but said to go ahead and open it if he wanted to have some. Obviously, my friend is a drinker, not a collector. :-)

Or maybe he had a few too many and didn't realize what he was agreeing to. HA. Now, on a more serious note, it is good to hear more people are 'drinkers' and not 'collectors' because collectors do play a role in the inflation of prices.

A local restaurant, on Tuesday nights, opens "special" bottles and sales them by the dram at cost. Last night was especially special in that they opened 4 bottles from the ImpEx Collection and sold 1oz pours as a flight of the 4 bottles. (ImpEx Beverages imports Whisky, Gin, Rum, and Mezcal from Scotland, Belgium, Wales, Japan, Israel, and Mexico.) The price point for the flight was outstanding ($22 USD).

First up, 14 year (Distilled March 2006) Glen Elgin single cask from an ex-bourbon barrel. 52.5% ABV. I loved this one. A beautiful example of a Speyside dram. I told the local ImpEx account rep that I wanted to purchase a bottle!

Next was a 40 year single cask blended Scotch from the Edrington group (Macallan, Glenturret, etc) aged in a sherry butt. 525 total bottles. 45.5% ABV. This was stunning! The nose reminded me of the smell when you are visiting a winery with all of the evaporating wine from the aging casks filling the air. The palate was perfectly balanced between the sherry influence and the oak. This would be a great dram to share with people who think blends can't be as good as single malts.

Next was a 21 year (distilled Nov. 1999) single cask from an Orkney distillery (I was told that it is Highland Park) aged in a hogshead (assume ex-bourbon based on taste and color, but it wasn't detailed on the label). 50.8% ABV. This bottle recently won best in show at a spirits competition in San Francisco. Having said that, to me, it's a quality dram, but nothing special. I've tasted this one previously and last night didn't do anything to change my original impression of it. Again, nothing wrong with it, but it was my least favorite in the flight.

The final dram was a 12 year (distilled July 2008) single cask Caol Ila from an ex-bourbon hogshead. 58.4% ABV. Wow! This was outstanding! Huge nose. If nosed blind, I would have thought it was an Ardbeg. The palate is typical Caol Ila, but on steroids. If I hadn't committed to buying the Glen Elgin, I would definitely purchase a bottle of this. This is everything that I look for in an ex-bourbon Islay dram.

This flight was so good, I ordered another one with dinner. Hard to pass up such quality drams for $22.

For dessert, I had a Boulevardier cocktail, but I didn't ask what whiskey they used. It was, however, very good.

Not bad for a Tuesday night.

@bwmccoy Wow, that is as good a 22 bucks worth as you’re ever likely to get.

Tonight, I attended a virtual Halloween cocktail making class. The kit contained all of the makings, but a lot of makings were pre-mixed so I don't know what brand of spirits were used.

Vital Claret - Blackberry, Grenadine, Lime, Agave and Bourbon with black salt for the rim of a rocks glass. This was my wife and I's favorite. It almost tasted like grape soda, but without being too sweet.

Love Potion No. 6 - Pea Flower Tea, Violet Liqueur, Basil, Rosemary, Sage, Thyme, Gin and Lemon Juice. This was our second favorite, but the sage, especially on the nose, was a little overwhelming.

Seven of Swords - Vodka, Apple, Ginger Beer Syrup and Black Cherry. We did not care for this one at all.

I’m currently sipping a gin & tonic made with Citadelle gin (44% abv), Canada Dry Tonic, and The Bitter Truth Lemon Bitters. Citadelle is made by the much maligned Maison Ferrand, but damned if it isn’t crisp and tasty.

@OdysseusUnbound I've been a fan of Citadelle Gin for 10 years. Very nice, and not expensive either.

While playing on-line poker with my brother-in-law and some friends, I finished off my bottle of Glenmorangie 14 year Port Cask Finish "The Quinta Ruban" - 46% ABV.

For a nightcap I had some Baron De Sigognac Armagnac 10. This was very hot and one dimensional when first opened but 10+ months on (with half a bottle left) and it is beginning to shine. Lots of almonds, marzipan and a praline note with hints of sweet wine. Not overly complex but very enjoyable and with one of those drying but moreish finishes. What a difference some air/time has made!

Im considering getting some more armagnacs now as the nuttiness is very appealing and it makes a nice, light change from whisky. I also just remembered I have a sample of a 25 armagnac (courtesy of @cricklewood - hope all's well, mate?!) that I've been hanging on to but would be great to try after a pour or two of this one. Maybe later ...

A little journey into armagnacs with a 10 and a 40 (correction!) year old - this is a real treat! You can see the colour difference and the first thing that I notice is that the older one isn't as oak heavy as I'd expected. It has a wee touch of something slightly blue cheesy or mushroomy but it's fleeting and certainly doesn't dominate at all - it really adds something though. A lot spicier and richer on the palate for sure.

The 10 is nuttier and fresher but lacks any real finish. The 40 has deeper wine notes and heavier, but not unpleasant, tannins - as one would expect, I guess? I'm also getting a dry cola note, licquorice, burnt vanilla, lots of dark chocolate praline (is that a thing?) and pepper.

They both have their charms but the 10 is definitely more quaffable and I love the marzipan sweetness it has. The 40 feels indulgent and something to kick back with, possibly with a cigar? But, given the age, I'm surprised by how 'easy' it is.

A little more abv (both 40%) would help on the finish and mouthfeel, I think, and it would be good to do this with two from the same house. Regardless, I think I'm getting a taste for this particular imbibement.

Big thanks to @cricklewood for the sample! I couldn't wait any longer, mate

about one month ago 9Who liked this? 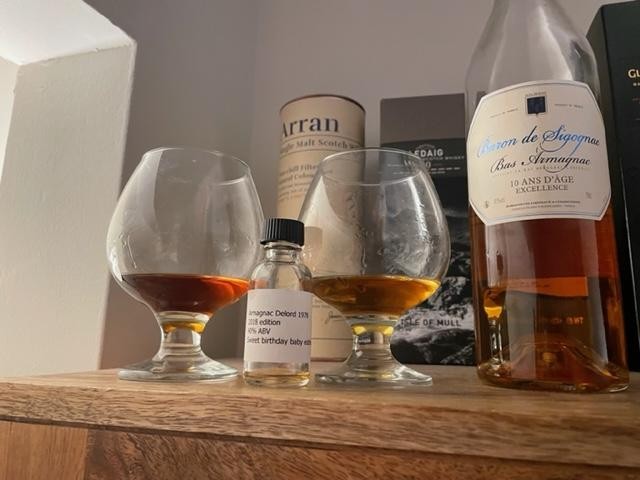 I’m dipping into the new Lot 40 Dark Oak. First impressions: the baking spices are more intense, and there are some apricot/peach notes present that I don’t get from the regular Lot 40.

My wife and I started off with a couple of Black Manhattan’s made with Maker's Mark Private Selection for BevMo! - June 2020 - 55.1% ABV.

I thought it was about time to sit down for a drink with my mate Pete. Finishing of a few samples from online tastings with whisky friends. Talisker 8 (special release 2020) 57.9% rum cask finish. Port Charlotte MRC:01 59.2%. Scarabus Batch Strength 57%. Port Askaig 100 proof 57.1% Kilkerran Heavily Peated 59.7 (batch 3). No losers in this bunch and hard pressed to put them in order of preference. The PC MRC:01 is probably the most layered and complex and stands out from the pack due to the caks difference. I wanted to put the Scarabus and Port Askaig head to head as I'm sure the PA is Caol Ila and assumed the Scarabus was too, but it deffinitely isn't. Pretty sure the Scarabus is Lagavulin. The KK HP is so creamy. Like smoked vanilla pods in cream. It has that macine shop character that I love too. Nice to catch up with Pete 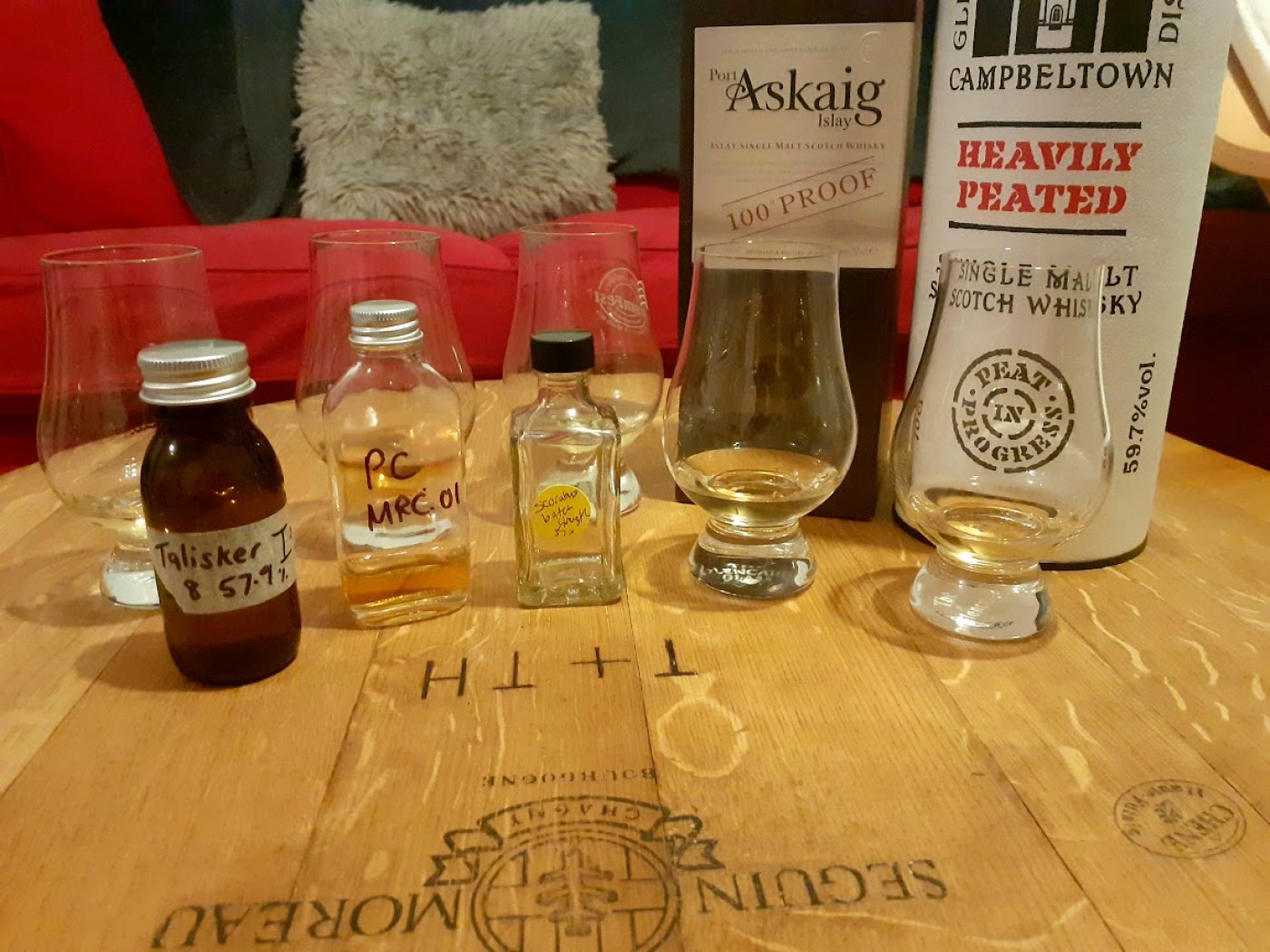 @Hewie - what a line up! I'll have to look out for that Scarabus now.

@Hewie Wow! That’s my kind of lineup. There’s nothing there that I wouldn’t be happy to imbibe.

Last night, my wife and I had a couple of Jerry Thomas Manhattan’s made with Rittenhouse rye BiB before dinner.

Started with a couple of Black Manhattan’s made with Maker’s Mark Private Selection for BevMo!

Finished the night with a sample of Highland Park 21 year (2019 release) from @jordytropp. The nose is subtle with vanilla and slight smoke. This continues on the palate, but is much more amplified with the addition of a tropical note and a creaminess to the vanilla as well as the peat and smoke intensify. This is an elegantly balanced dram. I wish there was a little more on the nose, but the palate makes up for it. Thank you @jordytropp for the generous sample!

@Victor Is it still available? I have not seen it for a few years and have only one bottle left.

I've obtained all of my bottles of 57 N from abroad, 1) my first 700 ml bottle was hand-carried from England, and 2) I acquired five 1 Litre bottles purchased over 2 trips through auto Travel Retail on the Canadian side coming into Buffalo.

@TracerBullet I’m jealous. At least you have one bottle left. Enjoy. Slainte.

@Victor @BlueNote Am I to understand that this has been discontinued? FOR SHAME! While I have not yet tried my bottles of the 8 and 15 YO CS, the 57N is a well-appreciated bottle in my cabinet (if not often opened). I'm so glad my sister in law muled be back a bottle that I sent to her hotel when she flew from Calgary to Iceland via (!!!!!) London England...

@Nozinan Probably not discontinued, but definitely scarce in this part of the world.

@Victor Too bad it was never available here. My last bottle came from a friend when she was traveling. Wish I had asked for two!!

I get the impression that Talisker produces only the occasional batch of 57 Degrees North. Why do I think that? Because the wine-searcher.com listing, below, lists as vintages only 2008 and 2000. Maybe there has been at least one new batch since 2008, or maybe not, and they just release this whisky in relatively small amounts through relatively few outlets.

@TracerBullet "Wish I had asked for two'" I've said that more than a few times over the years.

It’s been really rainy and windy for the past few days, so it was time to open an appropriate bottle for this fall weather.

This is perfect. Classic Laphroaig on steroids, but even at 60.1%, it’s not hot. No water needed, in my opinion. The finish goes on and on and on. So good, I had another.