Average score from 3 reviews and 10 ratings 78 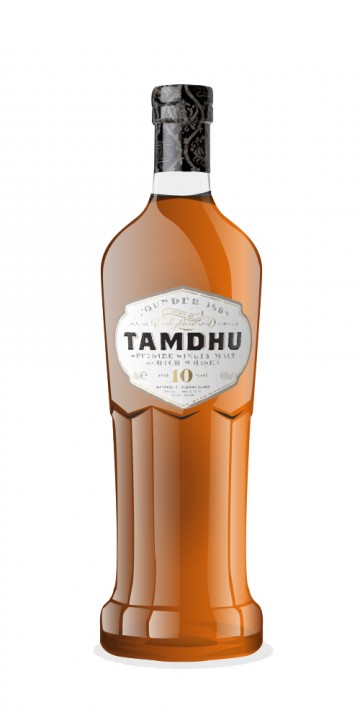 Tamdhu comes from Gaelic for “little dark hill”. This distillery was founded in 1897 and has been mothballed 3 times since. Located in the town of Knockano it is a distillery which finds most of its whisky used in blends such as Grouse and Cutty Sark. Since the relaunch in 2011 it has really pushed on and this culminated with it being nominated as a TWE Whisky of the year 2013. Matured exclusively in sherry casks (primarily first fill) it is the colour of dark amber in the glass and has a welcoming nose.

In the most it is more zingy than I expected from a 40% 10 yr. Orange zest, toffee, sherried fruits, spiced with a peppery oak tang.

It is very moreish, quite drinkable. A solid effort for an entry level malt.

Since Ian MacLeod took over the distillery, the Tamdhu range has been overhauled with a completely new, rather retro look. The entry level malt is this Tamdhu 10 Year Old, matured on sherry casks. I put it head to head with an older bottling, released in its day for the Italian Cinzano.

The nose is soft and round on all kinds of sherry influences. Think sultanas, orange peel, honey, roasted almonds, pink lady apples and cold coffee. A clear hint of candied ginger. Unfortunately also some rubber tyre.

It is quite oily and mouth coating. Nicely spiced on ginger, nutmeg and vanilla. A little bit of pepper as well. Very sweet on caramel and said vanilla, before the oranges counter this.

In the fairly long finish, the spices rear their heads again, but it also becomes quite dry and grassy.

Not half bad for an entry level malt, but having said that, I have had much better Tamdhu as well. Around 42 EUR.

According to internet sources, Tamdhu Distillery closed down in 2010. It was sold to Ian Macleod Distillers in June 2011 who plans to “vitalize its production of single malt.” There are no reviews for the 10-year expression of Tamdhu, but judging by other reviews on the internet, the 10-year-old is the continuation of the no-age-statement whiskey, already described on the connoisseur website a couple of years ago. I bought a cheap bottle at the local liquor store ($29.99). It seems there are a lot of barrels around, and the 12-year-old should be out pretty soon. Time is favorable, but does it make a better whiskey? I read some of the reviews of the younger expression. Unfortunately, there is not much to add. It seems that two more years of aging have not had a considerable impact on the whiskey. Nose: some malt, a little grassy, but not too much, a lot of grain, honey, “alcoholic,” not much more than that. Palate: sweet, very sugary, slightly bitter, alcoholic taste. You run the risk of sipping it too fast because you are searching for something and you are not able to identify it. Finish: very short, leaves a burning sweetness in your mouth, not memorable at all.

I have read quite a lot of reviews on the connoisseur site. Some were very detailed and informative. I could not help, but for this whiskey I do not have many words. Not very impressive or complex. It is a nice sweetness, but rather flat. A little bit of smoke or fruitiness would be helpful. Supposedly, the Famous Grouse line does a better job. One last point that really annoyed me. Have you ever opened a bottle of single malt and the glued wooden cap just got off the cork? The bottle in my cabinet is cork only now. I peeled of the remains of the sticky, dried-out glue. What is going on? Cutting down the costs for corks? The Chinese people may forgive me for the use of this stereotype, but is this made in China? Where does Tamdhu get its corks from? Or have I been the victim of a rip-off? Hopefully, Tamdhu (“the little black hill”) is not going down the hill. Or would it be up the hill backwards?