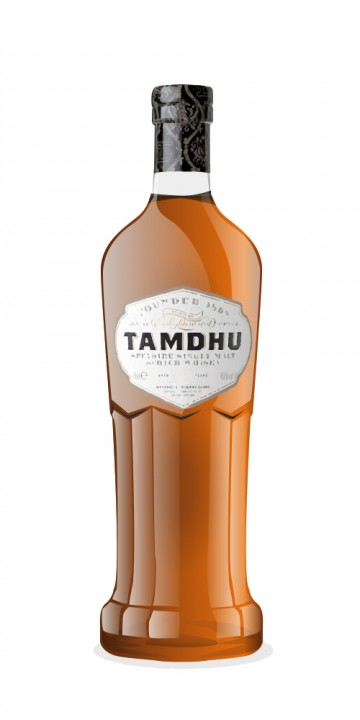 This is an older bottling of a 10 Year Old Tamdhu, released in the 1980s for the Italian Cinzano. I put it head to head with the current version of the same whisky, recently revived by the current owner Ian McLeod.

The nose is quite special. It is sweet, malty, with clear sherry influence, but it also shows a weird egde as if from a swimming pool. That probably sounds bad, but it does work in a very strange way. A sour touch, but not disturbing. Nice hint of roasted almonds and a leaf of mint. It does show a bit OBE, as if it was poured from a can.

Ouch, on the palate, the OBE is omnipresent. Rubber and metal. Pity. Once you get past that, you first get something sweet, then something a bit salty. Sweet from the yellow fruit (hardly recognizable apart from some oranges), salt as in seawater. Becomes quite dry and green. Think garden herbs. Sage, rosemary and maybe even some parsley. Green tea? Loads of oak towards the end.

The finish is long and dry on spices and cold coffee.

I had expected a lot more from this, but apparantely my sample came from a bottle that has been open too long. Damn.

The nose is very fresh and fruity, completely clean. There is a sea breeze hidden behind the vanilla and flowers. I get honey, cereal, a touch of citrus and lots of character. This is a very pleasant surprise indeed.

On the palate, the dram is creamy, feisty and complex. It has something of white wine in it – in a good sense – grasses and flowers… Flower power! Sour and sweet fight for supremacy.

The finish is soft and medium in length.

Either the mash bill underwent serious changes in the last four decades or the used casks were of an entirely different stock, but this Tamdhu puts the current NAS and 18 Year Old to shame… and then some. This is a very good whisky.

It's sad when distilleries go this far downhill...

This sounds delightful. When you get a sample of something like this don't you wish you could get hold of a full bottle...