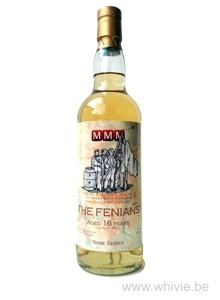 Every year Manny and I try to put an odd one out in our series. In the Animal Series it was the French Armorik single malt, in the Galaxy Series the Invergordon single grain, in the Antarctica Series the Tennessee whiskey and this year… an Irish single malt! We dubbed it the Fenians. Originating in Irish mythology with the Fianna, the term derives from groups of legendary warrior bands following Fionn mac Cumhail, with their associated mythological tales, known as the Fenian Cycle. The term Fenian today is seen as a derogatory sectarian term in Ireland to refer to Irish nationalists and/or Catholics, particularly in Northern Ireland. The term has been used similarly in Scotland as a slur to refer to Scottish Catholics or Scots with Irish ancestry. The label was again designed by the indomitable Jurgen Robyns. Our Irish malt matured for 16 long years on a bourbon cask.

The nose is wonderfully waxy on white fruit, kiwi, banana and mint. Some apricots and peach. A herbal side kicks in: buttercups and ferns in the sun. Finally some almond shavings. Oi, summer is not over yet!

Sturdy arrival on the palate with a lovely spicy edge on white pepper. Quickly it becomes a small fruit bomb on white fruit, banana, gooseberries, grapefruit, litchi and the peel of papaya. Some white chocolate with marzipan. Mint kicks in. Boy, oh, boy, this is very good.

Wonderful medium long finish that is both warm and fresh at the same time, with a floral note at the death.

We are very proud on our Irish discovery, for this fruit bomb will keep a smile on our face throughout the Indian summer to come. Delicious with capital D!