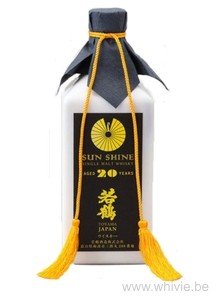 I hear whisperings that this Sun Shine is not imported whisky, but actually distilled and matured in Japan. Could this be the case? Wakatsuru Shuzo was founded in the 19th Century as a brewery, making mostly sake. Only in 1952 did they start producing. But in 2016 a crowdfunding campaign was started to renovate and relaunch the distillery. They have already released a few single casks from the 1990s. They also have put out a blend ‘Moon Glow’ last year. But those are old stocks to be sure, because the crowdfunding funds also went to the purchase of new stills. Anyway, this is their Sun Shine 20 years old 1995, presented in a ceramic bottle.

The nose is sweet and sour on apple sauce, gooseberries and lemon juice, but also very woody. Lots of white wood, freshly sawed planks and wood shavings. And a touch spirit as well. Fresh and summer, but lacks the finesse that we have come to appreciate from the big players.

Nicely oily on the palate, but now shows a chemical side that I really do not like. Sweet on white fruit and citrus again, but very bitter from the wood and that chemical sweetness starts to disturb with a vengeance from the second sip forward. Some caramel and honey try to save the day, but to no avail.

In the medium long, softly spicy finish, it’s all about wood and bitterness.

You’ll pay between 350 and 500 EUR for this bottle nowadays. Nuts. And a bit embarrassing, in fact. Nevertheless, thank you for the sample, Andy!