February 26, 2018 I joined about 50 people listening to WhistlePig Master Distiller Dave Pickerell give a presentation about WhistlePig, Hillrock, and Ragged Branch whiskeys, all for which he has acted as Master Distiller. I asked him half or more of all the questions asked by the 50 people present, and stood about 5 feet away from him the whole time. He told me:

2) that ADL "flavouring whisky" is 100% rye which is twice distilled, first in a column still and then secondly in a pot still. I did not ask him about whether or how much of the rye component was malted vs unmalted rye. I would have if I had thought about it

4) the recent first release of WhistlePig Farmstock consists of a) 49% 5 year old ADL whiskey, b) 31% 12 year old MGPI whiskey, and 20% 1 year old whiskey from their own WhistlePig Farm distillery which started distillation production 2 1/2 years ago, in late 2015

5) successive years of WhistlePig Farmstock will increase the percentage of whiskey from their own WhistlePig distillery until it reaches 100%. This has been Mr. Pickerell's goal and the goal of his partner from the beginning

Where is WhistlePig aged? The answer is not so simple. It depends upon WHEN the particular batch of WhistlePig was made:

6) Dave Pickerell's experience taught him that the way to avoid excessive tannin in a rye whiskey was to age the whiskey for no more than about 5 years in a single barrel. WhistlePig 10 yo is double barreled, using two new oak barrels sequentially. The first barrel is lightly charred to preserve the tasty esters. The second barrel is heavily charred to extract more wood flavours.

7) for the first few years of WhistlePig production, Dave Pickerell hand-picked flavouring whisky casks at ADL himself among already barreled product, and both barrelings were 100% aged at ADL

9) for the last "several" years, in Mr. Pickerell's words, WhistlePig has secured distillate only from ADL, which was shipped in tanker trucks to WhistlePig Farm, at which 100% of the two sets of barrelings was undertaken, and 100% of the barrel-aging was accomplished

10) the older-aged WhistlePig whiskeys, e.g. The Boss Hog, were also made in the same manner, although I did not ask, and Mr. Pickerell did not mention, whether he used a third set of barrels, or made any other changes to avoid aging the whiskeys for more than 5 years in a single set of barrels

11) so, over time, WhistlePig went from 100% Canadian produced whisky (to US specifications), merely bottled in the US, to Canadian distillate 100% aged in the US in barrels selected within the US

@Victor, thanks for the lowdown on WhistlePig. No surprises there as WP has run the gauntlet from cherry picking barrels to buying distillate to bottling their own distillate in a blend.

David Pickerell seems very forthcoming, unlike the shroud of secrecy that surrounded the source of WhistlePig whisky in the early years.

ADL doesn't malt their rye, as a matter of fact, they make an unmalted barley (Masterson's) which is an interesting whisky.

The double distilled rye, column then pot, is also how Corby's makes their Lot No. 40 100% Rye. The characteristics of the grain are retained in the second pass (pot still) and the style of still greatly enhances the flavour as well.

@Victor, did you get a taste of WhistlePig Boss Hog, The Dark Prince 14 YO Straight Rye?

@paddockjudge, thanks for joining in. I find it extremely significant that Dave Pickerell was not only using the choice most flavourful whisky which Alberta Distilling Limited makes, but that he had his choice of what he considered the best barrels of that flavouring whisky. This is the relationship which the Van Winkles have with Buffalo Trace with respect to their barrels of wheated bourbon.

We were not offered a taste of The Boss Hog The Black Prince 14 yo at the tasting yesterday, but I have tasted that one twice, once at North Charles Fine Wines and Liquors the day after US Thanksgiving Day, and also at the Four Seasons Resort Scottsdale last December. It is delicious to be sure. And VERY expensive. I saw a guy leaving with a newly purchased bottle of it yesterday in Rockville, Md. Our local price is $ 569.99 plus 9% tax.

@Victor, this type of information is so very rarely shared on this forum. Again, thank you for sharing. Did I ever mention that ADL is my first true love when it comes to rye? ;) 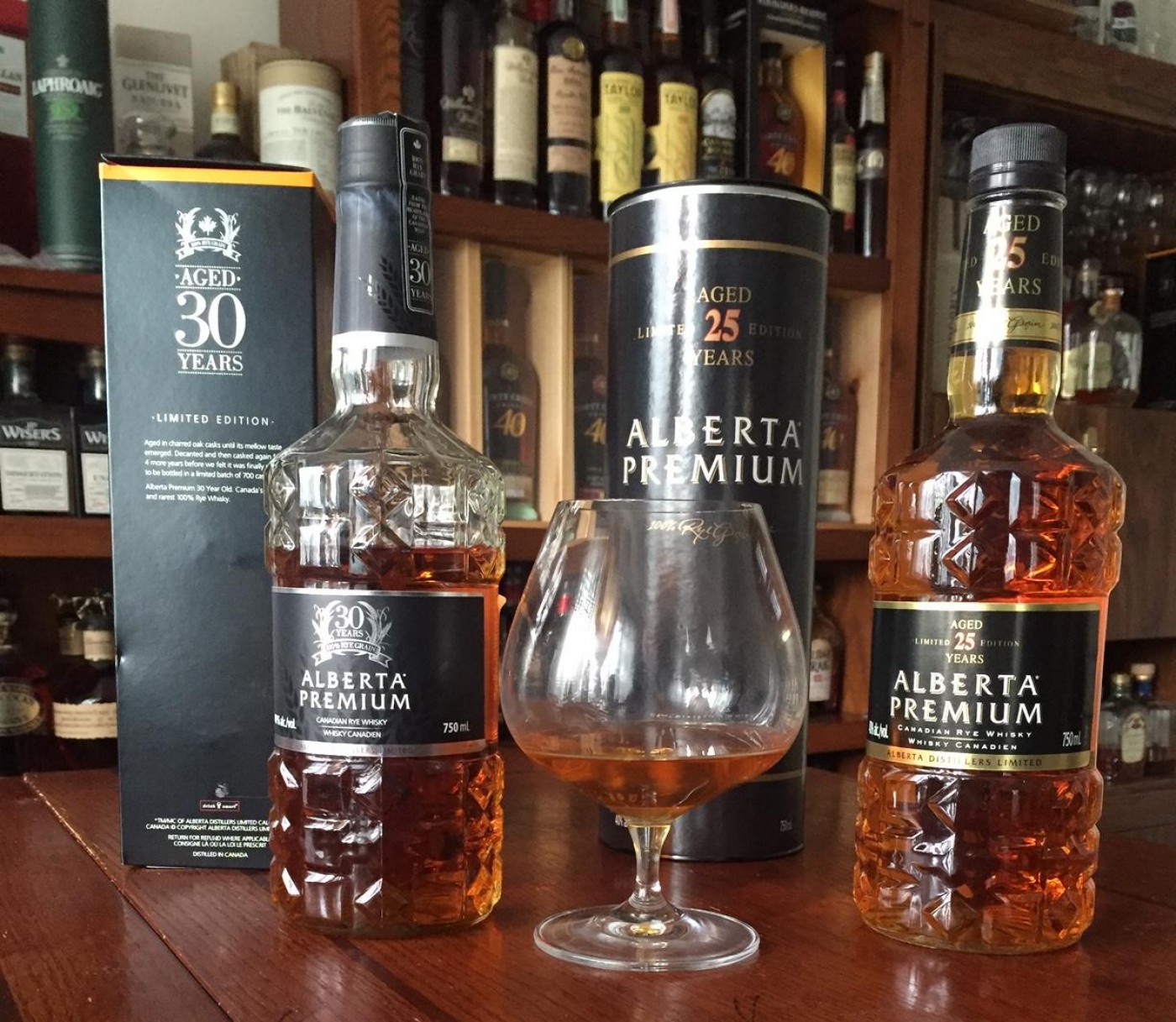 @paddockjudge Ahh, to be in the room with those bottles and that glass...

@Victor, thanks for sharing the info you obtained during your Q&A. From what I've seen online Dave Pickerell seems to attend a lot of whisky festivals and events and doesn't shy away from talking to whisky folk.

I really like the ADL style of rye and from some intel I've gathered (Davin and a few other online murmurs) it seems Suntory is finally supposed to release a teenage rye using their flavouring stocks. As to when, at what abv and price point this will be presented remains to be seen.

@paddockjudge you sly/smart devil, stocking away these ADL gems. We will never see such aged stocks released and certainly not at that price point.

@paddockjudge, why yes, I do believe that you have mentioned that ADL is your first love in rye whisky. I have long been a fan of ADL too. I wrote the very first Connosr review of Alberta Premium, as a matter of fact. What I would like to see out of ADL is releases of their flavouring whisky only,...which is what WhistlePig and Masterson's do. The price will be higher without the blending whisky thrown in, no doubt, but I think that the market is now mature enough to be willing to pay extra for "the good stuff".

One thing I didn't mention in the 12 earlier points is that in their Farm to Table approach, one of the things of which WhistlePig Farm is most proud is that they are using oak tree cooperage grown on their farm for their barrels in the Farmstock releases. The Terroir characteristics coming from their own wood emphasise cloves and cinnamon.

One correction: my notes say that Dave Pickerell said that the second barrel for maturation of WhistlePig is not new oak, but is a once-used heavily charred bourbon barrel.

@Victor, once-used heavily charred bourbon barrels will certainly reduce the tannins, compared to new barrels, in the second maturation of WhistlePig...Cave Baestiam, we know what another five years in already used 25 YO barrels did to AP 30...it is a fine line. It makes me wonder if the re-gauged 25 YO barrels were charred, hmmm?

Cloves and cinnamon from the Vermont Oak could prove to be interesting.

@cricklewood, the rumor of aged stocks being released from ADL has been floating around for years. I can't wait. Did you hear the one about the fork lift operator that pierced a settling tank and dumped a gazillion liters of well-aged Alberta Premium into the sump?...or that there remains some of the original bond lot that begat AP 25 and AP 30....I can hardly wait.

@paddockjudge Dave Pickerell seemed to want to attribute the cloves and cinnamon of the local terroir influence to the grain used, but I don't see how that could be the case. I was not in a position to have a long nuanced conversation with him on that or on any other one particular point.

@Victor, interesting about the grain. I've had wild rice (grass) blends that were nutty and creamy when cooked. The Vermont WhistlePig should prove to be interesting.

The name WhistlePig was chosen by business partner Raj Bakta. He was hiking deep in the Colorado Rockies when suddenly he was greeted by a seemingly crazy old man, who asked him, in a strong accent, "Could it be a whistlepig?"not understanding who or what Raj Bakta was...and soon disappeared. Bakta found the experience surreal and a sign from the heavens. Here is more on that story and WhistlePig:

A whistlepig is actually what is called in North America a ground hog, or wood chuck. The winged porcine countenance on the bottles of WhistlePig and The Boss Hog is actually their WhistlePig Farm first and most beloved pet actual pig, Mortimer. The wings symbolise Mortimer departed to Pig Heaven, and one of the releases of The Boss Hog was named "The Spirit of Mortimer". (I've tasted some. The Spirit of Mortimer is delicious!)

Dave Pickerell affirmed when I asked him about it that he had indeed known and dearly loved Mortimer the Pig.

Was lucky enough to get a bottle of WhistlePig rye this Christmas a private barrel pick for a British group 10 year old 115.5 proof and absolutely delicious. Not had much rye experience but this beats the JD single barrel rye hands down, it was on the pricey side though at £110 but well worth it.

@Pete1969, thanks for sharing. It is good to hear that you have the experience of a nice bottle of WhistlePig! I have liked every taste of every WhistlePig that I have ever had, up around 10 different expressions. When people ask me for the bottom line on WhistlePig I always say, "WhistlePig is of high quality, and it is expensive."

Dave Pickerell I found to be an absolutely delightful guy, as unpretentious as one could be, and extremely knowledgeable. My first thought was, "This guy looks like Waylon Jennings!" which to me is quite a compliment. Picture a 73 inch tall 300 lb guy wearing cowboy hat, boots, beard, and blue jeans delivering his spiel in an upper-middle-class heavily Jewish and Chinese suburb of Washington DC. No BS whatsoever, and willing to answer every question asked in detail. I did not know what to think of him in advance, but I found him to be the most attractive speaker I have heard yet in the spirits industry. I am also extremely impressed by his abilities and would tend to trust his taste in spirits making. That Ragged Branch whiskey which he also makes is still young and for that reason quite limited, but I bet that that one too gets to be wonderful after he has produced some with a few more years on it.

I have watched a few videos of a number of distillers from the U.S.A and although I have not been fortunate to meet any they all come across as unpretentious, hard working and with a love for their craft. Maybe it stems from having to work from the bottom up and learning the trade by doing rather than reading a theory, nothing tends to ground a person better than hard work and strong values at a young age IMHO.