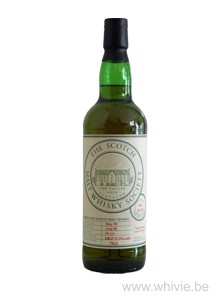 Who comes up with these names? This older release from the Scotch Malt Whisky Society – cask 33.70 – was dubbed ‘Keith Richards meets Socrates’. WTF? Keith Richards is the crazy guitarist of the Rolling Stones, obviously, while Socrates is an ancient philosopher from Athens. So… if they were ever to meet… this would be the whisky they would have? Anyway, I suppose it will be good? This was already the 70th cask of Ardbeg bottled by the SMWS, a little over a decade ago.

Oh, my! This nose is very aromatic with sweet smoke, bacon with honey on the BBQ and ashes. Dark and sweet plums and dates, while a light salty edge remains in the background. Without a doubt a sherry cask. It works!

The arrival is surprisingly soft (it is over 57% after all) but immediately very ashy and dry. Tastes as if I just put my tongue in the almost cooled ashes of a cigar (don’t ask). Smoked ham around a date, wrapped in a jacket of tar. Boy, you could light a barbecue with this liquid! Dark, sweet and mysterious. Impressive. The finish lasts forever and remains dark and sweet with loads of ashes and soot.

I have nothing with either Keith Richards nor Socrates but this malt impressed the hell out of me. Lovely, sooty Ardbeg with loads of sherry influence. The best of two worlds. But nowhere to be found now. How typical…