Average score from 5 reviews and 5 ratings 87 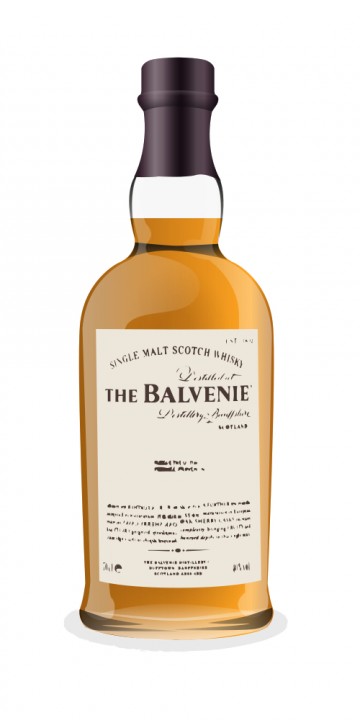 I’m sure a cow is involved in the manufacture of this whisky. Very creamy malt with lots of beautiful balanced flavours. Nice to see Balvenie bottle at a reasonable percentage too as it gives what could be a subtle malt some real vigour. Nose: Vanilla, sultanas, cream and hints of white wine. Very clean aroma. Taste: Creamy and warming. Flavours include cinnamon, strawberries, dried fruit and malt. Finish: Dryer on the finish with the fruit still present.

@Foster I agree it certainly has punch in the delivery. For something not actually cask strength 47.5% is pretty high. This is my favourite Balvenie of those I've tried so far.

@Uisgebetha a nice dram that has punch in delivery. I felt it tasted stronger than 47.5%

This malt is getting only harder to find, so this review is mostly for people wondering whether it's worth seeking. I bought this Golden Cask after trying the “mere” Caribbean expression of the same age, figuring "why not move up to 'Golden'"? I was unable to find good comparisons the two, but existing Golden Cask reviews gave me the impression that this would be richer with "rum spices" and somewhat bolder in fruit. Let's see.

Nose: Quite light (as was the Caribbean). I find the aromas develop in the order: Brown sugar/honey, lemon drops, menthol, underripe banana-green pear skins. Maybe unsalted butter and a hint of that aroma found in Juras. Water doesn't do much. Overall, very light with fruits and anesthetically fresh. I'd expected more significant banana richness.

Palate: Overall leafy and woody-- and surprisingly dry. The entrance is grassy: less sugarcane than sap from its leaves. The leaf impression becomes woodier, a little like biting into bitter cinnamon bark. Bitter-sour-minty. It ends not with banana, but more like a banana-tree leaf. Water is needed and helps bring out some honey to balance out the otherwise bitter complexities.

So all-in-all, the Golden Cask was a little disappointing for its woody dryness. My rating applies to the addition of water, which greatly improves it by diluting those bitter edges into curious complexities, while also adding vanilla and honey balance. Nevertheless, I would prefer the flavors of the Caribbean Cask, which was equally light but better balanced. However, I am continuing to store the Golden Cask to track its development. See my follow-up in the comments section….

The most similar malt in character is probably Glenmorangie’s Astar. The Balvenie is not as strong, but so far I find it better balanced.

Follow-up: The bottle was 15cl empty and left for half a year, from autumn to spring…. (Water is still recommended.)

Nose: It is closer to my original expectations, with built-up vapors like a strong egg nog: vanilla custard, potent nutmeg and some allspice, and spirity rum aroma. Another slow breath brings a fraction of those raw greens smelled in the fresh bottle, giving some impression of a young throat-burning liquor. (So yes, a very strong egg nog indeed.)

Palate: Banana leaf still persists. The entrance is underripe banana. Then a wave of spicy and leafy flan. Nutmeg and (to a lesser extent) allspice build substantially everywhere, especially around the uvula. (With a bigger sip, the spices arrive earlier and overtake the mouth.)

Finish: Some young booze in the pit of the throat. The spices seem to dry most of the tongue, and leafy vanilla lingers in the throat.

Time has done some good. The fresh bottle’s lemon and menthol are now gone from the nose, and there is less grass and pine in the palate. The malt also seems less light than before. So I have elevated my score by a couple of points. Let's see whether it keeps increasing....

Thanks for your in-depth review and follow up of this and the Caribbean cask. I have a bottle of each and look forward to opening one soon. This is a profile I really want to try and will do so when my open bottle count decreases . Which would you recommend to taste first?

This is the first whisky I have ever bought, and so it seems only fair that I also write my first review about this fine dram.

Nose: At first very simple and light: flowers, dried fruits, vanilla, and even hay. Then a few "darker" aromas kick in: Almonds, raisins, caramel and nutmeg. Finally a whiff of wood. Seems deceptively simple at first, but then grows in complexity. I feel like there's still plenty of aromas, which I haven't identified yet. I could spend hours just exploring the nose of this whisky.

Palate: It lands soft and creamy on the tongue. I immediately feel the "balance" of this whisky. The "fruitiness" is excellently balanced by the alcohol, 47.5%. The fruit and spices dominate at first. Pears, oranges, cinnamon, almonds, and raisins. Then it dries up and you immediately start tasting the wood from the barrel, nice dark chocolate, caramel.

Finish: Long and balanced. The fruits and spices nicely blend with the dark chocolate and caramel. Oak and wood.

Notes: What I really enjoy about this expression is the balance between the initial "fruit and spices" and the dark, dry tastes that come later. Although it can seem almost too light at first the long, dry finish complements the lightness perfectly. The somewhat higher alcohol content helps to give a potent kick and warmth. Makes me think of a summer sunset at the beach.

This 14 Year Old Balvenie is only available in the Travel Retail segment. It was finished on Caribbean rum casks, lending it a nice golden sheen. Hence the name GoldenCask. It was bottled at the slightly higher than normal drinking strength of 47,5% ABV.

The rum shows itself early on the nose. Light brown sugar, banana, dried fruits, cinnamon and a whole bunch of nuts. On top of that, the typical Balvenie sweetness of oranges and vanilla is added. Taking a profound whiff rewards you with a wonderful hint of peat and pipe tobacco. Very complex.

It has a good body and great mouthfeel. Creamy, almost buttery. Immediately honeysweet, followed by the spices from the nose. Slightly peated, or so it seems. A perfect continuation of the nose. Midpalate, I make associations in my mind of sugared orange peel.

The finish is not overly long, but very sweet and warming.

This is candy whisky. Seems perfect with dessert or a big cigar. For the sweet teeth among us. I am one of them.

Complex nose. Slightly floral. Slightly fruity. Smooth delivery which leaves some spices at the back of the throat. Rich nutmeg, all spice, pine seeds. Mixed in chocolate and raisins. The rum casks play their role admirably without appearing too boisterous. Didn't expect something so complex from something this young. A beautiful mix of dry fruits and flowers. A splash of water will open up and magnify all the flavors.