Average score from 3 reviews and 3 ratings 91 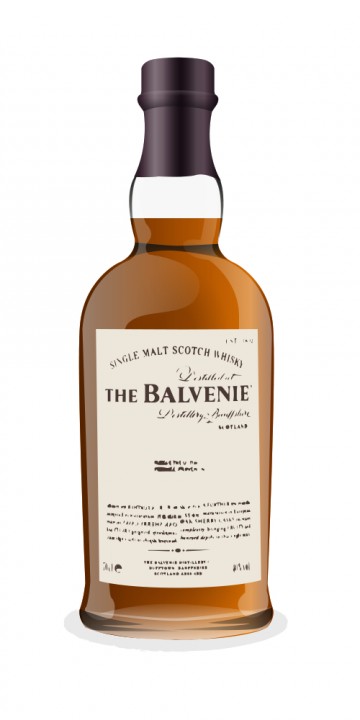 I had been no less than 4 years since I last tried the Balvenie Tun 1509. I thought that was great. By now even the 6th batch has been released. But allow me to try the second one. The tun 1509 is four times the size of the famous run 1401. This second batch, which appeared in 2015, was created with 23 American oak casks and 9 European sherry casks. I wonder if David Stewart – by now enjoying his pension – outdid himself again.

Oranges and mandarins is the first thing I detect, drenched in dark honey. That is followed closely by lots of nuts, wild flowers, apricots in their own juice and a note of vanilla. Hints of gooseberries with a pinch of white pepper and some ginger. Pretty zesty, in fact. After a few moments, some apple sauce appears. After breathing for a while, it even sports some barley sugars and a salty note. Very nice, complex and inviting.

Beautifully creamy on the palate. Again the oranges come first, but after the second sip the apricots, mirabelles and sultanas rear their heads. Next to ginger and white pepper, I also get cinnamon and a bit of salt. Maybe even some quinine. Hint of tobacco leaves. Lightly bitter, but the fruit dominates.

The finish is long, warm, spicy and almost syrupy. Honey and citrus until the end, but the oak has the final say.

Very good stuff. Just as good as the first batch. You can still find it, but it will set you back some 300 EUR.

David Stewart, the Master Blender at Balvenie, has his own favourite marrying tun. You have guessed it, it is the Tun 1401. In i the married several specially selected casks for about three months to create this special whisky that has proven to be very popular. Seven batches of this Tun 1401 has already been released, but not all of them for the same market. The newest, batch 7, is only available in Travel Retail and will thus only be purchasable in selected airports. I go back to one of the early days, released in May 2011. Batch 2 is 22 years old and a marriage of 7 bourbon casks and 2 sherry butts.

On the mildly prickly nose I get a lot of Furniture polish to begin with, followed closely by raisins, almonds and acacia honey. Gingerbread. Candied, sugared orange peel. Pineapple cubes. Slightly floral. Dried grasses. Soft on the spices. Nice balance.

It glides silky soft over the tastebuds and delivers a spicy kick, mostly ginger, nutmeg and pepper. Then the orange peel returns, but this time it is not candied, but zesty. A slight bitterness. Honey. Apricot jam. Dries slowly. This does not need water.

Unfortunately I cannot compare to other batches, but if they are all of similar quality, then you are looking at a top whisky range! When it first appeared about two years ago, it was available for just under 200 EUR. If you want to get your hands on this bottle today, it will set you back more than 500 EUR. Ouch! Thanks, Casmasjien, for the sample.

The Balvenie Tun 1401 is a relatively new release, and is very intriguing since batch #1 was highly acclaimed (Sadly i did not get to try that one, and it’s now all gone). So what is Tun 1401? basically it’s a special vatting of hand picked casks by the Balvenie malt master David Stewart. David selected 10 casks from the entire aging stock at the Balvenie warehouses to be vatted in a very big liquid vessel named a “Tun”. This Tun, is made of wood, and inside the liquid from all casks is allowed to “marry” as we call it. The whiskies were allowed to marry for about 3 months, after which they were bottled. The cask selection is indeed interesting : the oldest is a 1967 cask, where the rest are 1970’s and 1980’s casks. Cask type is also mixed with 70% ex-Bourbon and 30% ex-Sherry. What a lovely combination of casks, it really is thrilling to be able to try this one. And boy, it did not let me down. This batch consists of almost 3,000 bottles to be distributed in the UK and the rest of the world, with a price tag of £150. Let’s try this one.

Nose: thick rich honey with a lot of cinnamon spice. Coconut , vanilla, cloves. Some dried fruit also enter the "party". A terrific nose. Stunning. No less. This is a all i look for in a nose. sexy and luscious.

Finish: Long with Dried mango, and spice. yes, simple and on the money.

I’m a big Balvenie fan, but this is cracking stuff. I’ve not had a better Balvenie. Period. It’s so harmonious, so whole.This is as closed to perfection as it gets. It really is a stunning whisky. Balanced, with a terrific nose, excellent palate, and breathtaking finish. Perfect.

I would like a taste, no, make that a bottle! @galg, it is great to see you get so enthusiastic about a whisky.