Where there's one spirit, there has to be another one. I feel like rums are like Portuguese wines of the spirits world: beautiful, overlooked and great value. So WHAT ARE YOUR TOP 3 RUMS? For me it's Appleton 21 (to be savored on its own), and El Dorado 12 (a nice lady-pleaser with its sweet character and a lovely rum to pair with cigars, in my opinion) I'm still searching for the third=)

I got a little taste of Lemon Hart bottled at around 75% - It was fantastic. I tried another at the same tasting, not quite as high proof but it was also great...Smith and Cross. 57%. Amazing nutmeg notes. Makes a great banana Flambé. That was in May 2015 and I have not been without a bottle in my home since. If only I could get my hands on the Lemon Hart...

Plantation Single Vintage range is fantastic and provides the greatest diversity if rum flavors under a single label.

There are also several rums with unique flavor profiles. Vizcaya Cuban formula is a vanilla bomb. Pyrat has an interesting orange character.

@Nozinan Those sound interesting! Thank you! I may seek them out! =)

@newreverie Thank you for your two cents! Plantation Barbados 2001, however, really disappointed me. It's like sugar syrup ( or maybe acacia honey) with some dried bananas and some vanilla, but not really that much complex or satisfying =( I love big flavors and a lot of spicy toffiness with lots of dried fruits, chocolate, all that good stuff. I would really love to check out cask strength rums you talk about. That would be interesting. Have you heard of Rhum 50 ABV. It is young french rum matured for 1 year and bottled at 50ABV. Its price right now is a steal, but I doubt the quality. It seems few people had tried it online

@newreverie As for Ron Exclusiva ! They add inverted syrup to this one. When I opened mine it was too immature on the nose: lots of raw alcohol. And of course there's a lot of E150a =(

Sippers that are always in the cupboard are El Dorado 12 and Mount Gay XO, occasionally get the Appleton 12 which my partner loves with a dash of Coke but I cannot get past the Jamaican "funk" so have not stepped up to the 21.

A personal favourite is Angostura 1919 love the tropical fruits and floral/perfumed aroma but it does split opinions.

Zacapa 23 is a must buy and hoping to pick up the XO this year.

I had a Havana Club 12 dessert rum I bought at the distillery in 2005 the only spirit my partner would drink neat but never seen it on sale anywhere else and it is long gone.

The Smith & Cross Navy Strength and Lemon Hart 151 which @Nozinan mentioned are favourites of mine. In the category of standard molasses-derived rum, I also like the somewhat obscure Dominican Club Anejo, and there have been others. In general I prefer the taste profile of Rhum Agricole, distilled from sugar cane juice rather than from molasses, to typical molasses rum. Clement and Depaz (French West Indies) have some great products there. If you get some standard amber Depaz, open it up, take a drink or two, and then let it sit for a few months. It will start out very tight and uninteresting and then become fantastic long-aired. I have seen that phenomenon repeatedly. In the unaged category I am a big fan of the Caipirinha, the Brasilian national drink made with Cachaca, a spirit made from sugar cane juice. @dramlette and I have many wonderful memories of Caipirinhas in Rio,...and at home. @dramlette got the bartenders in Rio who made our favourite iteration among many tried, to show her their technique. Turns out the Cachaca which cost $ 0.65 per Half-Litre at the grocery store (in 2002) made the best Caipirinhas!

@Victor Out of curiosity... if someone were looking to buy some Lemon Hart....where would one look?

@Nozinan, I am down to half a bottle or so. It was almost 3 years ago now since I bought mine. At the time, there was some in DC, but the 151 proof has never been common, and I heard rumours that it might be discontinued. I saw the low-proof Lemon Hart at LCBO. Mary Anne bought some. It is OK at low proof, but, like you, I like the high-test stuff.

@Georgy The plantation Barbados 2001 is sweet, but it needs to be experienced within the context of the other single vintages in order for it to shine. Barbados is a region like the Highlands of Scotland. I also have Jamaica, Panama, Guyana, Nicaragua, Granada, Trinidad, and Haiti. No two are alike and all are good. 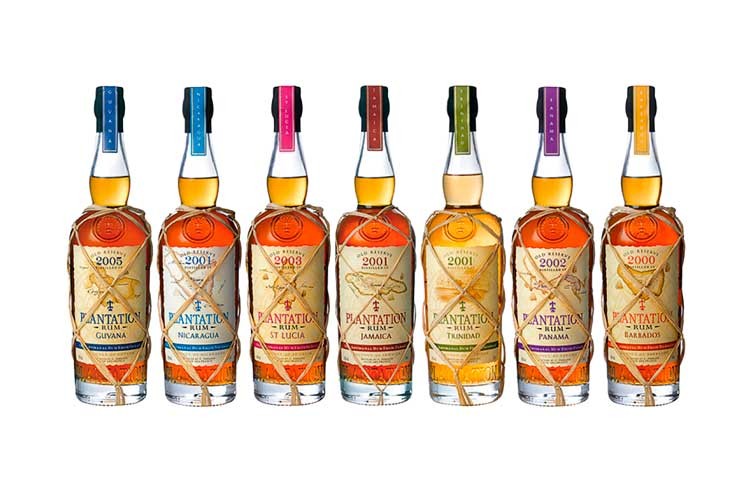 @Victor Clement XO and Homer are some of the most interesting Rhums/rums I've tried. The XO has a noticeable anise flavor and the Homer has orange zest.

@newreverie, good to hear. I'm interested in trying anything from Clement. You'll be astounded if you try the standard Depaz after six months bottle open. Absolutely splendid then...but not at first. That one absolutely requires the air time.

That Lemon Hart 151, which is a Guyana Demerara rum, also has very strong anise flavour. When I am in the mood for anise, which is sometimes but not always, I get a huge kick out of that one. Talk about bang for your buck sipping...it takes about 15-20 ml to get a very full dram of LH151. Lemon Hart 151 is incredibly intense,...intense like drinking Corryvreckan.

Speaking of 151 rum for sipping, I find Gosling's 151 to be a very satisfactory sipper too. That one costs $ 20 here currently, and at this point is very available.

@Victor Is that the Cachaca with the shrimp on the bottle called Pitu?

@newreverie, I have seen that Pitu Cachaca, but I don't think that I have had any of it. There are all kinds of exotic Cachaca agings going on in the last few years. I've got one or two bottles given to us as gifts with woven baskets attached and weird looking things inside the bottle. Should be interesting when we have some.

But do try the Caipirinha (Portugeese for peasant girl or country girl) if you are unfamiliar. The trick to a good caipirinha, other than the choice of cachaca, is to use only ultra-fine powdered sugar, and a good muddling of a whole lime in each glass, shaken, not stirred. For many years the Brasilians were embarrassed that the caipirinha was so popular, because it was a lower-class drink. Then they decided to embrace it and made it the national drink.

@newreverie, wow that is some variety of cachaca! Times have changed. A few years ago you just wouldn't see that.

Oh, one more muddling tip for caipirinhas and probably other drinks: a good WOODEN mortar and pestle is superior to the muddling task. Sure, you make do with what you've got.

Alcohol is a big deal in Brasil. Many, probably most automobiles there have engines which can run on any combination from 100% ethanol to 100% gasoline. Almost all of the gas stations have ethanol pumps in addition to the gasoline.

Brasil is a great and attractive country. Too bad they are screwed up in so many ways.

@Georgy Zacapa 23 is aged using a solera method as are some others eg Matusalem the age they quote is either the oldest rum or average age depending who you listen too, personally I err on caution and go with it being a few drops of the oldest in the bottle. Probably a decent mix of 6 - 12 year rum as the base though and very easy to drink neat not too sweet and you defo get the oak influence on the finish.

Not something to get hung up on though there are enough opinions on NAS whiskies that to start on rums would be a bind.

I generally find rum too sweet, but Caroni has rocked my world. Highly recommend the 17 year old. Unfortunately haven't been able to source the rarer releases.

Plantation 20th anniversary and Zacapa 23 are very nice rums. As my third I choose El Dorado 15, which I think is the best from that destillery (I find the 23 year old too 'thick').

Agreed @MuddyFunster, most rums are too sweet for me as well. Too sugary. There are surely some that separate from the pack though!

For the Ron Zacapa Solera, the older bottles are more impressive than the more recent bottles - I recall that Rum Howler noted it was likely due to increased distribution causing the use of a younger spirit (not dissimilar to whiskey)

@Alexsweden Often times the sweetness has more to do with sweetener being added after distillation. The regs on rum are pretty open, but most distillers go for a sweeter profile. If you ever have unsweetened rum it is noticeably more vegetal in flavor. I believe ministry of rum has a list showing how much sweetener has been added to most rum brands.

@newreverie Excellent point - most of the high-quality 'older' sipping rums have pretty high sugar additions (makes me appreciate the Mount Gay 1703 Old Cask just a little bit more). The age statements can be deceiving as well

@JayRain How would you describe Plantation 20 ? I wanted to give this one a go. It's really unfortunate that we don't have access to many of the big names that have been mentioned in this discussion. I would love to try navy strength rums, but they are almost impossible to come by =( as for Mount Gay, it's by far the "driest" rum I have in my small collection of Appleton 21, Mount Gay 1703 XO, El Dorado 12, Plantation Barbados 2001 with a lovely licorice flavor to it with nice oakiness and toffee. Lovely stuff. I, for one, don't really think that sweetness in rums is a drawback. It can add that extra something that makes the experience all the more pleasurable. After all...rums are made of sugar)

@Georgy It has been a while since I've had a sip of my plantation 20. I'll have some tonight and leave you a short review.

@newreverie thank you!=) Would really like to know your take on it)

Plantation XO 20th anniversary Sampled with my diplomatico rum glass. This rum has been open for about 2 years and the bottle is half full. Nose: Vanilla, fresh cut sugarcane (grassy and sweet). Light oak and scents of island breeze (coconut?) Taste: Gorgeous. Candied apple coated in an assortment of sugars and molasses. Savoring reveals raisin, wood spices, and cream. Finish: A little cloying. Light cinnamon and baking spices coat and provide tingling warmth. Balance: On the sweeter side, but it cuts a great line between smooth, sweet, and warming spice. A great sipper with enough depth to make it interesting. 87/100