Average score from 3 reviews and 3 ratings 82 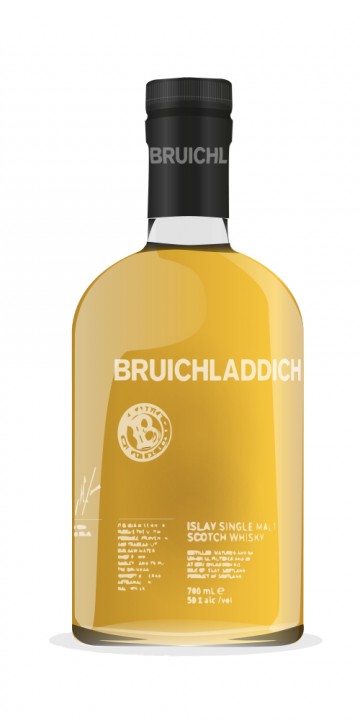 Nose is spicy and rich with american oak. Very weak aroma of gooseberries.

Flavours are straw, and light grain with a very dry finish, tickling the back of the throat with heat.

Took me a while to warm up to this one. It was very much affected by the wood and seemed overly dominated by vanilla. Now that it is down to the last third I am liking it better. Wouldn't buy it again though.

The Bruichladdich 16 year-old was introduced as a replacement for the 15 year-old expression. It has been aged in Jim Beam barrels and finished in Buffalo Trace bourbon barrels. It is unclear whether the Buffalo Trace barrels are first-fill, though “fresh American oak” appears on the label, which is certainly suggestive. Also suggestive is the prominent “1815” encircled by the phrase “George T Stagg Distillery Kentucky Since 1815”, even though that distillery has been called Buffalo Trace since 1999 and was built around 1870. Clearly, the marketers want to associate the extraordinary George T Stagg bourbon with this single malt Scotch.

The nose is both spritely and slightly resinous, with vanilla, caramel, fresh grapes and melon, some malt, and a hint of oregano (a familiar note to bourbon drinkers).

The palate is hot, but pleasantly so. There is bourbon vanilla, a bit of spice, and some sweetened cocoa. Interestingly, this whisky opens up considerably with just a dash of water, taking the edge off nicely. Walnuts—another common bourbon note—arise on the finish.

There are no traces of the rich, ryed, powerful, magnificent George T Stagg bourbon in the Bruichladdich 16 Year-old Bourbon Cask, presumably because the barrels did not previously mature George T Stagg bourbon within their hold. Nevertheless, this playful yet sophisticated dram highlights the notion that simplicity, even though it is not really Bruichladdich’s stock in trade, can often yield great results.

New glass, new note: oranges feature prominently and sweetly on the nose, and slightly sourly on the palate!

Bruichladdich and bourbon is so obviously such a wonderfully synergistic combination that it makes you question why, given their passion for cask enhancement, the boys from the Rinns haven't made more of their spirit's obvious love of American oak in the past.

This 16 year old spends most of its life maturing in former Jim Beam casks, before being finished in premium Buffalo Trace oak. The result is a thick, syrupy expression bursting with fruit, cream and vanilla. There's just enough spice and complexity on the palate to protect the experience from one-note simplicity, while the finish is sweet, fresh and long, with just a hint of new-mowed grass and sea air.

Sounds really nice. Haven't seen that bottling in these parts but I'll keep an eye out. Recently finished a bottle of the 1993 14YR Sassicaia barrels. Seemed to lack something. It seemed to be missing some fruit. Not sure the French oak worked here.