Average score from 4 reviews and 7 ratings 77 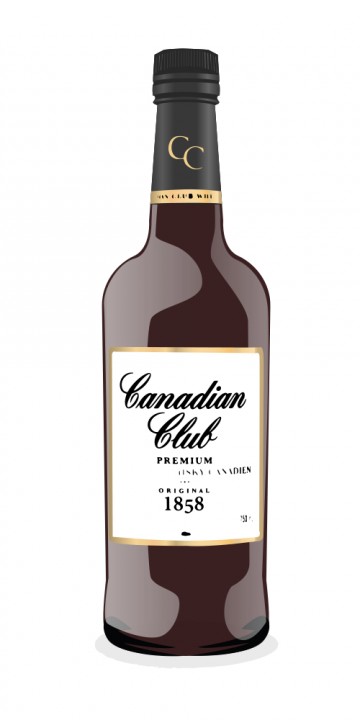 On the 1st of July, it is Canada Day. Enough reason to try a Canadian whisky. Let me start with the most famous, the Canadian Club, locally also known as CC or simply Club. It has been on the market since 1858 thanks to Hiram Walker. Walker was originally from Detroit, but moved north during Prohibition. When Al Capone is one of your best clients, you do everything in your power to keep producing. Today, Canadian Club is produced by Beam. It is barrel blended and matured for six years.

It smells fresh and fruity, primarily apples and almonds. Some icing sugar, too. But also something that reminds me of lighter fluid. From the herb rack, I remember vanilla and a pinch of saffron.

It is soft and has a mild body, but that is about it. Sweet, sure. Again some apples, but now also barley and corn. Spicy, though. Probably the rye in the mix.

The finish is short and clean.

It is quite understandable that millions of Canadians and Americans love this. It is a very accessible blend and not expensive. Typical summer dram, I would say. I would not mind adding a cube of ice to this (oh, blasphemy!). Probably good in a cocktail.

Overall I would say this is an OK blended whisky, probably good with chocolate -- for those who are into that sort of thing -- or being enjoyed on a beach somewhere hot. I'm not sure if I will purchase one of these again because it seems a tad too sweet and fruity for me.

Canadian Club fits comfortably between bourbon and Scotch. Best served over ice, it's a great introduction to whisky. A favourite of mine, I always keep a bottle in the cabinet, and use it to convert non-whisky drinkers.

Canadian Club fits comfortably between bourbon and Scotch. Best served over ice, it's a great introduction to whisky.