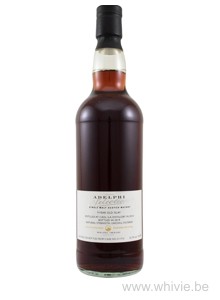 This single sherry hogshead of young Caol Ila was bottled for the 15th anniversary of WIN – Whisky Import Nederland – and yielded 295 bottles at cask strength. My buddy Marcel from Holland sent me a sample. And that’s a good thing too, for as you’ll soon find out, you’ll find this is another grand Caol Ila! The color, to say the least, is remarkable dark.

Grand, umami nose on roast beef, dried ham, lots of earthy notes, dried leaves, origin chocolate with a mildly spicy side (think cinnamon and pepper, but also oregano). Conspicuously devoid of sweetness, in my opinon. Arbroath Smokies, soya sauce, coffee grounds. Only after a few moments I get some hints of raisins and plums. Quite special, but Caol Ila is totally unrecognizable.

Surprisingly soft on the palate with a lovely creamy body. Immediately pretty peaty with sweet and sour notes, while a hint of plasticine and seaweeds takes your taste buds hostage. The spices are more outspoken now and next to pepper and cinnamon I also get some vanilla and cloves. Roasted hazelnuts, smoked fish, raw meat and rough sea salt. I am loving this to bits. The sweetness keeps you guessing, but midpalate some plum liqueur and brown sugar reveal itself. Again quite incognito.

The finish is extremely long, somewhat drying on salted meat and espresso. Candied orange peel at the death! That was fun.

Wow, what a ride. But those who claim to recognize Caol Ila are liars (I mean that in the nicest possible way). Nevertheless, the Vital Spark was just a tad better. Thx, Marcel!